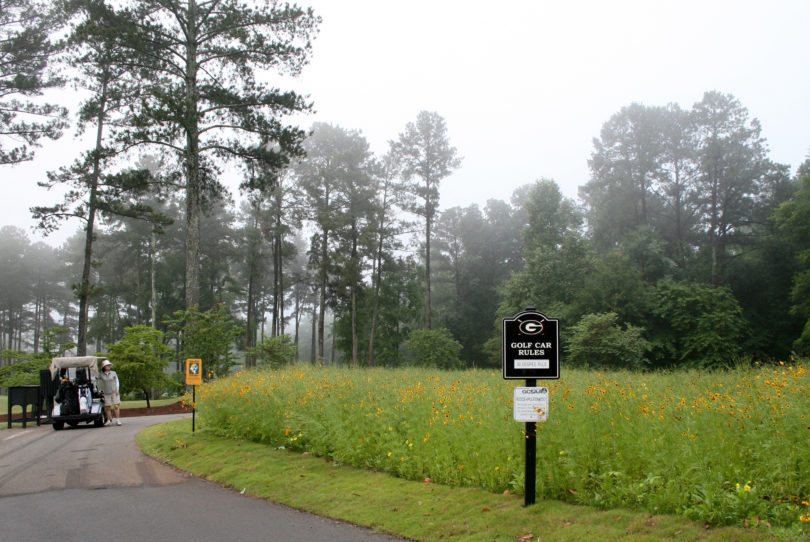 An early morning golfer stops to inspect the pollinator habitat at the University of Georgia Golf Course. This patch near the course's first hole is filled with a mix of wildflowers that will bloom from March to September. It's the first of seven to eight acres of pollinator habitat slated for the golf course. (Credit: Merritt Melancon/UGA)

Athens, Ga. – Golf courses are some of the most heavily managed urban landscapes, but that doesn’t mean they don’t have room for wildlife. At the University of Georgia, course superintendent Scott Griffith is making sure pollinators have the flowers and space they need to thrive.

More and more, golf courses are including lightly managed spaces interspersed with the perfectly tended greens to provide refuge for birds and insect pollinators.

For Griffith, that means he’s making sure that his golf course is maintained using as few pesticides and as little irrigation water as possible. This spring, he also installed the first of what will soon be seven or eight acres of prime pollinator habitats spread among the 18 holes of the UGA Golf Course, located off South Milledge Avenue in Athens.

The plots not only provide important habitats for pollinators; they prove the point that a landscape can be managed and still coexist with wildlife, he said.

Griffith hopes the course will serve as an educational tool—that golfers would be able to incorporate pollinator protection practices into their own landscapes and that other golf courses would start to think about where they can reserve habitats for wildlife.

Loss of natural habitat is a major factor contributing to the loss of bee and pollinator populations across the U.S. Creating even small pollinator habitats throughout the urban landscape is one way to support their comeback.

“Reestablishing pollinator habitat in any fashion in urban areas is critical for our native bumble bees,” said Keith Fielder, a UGA Extension coordinator in Putnam County and former president of the Georgia Bee Keepers Association. “These insects are key pollinators for backyard gardens and native plant species in fragmented urban environments.”

Creating pollinator habitat isn’t hard, Griffith said, but there’s more to it than just refraining from using pesticides in certain areas of the course.

“When we plan these areas out, we want to make sure that they’re in a place where we have access to irrigation for establishment—which we don’t need this year but may in the future—a place where there is enough sunlight to sustain the flowers and a place where there isn’t a lot of play through so people don’t lose their golf balls,” he said.

Griffith seeded the first pollinator plot this March. Many of the flowers were at hip height when the Georgia Golf Course Superintendents Association toured the course in early June.

The transition of the first patch from bermudagrass to wildflower meadow was fairly painless, Griffith said. His crew first tilled under the grass and used a quick-acting herbicide to ensure the grass wouldn’t come back and choke the young flowers. When the herbicide had broken down into the soil, they planted a specially blended wildflower seed mix created by the Applewood Seed Company. The company recommends using seven to 14 pounds of seed per acre to achieve a thick carpet of flowers.

The flowers should continue to produce blooms from May until September year after year.