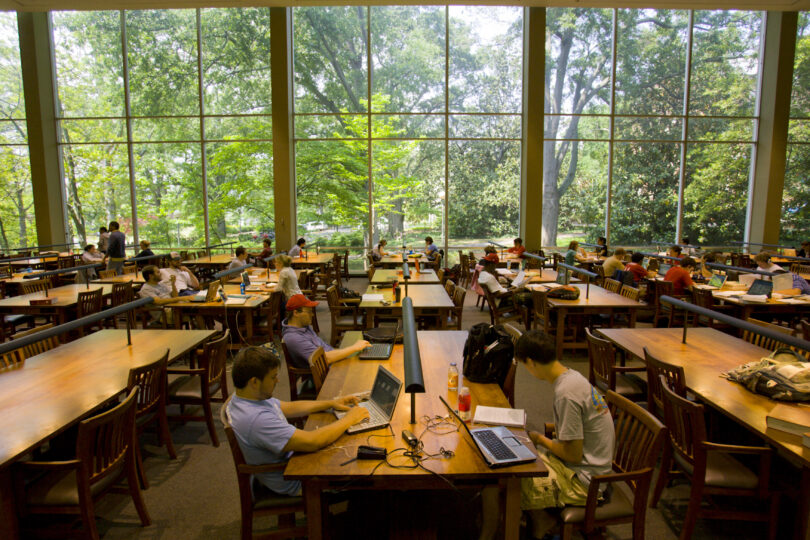 Students studying in the Law Library have a full view of North Campus. (UGA file photo)

Several graduate programs at the University of Georgia have earned top 10 rankings in the 2023 edition of the U.S. News & World Report Best Graduate Schools.

The Best Graduate Schools rankings, which were published March 29, evaluate schools and programs across the country in a variety of graduate disciplines.

“The University of Georgia is committed to preparing its graduate students for a wide range of competitive fields,” said Ron Walcott, vice provost for graduate education and dean of the Graduate School. “Our highly ranked graduate programs reflect the quality and commitment of our faculty, as well as the success of our students after graduation.”

The School of Public and International Affairs moved up six spots, from ninth to third overall, and had several graduate specialties among the nation’s top five. SPIA’s programs ranked third in both public finance and budgeting and public management and leadership, and fourth in local government management.

The higher education administration program in UGA’s Louise McBee Institute of Higher Education ranked 10th in the nation, continuing a run of top 10 rankings dating back to 2007.

The School of Law ranked 29th in the nation and 11th among public university law schools. Its programs in international law and trial advocacy ranked 21st among the nation’s public law schools.

In addition, the agricultural engineering program in the College of Engineering ranked 18th in the nation. Graduate programs in civil, computer, electrical and environmental engineering continue to climb in national rankings.

The full-time MBA program in the Terry College of Business ranked 38th in the nation and had a 92% postgraduation employment rate three months after graduation. The part-time MBA is ranked 30th.

In addition, the School of Social Work ranked 28th in the nation.

“With outstanding programs and new initiatives like GradFIRST, the University of Georgia is making significant investments in graduate education that will benefit students for years to come,” said S. Jack Hu, senior vice president for academic affairs and provost.