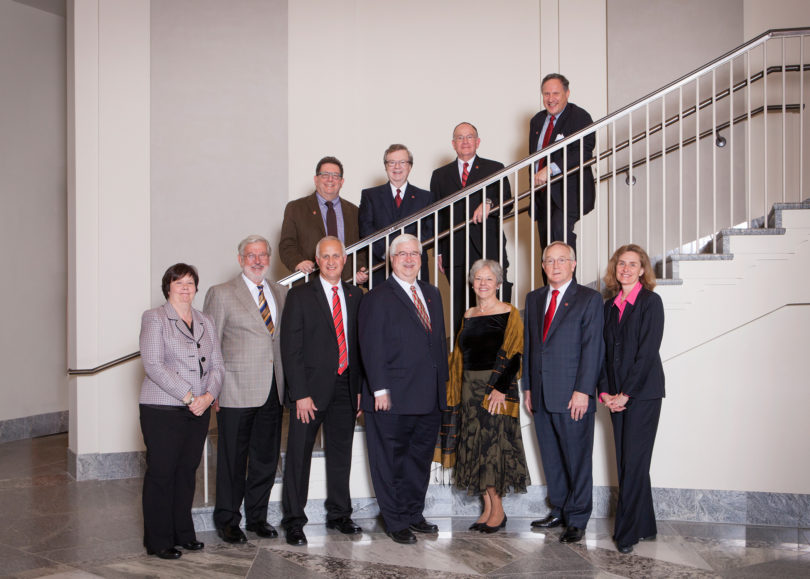 The UGA Graduate School has honored 10 graduates with the 2014 Alumni of Distinction Award for achieving exceptional success in their professional careers and in service to their communities. Pictured are (from left): Julie Coffield

Athens, Ga. – The University of Georgia Graduate School has honored 10 graduates with the 2014 Alumni of Distinction Award for achieving exceptional success in their professional careers and in service to their communities. The awards were presented Oct. 16.

Recipients have achieved success in their careers and their communities, serve as mentors and role models in their profession, and have made substantive contributions to their fields at the regional and national levels. The professional achievements and contributions to society made by these graduate alumni exemplify the UGA mission, “to teach, to serve, and to inquire into the nature of things.” The recipients of the 2014 awards are:

Richard F. Arrendale, of Atlanta, Georgia, directs the Emory Institute for Drug Development Bioanalytical Chemistry, Drug Metabolism and Pharmacokinetics Group. Arrendale has played a lead role in the preclinical and early clinical development of new treatments for tumors in tobacco users. Additionally, he co-chaired the 2012 UGA Symposium on Pharmaceutical Development.

Phillip J. Brantley, of Baton Rouge, Louisiana, is the associate executive director for scientific education at Louisiana State University’s Pennington Biomedical Research Center. More than 30 years of research grants, mostly from the National Institutes of Health, have funded his research in weight loss and long-term weight management. Brantley is a member of the executive council of the Obesity Society and has served on the executive boards of the Louisiana Psychological Association and the Society of Behavioral Medicine.

Perry W. Buffington, of Orlando, Florida, is a bestselling author, speaker, media personality and licensed applied psychologist. He teaches clinical psychopharmacology in UGA’s Franklin College of Arts and Sciences’ program on the Griffin campus and was awarded the Teaching Excellence Award by the UGA psychology department in 2014. In addition to lecturing worldwide on ways to reduce drug errors, he is also a former contributing editor to Delta Air Lines’ in-flight magazine, Sky.

Christopher Francis D’Elia, of Baton Rouge, Louisiana, is the dean of the School of the Coast and Environment at Louisiana State University. His research is centered on the nutrient dynamics of estuaries and coral reefs. D’Elia is a fellow of the American Association for the Advancement of Science, has served on numerous advisory panels to the National Science Foundation, and previously directed the International Ocean Institute-USA and the Center for Science and Policy Applications for the Coastal Environment.

Michael Feuerstein, of Gaithersburg, Maryland, is a professor of medical and clinical psychology and preventative medicine/biometrics at the Uniformed Services University of the Health Sciences. In 1994, he developed and directed a clinical psychology Ph.D. program for the Department of Defense to train clinical providers and military leaders in behavioral health and medicine. A brain cancer survivor, Feurstein has dedicated his career to improving the health, health care, function and well being of cancer survivors.

Pamela Flattau, of Washington, D.C., has served as a senior staff officer and task leader in Washington, D.C. for 40 years with the National Research Council, National Science Foundation, and Institute for Defense Analyses’ Science and Technology Policy Institute. This year, she launched the nonprofit business venture, The PsySiP Project, to advance behavioral measures associated with sustainable consumption for integration into the U.S. System of National Accounts for the U.N.’s post-2015 Sustainable Development Agenda.

Kurt C. Lawrence, of Athens, Georgia, is a supervisory research agricultural engineer and research leader of the quality and safety assessment research unit within the agricultural research service division of the U.S. Department of Agriculture. He is recognized internationally as an expert in radio-frequency moisture sensing in cereal grains, crack detection in shell eggs, and imaging systems used to detect poultry contamination. Lawrence is a “triple dawg,” having received his bachelor’s, masters and doctorate all from UGA.

Roland McElroy, of Falls Church, Virginia, is president of McElroy & Associates, a public relations firm focused on providing strategic advice for corporate and public policy clients. In Washington, D.C. he served U.S. Sen. Sam Nunn for 15 years, first as press secretary and later as chief-of-staff. In 2001, he wrote a history of the Blue Cross/Blue Shield of Georgia, entitled “Georgia Blue.” His next project, a political memoir of his time with Nunn, is due to be released in 2015.

Kathleen Slevin, of Williamsburg, Virginia, is the former vice provost for academic affairs and Chancellor Professor of Sociology at the College of William and Mary. Her scholarship centered on age and gender inequalities. In 1990, she was appointed by the Governor of Virginia to serve on the Affirmative Action Monitoring and Advisor Committee. She currently serves as the president of the Southern Sociological Society and is the faculty advisor for the National Society of Collegiate Scholars.

Deborah Williams, of Stamford, Connecticut, is the president and CEO of the apparel and event productions company, Her Game 2. Through an exclusive merchandise licensing agreement with the National Basketball Association, she supplies apparel for NBA fans across the country. She is also the Founder of Behind the Bench: The National Basketball Wives Association. She was selected as one of the 25 Most Influential African American Women in Business by The Network Journal and was crowned Mrs. USA in 1990.

The Graduate School Alumni of Distinction Award was established in 2012 by UGA’s Graduate Education Advancement Board; the first recipients were named in 2013. All graduate-level UGA alumni are eligible to be considered for the annual award.