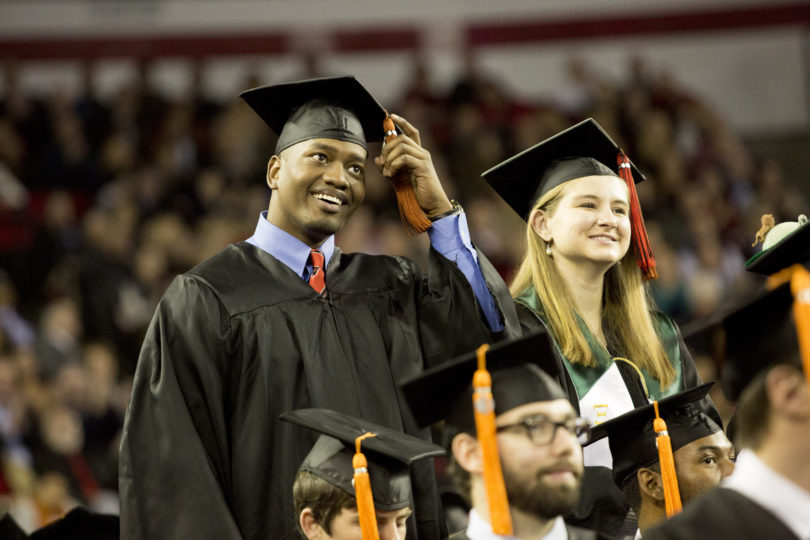 Measures of student success at the University of Georgia are at all-time highs, and ongoing enhancements to the learning environment aim to lift retention and graduation rates to even higher levels in the coming years.

“There is no commitment more important at the University of Georgia than our commitment to student learning and success,” said UGA President Jere W. Morehead. “I want to congratulate our outstanding faculty, staff and students. These impressive metrics ultimately reflect their hard work and dedication to academic excellence.”

Eighty-five percent of UGA students graduate within six years. For comparison, the average six-year graduation rates for aspirational, peer and SEC institutions are 87, 75 and 71 percent, respectively.

The university has made fostering student success-both during their time on campus and after graduation-a key priority. Last year UGA became the nation’s largest public university to ensure that each of its students engages in hands-on learning such as internships, research, study abroad and service-learning. These high-impact learning practices are linked to higher levels of engagement, deeper learning and higher levels of success in graduate school and in the workplace. Last year the university also completed a small class size hiring initiative that recruited 56 new faculty members and has markedly increased pass rates in challenging courses where students benefit from greater faculty interaction.

Students at UGA also receive a higher level of personalized support thanks to the addition of 35 academic advisors since 2015. At the university’s Exploratory Center, which opened last fall, specially trained advisors help students find a major that aligns with their unique talents and aspirations. In addition, new digital tools help improve communication between students and advisors and proactively highlight issues that might impede a student’s progress toward graduation.

To build on these successes for the benefit of students, Morehead recently announced the Investing in Student Success Initiative to recruit 10 tenure-track faculty members, 10 lecturers and six academic advisors to support students in fields with rapid enrollment growth.

This fall the university also launched an ambitious program that gives students the opportunity to earn both a bachelor’s degree and a master’s degree in five years or less. Through the Double Dawgs program, students accelerate their progress toward a master’s degree by taking rigorous, graduate-level coursework during the final year of their undergraduate studies. Faculty members have established more than 115 Double Dawgs linked-degree programs, and additional programs are currently in development.

“The University of Georgia has differentiated itself as an institution that embraces bold and ambitious initiatives,” said Senior Vice President for Academic Affairs and Provost Pamela Whitten. “We’re creating an unrivaled learning environment, and students from across the state and around the world have responded by applying for admission in record numbers.”

We are constantly looking for ways to further expand success for our students — both while they are at UGA and for their futures beyond the university. — Vice President for Instruction Rahul Shrivastav

Other academic initiatives that are helping students earn their degrees in a more timely manner include an expansion of online course offerings in the summer to enable students to earn course credits while away from campus on internships, studying abroad or spending time with family. A record 16,447 students took summer courses in 2017, and 28 percent of those enrollments were online.

Programs such as the recently restructured Freshman College Summer Experience help ensure a smooth transition from high school to the university, and predictive analytics help the university’s Division of Academic Enhancement proactively reach out to students who could benefit from resources such as tutoring and academic counseling.

In addition to positioning students for success on campus and after graduation, academic initiatives such as these have garnered national recognition for the university. UGA recently achieved its highest U.S. News & World Report ranking-16th among public universities-and Kiplinger’s ranks UGA among the nation’s top 10 values in public higher education. The university also boasts a 95 percent career outcomes rate, which exceeds the national average by 13 percentage points.

“We are constantly looking for ways to further expand success for our students-both while they are at UGA and for their futures beyond the university,” said Vice President for Instruction Rahul Shrivastav. “Ultimately, our goal is to help develop them as lifelong learners who will go out and make a global impact.”