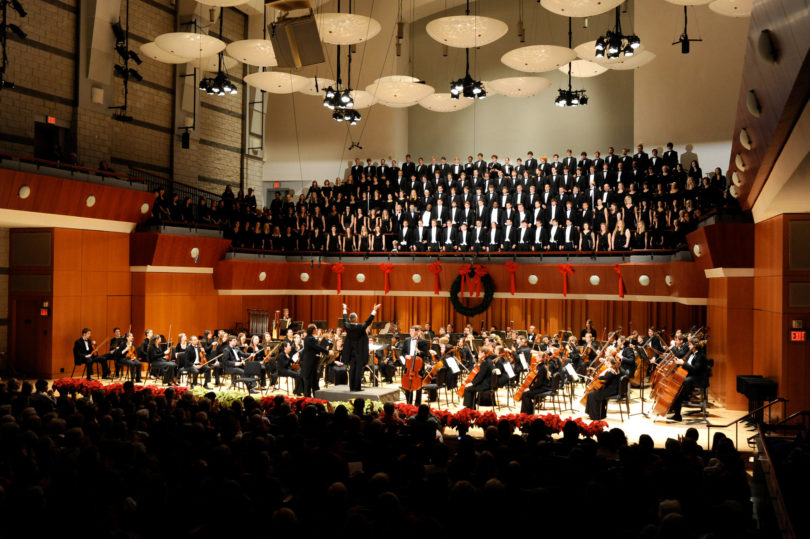 The University of Georgia Holiday Concerts are a cherished tradition of the Athens community. "The joyful choral and orchestral music we bring to the halls each year—much of it known and familiar—rekindles the cheer and goodwill we all feel around the holidays

An Athens holiday tradition continues with the UGA Holiday Concerts, held this year at 7:30 p.m. on Dec. 3-4 in Hugh Hodgson Concert Hall at the Performing Arts Center.

The UGA Symphony Orchestra, directed by Mark Cedel, and the combined choirs of the Hugh Hodgson School of Music will perform John Rutter’s “Gloria,” the first suite of Robert Shaw’s “Many Moods of Christmas,” excerpts from Bach’s “Magnificat” and other seasonal favorites.

The UGA British Brass Band also will join the action, performing several holiday classics and playing famous yuletide songs in a sing-along section of the performance, with concert-goers providing the vocals.

Tickets are $18 each or $5 with a UGA student ID and are available at the Performing Arts Center box office, by calling 706-542-4400 or by visiting pac.uga.edu.

Conducting duties will rotate between several School of Music faculty and one graduate student: Dan Bara and J.D. Burnett, the director and associate director of choral activities, respectively; Claudine Gamache, a doctoral conducting student; and Phil Smith, a professor of trumpet.

The UGA Holiday Concerts are presented as the last of 2015’s Second Thursday Scholarship Series events. The series returns in 2016 with performances from two groups with School of Music faculty members, Mod(ular) Ensemble and Revien Trio, on Feb. 18.

The Second Thursday Scholarship Series began in 1980 and continues the tradition of “Music Appreciation Programs” started by Hugh Hodgson in the 1930s.

Proceeds from contributions and ticket sales to these concerts are among the primary means through which School of Music scholarship funds are raised each year.