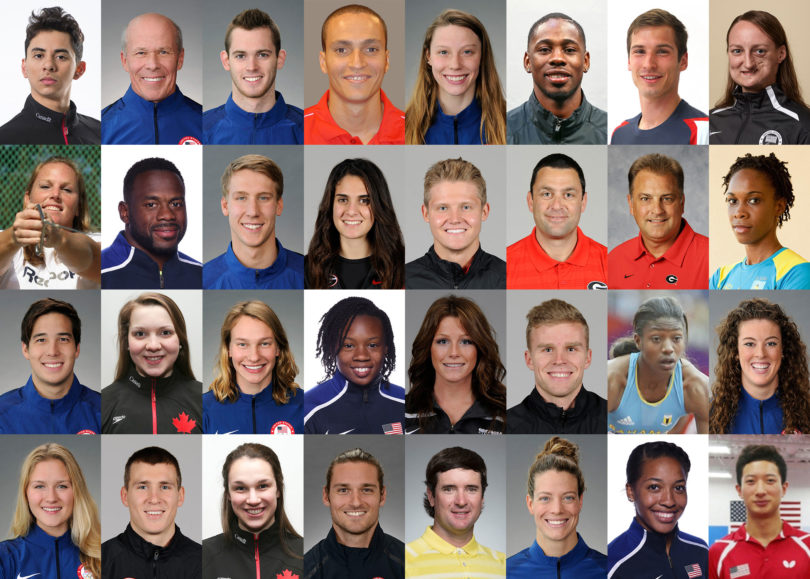 Athletes and coaches representing UGA's red and black are competing for gold in the 2016 Olympic and Paralympic games in Rio de Janeiro.

48 in Brazil for summer Olympics, Paralympics

Athletes and coaches representing UGA’s red and black are competing for gold in the 2016 Olympic and Paralympic games in Rio de Janeiro. Other students have found once-in-a-lifetime experiential learning opportunities through the international competitions.

Twenty-eight current, former and incoming student-athletes as well as four coaches are representing the U.S. and nine other nations in the Olympic and Paralympic games, adding to the rich history of Bulldog Olympic athletes.

“We are excited that so many of our current and former student-athletes, as well as our coaches, are participating in the 2016 Games,” said UGA President Jere W. Morehead. “The Bulldog Nation will be watching and cheering with pride as these outstanding individuals compete in Rio.”

Among those representing the U.S. track team is Keturah Orji, a junior financial planning major, who is already a three-time NCAA champion in the triple jump as a Bulldog.

Orji said she is excited about the challenges that she and her teammates will face.

She is thrilled to be in Rio with plenty of fellow Bulldogs, including her roommate Kendell Williams, a senior advertising major who is competing in the heptathlon for Team USA.

“It’s good to have familiar faces overseas,” said Williams, a five-time NCAA pentathlon and heptathlon champion. “We’re going to support each other and cheer each other on. It’s nice to see so many Bulldogs.”

Incoming student Yijun Feng will compete on the U.S. table tennis team, while alumnus Bubba Watson will represent the U.S. in golf, and current student Brittany Rogers will suit up for Canada in gymnastics.

In the Paralympics, former student Jarryd Wallace qualified for the U.S. track team, and alumna Lindsay Grogan earned a spot on the U.S. swim team.

In addition to participation from student-athletes and coaches, UGA faculty, staff and students are in Rio to work on other aspects of the Olympic and Paralympic games.

Becca Leopkey, an assistant professor of sport management in the College of Education, is serving on the International Olympic Committee’s Sustainability and Legacy Commission, in part because of her research on the legacy of sporting events.

Mike Mobley, an associate director of sports communications, will work with Olympic Broadcast Services at the team handball venue.

Students from UGA’s Grady College of Journalism and Mass Communication are getting valuable experiential learning opportunities in Rio.

Nicole Chrzanowski and Jaylon Thompson, two students in Grady College’s sports media certificate program, were selected by the U.S. Olympic Committee to report on the games for USOC’s various information channels, including its TeamUSA.org website.

The Olympic Games will end Aug. 21.