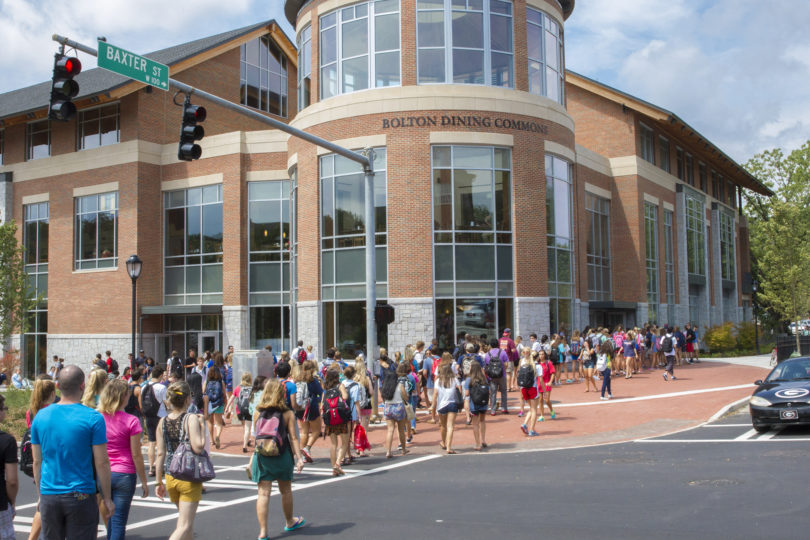 Incoming University of Georgia students have set a new record for academic quality, with the highest GPA and SAT scores in the university’s 230-year history.

“We are pleased that the University of Georgia once again has enrolled a record-setting class of first-year students,” UGA President Jere W. Morehead said. “These students are attracted to UGA’s world-class learning environment with bold new initiatives to expand experiential learning and to reduce class sizes. This year’s incoming class is another sign that UGA is reaching new heights of academic excellence.”

UGA received more than 22,000 applications (a 4 percent increase over last year) for fall 2015 admission, with an admittance rate of 52 percent of all applicants. Since 2010, the number of freshman applications has increased by 25 percent. Around 1,550 transfer students also will begin classes this fall.

A breakdown of the numbers indicates that the mid-50 percentile GPA range for the class of 2019 is 3.81-4.06. Additionally, this class has a combined mean critical reading and math score of 1301 plus an average writing score of 626, for a total of 1927 on the 2400 scale-14 points higher than last year’s incoming class. This year’s mean score for students who took the ACT was 29, matching last year’s record.

The Honors Program will enroll 525 new students in the first-year class who have earned an average high school GPA of 4.07, a strong indication of their rigorous Advanced Placement or International Baccalaureate curriculum. Incoming Honors students have an average SAT score of 1469 and an average ACT score of 33.

The rigor of students’ high school curriculum continues to be a key factor in admissions decisions, with some 94 percent of the students having enrolled in College Board Advanced Placement or International Baccalaureate classes while in high school. Many students earned enough credits to be classified as sophomores and several as juniors during their first term of enrollment. The average number of AP and IB courses taken by students was six. Sixteen percent of students dually enrolled in college while attending high school, up 3 percent from 2014. The top preferred majors are biology, business, finance, marketing, psychology, biological science, biochemistry/molecular biology and computer science.

“UGA’s future is bright,” said Patrick Winter, associate vice president for admissions and enrollment management. “The incoming class represents some of the top scholars, leaders, innovators and artists from across Georgia, the nation and the world. They have achieved at an incredibly high level already, and I am looking forward to welcoming them to campus. I can’t wait to see what they are going to accomplish at UGA.”

In addition to being the most academically qualified, the 2015 freshman class also is one of the most diverse in UGA history, with more than 30 percent of the entering freshmen self-identifying as other than Caucasian. Eight percent have self-identified as African-American and 6 percent as Hispanic.

Approximately 86 percent of the first-year class hails from 443 high schools and 133 counties across Georgia. Almost 13 percent of the class comes from other states and countries. Of the 43 states represented, the largest number of students outside of Georgia are from North Carolina, Texas, Florida, Virginia, Maryland, Tennessee, New Jersey, South Carolina, New York and Pennsylvania.

More than 200 of this year’s incoming students are ranked as first or second in their high school graduating class.