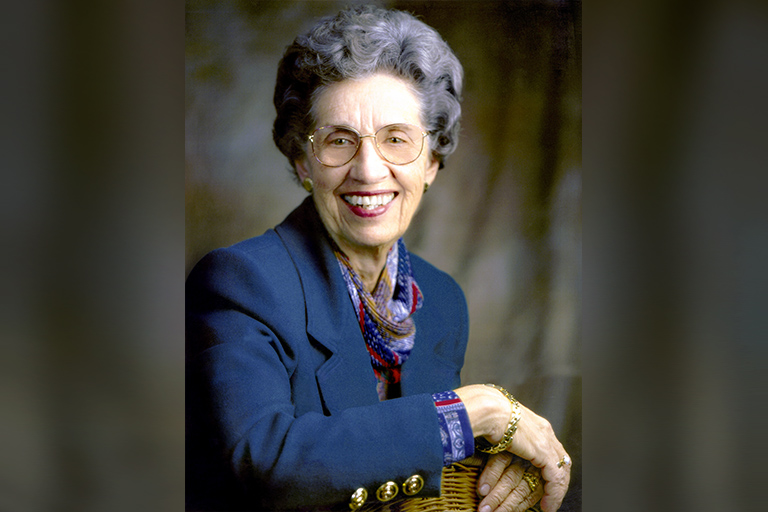 The late UGA administrator and state legislator left UGA a gift of over $3.5 million

Following a transformational gift of over $3.5 million from the estate of M. Louise McBee, the University of Georgia paid tribute to the former administrator and state legislator with the naming of the Louise McBee Institute of Higher Education (IHE). The President’s Cabinet approved the naming in its Sept. 29 meeting, introduced by petition from the institute.

“Dr. McBee’s extraordinary legacy of leadership and service to UGA and the state of Georgia is one that will be remembered for generations to come,” said UGA President Jere W. Morehead. “For her many contributions to this institution and to public higher education, we are pleased to recognize her and link her with the institute she cared so much about.”

McBee’s estate gift, received this summer, is the greatest single donation to the institute in its nearly 60-year history. McBee, who passed away in March, was a consistently ardent supporter and the IHE’s largest cumulative individual donor.

“Having the opportunity to work for and with Louise McBee was among the highlights of my time at UGA. Knowing her love of, and service to, the University of Georgia and the Institute of Higher Education makes this naming a most appropriate tribute to both the person and her career,” said Peter J. Shedd, University Professor Emeritus of Legal Studies, who serves as co-executor of the estate along with his wife, Margie Shedd.

“Dr. McBee represented excellence in all of her pursuits. We are humbled and inspired by her confidence in our mission and activities,” said Libby V. Morris, director of the institute. “In her multiple roles at UGA, she was keenly aware of the importance of student development within and beyond the classroom. Thus, we will establish the McBee Scholars program to recognize outstanding graduate students who show potential for leadership in higher education.”

Through positions in the Athens community, at UGA and in the Georgia General Assembly, she championed education in Georgia for over 55 years.

“She embodied leadership with vision, action and inclusive results,” said Morris. “Across her career, she was widely regarded as one of the most effective leaders and influential women in Georgia politics and higher education. She led with integrity and challenged all whom she met to make a difference and give back.”

McBee retired from UGA in 1988 and three years later won a seat in the Georgia House of Representatives. She served in the legislature for 13 years, including an influential term as chair of the House Higher Education Committee.

Over the years, her outstanding service to education was recognized with significant honors. In 1988, she received the Abraham Baldwin Award from the University of Georgia Alumni Association for distinguished service to the university. The University System of Georgia Board of Regents bestowed the Elridge McMillan Lifetime Achievement Award on McBee in 2006. In 2014, President Morehead presented McBee with the inaugural President’s Medal for her lifelong contributions to UGA, and in 2018 he placed her portrait in the Administration Building in honor of her extraordinary service.

“We are born obligated to pour back into the stream that nourished us—to replenish it for others,” McBee once said. “To the extent that we do that, we have lived a good and full life.”

The Louise McBee Institute of Higher Education is an academic unit committed to advancing higher education policy, management and leadership through research, graduate education and outreach. Since its creation in 1964, the IHE has expanded to support two doctoral programs, a master’s degree and three innovative outreach initiatives.

Public service has been an integral part of the institute’s mission since its inception. The first program, Faculty Development in Georgia, has enabled more than 250 faculty members from other colleges and universities in Georgia to earn a doctoral degree at UGA. Since 1995, the Governor’s Teaching Fellows has served more than 650 fellows from over 70 campuses across the state with expanded opportunities to develop leading-edge teaching and technology skills.

The Georgia College Advising Corps works in underserved high schools throughout Georgia to increase the number of low-income, first-generation and underrepresented students who enroll in and complete higher education. Starting with just four advisers in four locations in 2009, the program currently serves more than 4,000 high school seniors in 17 Georgia schools and is entirely supported by private funds.