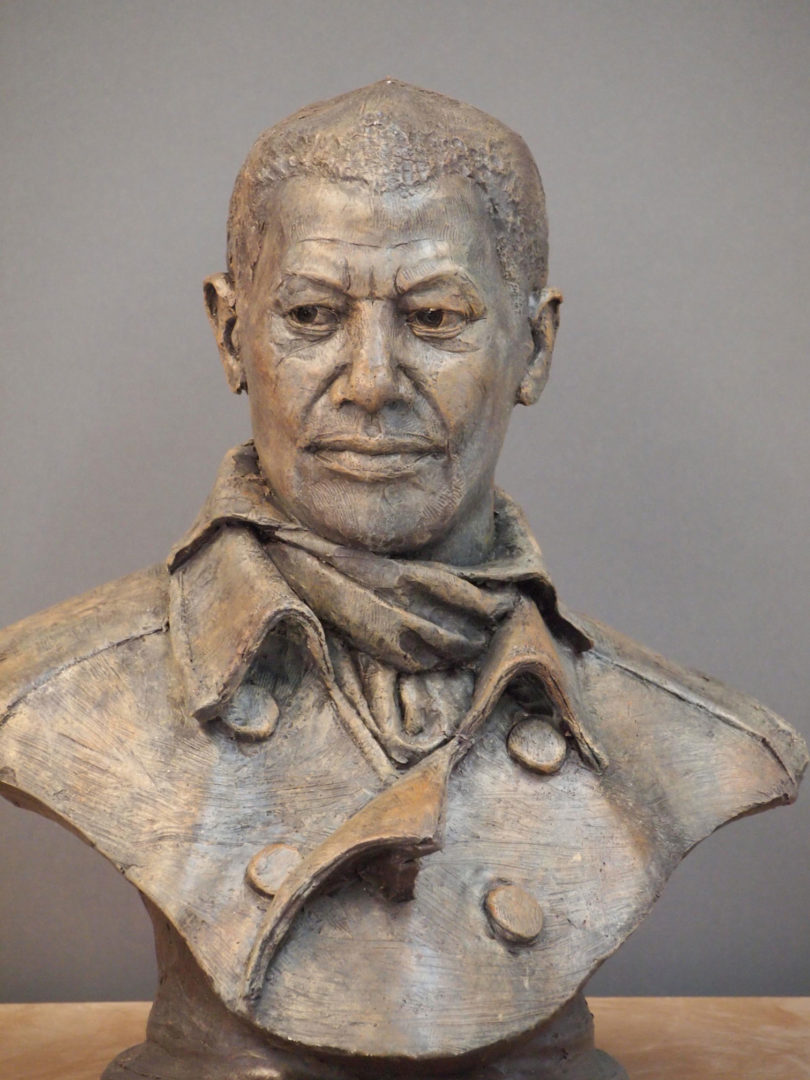 Athens, Ga. – The city of Washington, Ga., will unveil a new monument featuring a sculpture by University of Georgia instructor Kinzey Branham that honors American patriots who fought in the Revolutionary War—including African Americans and Native Americans—on Aug. 11 at 10 a.m. on the square in downtown Washington.

Branham created a three-piece granite and bronze monument with the bust of American spy James Armistead Lafayette as its centerpiece. The monument also will tell the story of Wilkes County slave Austin Dabney and honor the estimated 5,000 to 8,000 African-American soldiers who served in the Revolutionary War.

“My family has been in Wilkes County since the late 1700s, so being involved with this monument on the square in Washington has added meaning for me,” said Branham, who found the image of Lafayette to use for the bust. “Using that picture, I was actually able to put a face on all those black slaves who served, and it was his face.”

Wilkes County was the site of the Battle of Kettle Creek on Feb. 14, 1779, when militia forces led by Col. Andrew Pickens of South Carolina attacked an expedition of British Loyalists. While not a major event in the overall war, the victory served to boost patriot morale and prolong the British effort to gain control of the Georgia backcountry, becoming one of the most important revolutionary war battles to be fought in Georgia.

While accurate numbers for percentages and participation of all populations in the colonial armies are elusive, African Americans and Native Americans were regularly conscripted to serve in the patriot army and militias. Dabney, who fought against the British, was the only African American to be granted land by the state of Georgia in recognition of his bravery and service. Lafayette was the first African-American spy, who joined the army under Gen. Marquis de Lafayette and posed as a runaway slave to supply information on British troop movement and arms.

“Kettle Creek was a pivotal battle in Georgia; and one year later, the city was named for George Washington in honor of the victory and with some added spite for the British,” said David Jenkins, economic development director for the city of Washington, who added that Wilkes County is in the process of developing a master plan for the Kettle Creek battle site. “This new monument is an important civic expression for us, recognizing the experience of many Georgians as well as that of men who were not recognized at the time but nonetheless played very important roles in our history.”

Branham earned his bachelor’s degree in sculpture in 1979 from the UGA Lamar Dodd School of Art in the Franklin College of Arts and Sciences and his master’s degree from Louisiana State University. He has worked as an adjunct professor of sculpture in the school of art since 2006.

“Artwork in the community is a very tangible way to keep our civic virtues front and center,” said Gene Wright, interim director of the school of art. “The monument in Washington is a great example of public art becoming a part of the history of a community, and we’re honored to have one of our former students and current faculty play such an important role in it.”

For more information on the Lamar Dodd School of Art, see http://art.uga.edu.