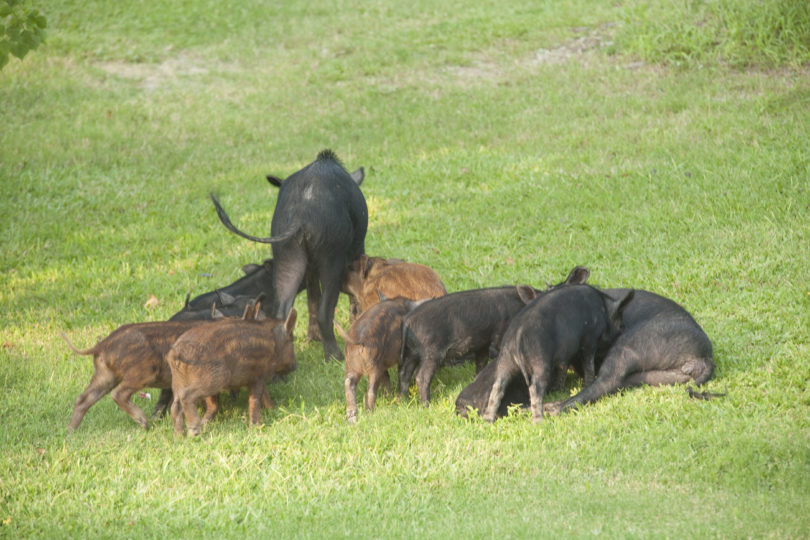 Baby feral pigs invade the Palmetto State Park's campgrounds in Louisiana, causing a health hazard and major annoyance, in addition to ruining the campground. The pigs have no natural predator and are causing massive habitat loss to other species in the eco system. (Submitted photo)

Pilot project, one of 20 across the country, provides resources to Southwest Georgia

The University of Georgia is a key partner in a new federal initiative to combat feral hogs and will partner with federal and state agencies as part of a $1.5 million, three-year project in Southwest Georgia.

The Feral Swine Eradication and Control Pilot Program, established as part of the 2018 Farm Bill, allocates $75 million to targeted areas across the United States where feral swine have been identified as a threat. In Georgia, the animals cause more than $150 million in damage each year to agriculture and natural areas. 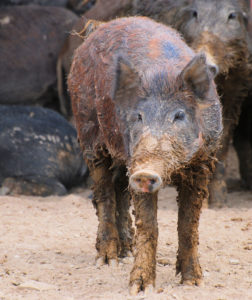 Feral swine are not native to the U.S. They are the result of recent and historical (1500s Spanish explorers) releases of domestic swine and Eurasian boar. (Photo by Laurie Paulik)

“This project will evaluate the effectiveness of corral trapping, teach landowners to successfully implement their own trapping program and monitor ecosystem recovery after feral swine removal,” said Michael T. Mengak, professor and wildlife specialist at the UGA Warnell School of Forestry and Natural Resources. Warnell received a subaward of the grant awarded to the Flint River Soil and Water Conservation District.

In Georgia, the pilot project includes parts of Calhoun, Baker, Terrell and Dougherty counties and will have three components: removing feral swine by the U.S. Department of Agriculture’s Animal and Plant Health and Inspection Service, restoration efforts through the USDA’s Natural Resources Conservation Service and direct assistance to landowners through partner agencies.

As part of the effort, Mengak and researchers with the Jones Center at Ichauway in Newton, Georgia, will provide assistance with surveying populations, data analysis, water quality monitoring, outreach and education workshops, crop damage surveys and native species recovery following feral swine removal. Each of these aspects will be critical in understanding the long-term success of the project.

The Southwest region of Georgia is significant in terms of both agriculture and natural habitat. The counties in the pilot program are more than 50% agricultural, producing more than $2 billion in goods each year. The area also includes the Chickasawhatchee Wildlife Management Area, managed by the Georgia Department of Natural Resources, and overall is an important habitat area for bobwhite quail, gopher tortoise and four species of threatened or endangered aquatic mussels.

But, unfortunately, it’s also a growing refuge for feral swine.

“Feral swine can cause significant damage to crops and grazing lands, while also impacting the health of our natural resources,” said Terrance O. Rudolph, state conservationist for the USDA’s Natural Resources Conservation Service. “By collaborating with our partners nationally and here in Georgia, our hope is to control this invasive species—improving operations for farmers while also protecting our natural resources for the future.”

The project represents a collaboration of partners from across the state and UGA. In addition to the assistance provided by Warnell researchers, the project includes professionals from the Jones Ecological Research Center at Ichauway, the UGA Tifton Veterinary Diagnostics and Investigational Laboratory, Georgia Department of Natural Resources, Georgia Farm Bureau, Georgia Department of Agriculture and Tall Timbers.

This project is one of 20 across the United states, according to priorities set by the USDA that consider feral swine populations, cropland acreage, watersheds, nearby wildlife management areas and existing partnerships.