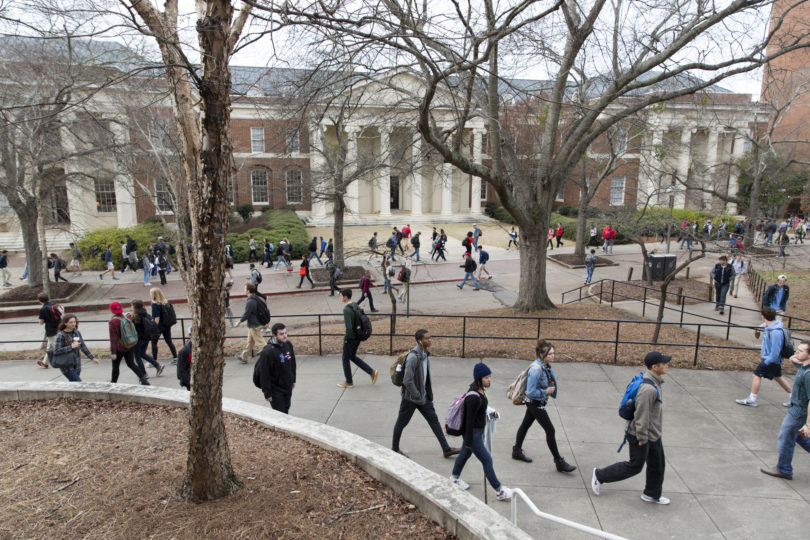 Students outside of Brooks Hall, which houses the Department of Statistics. (Photo by Andrew Davis Tucker)

A new degree program from the University of Georgia Franklin College of Arts and Sciences will train undergraduates at the interface of statistics and computer science to meet the rapidly growing demand for data scientists.

“The new undergraduate data science degree will help fill this void by preparing students for jobs in a variety of fields, from technology companies like Google, Amazon, IBM, Intel and Samsung, to finance and insurance firms like Goldman Sachs, AIG, Liberty Mutual, as well as across a variety of other sectors, from Coca-Cola and UPS, to Delta Airlines, Home Depot, Boeing, and Johnson & Johnson, and government agencies like NASA, the Department of Defense, and the National Institute of Standards and Technology,” said T.N. Sriram, professor and head of the department of statistics.

The Bachelor of Science degree in data science will teach students how to use their knowledge of statistical and computing principles to analyze and solve real-world data analysis problems. The major is suitable for students interested in careers in industry or in pursuing more specialized graduate study.

The degree was approved by the Board of Regents at its September 2018 meeting and makes UGA the only campus in the University System of Georgia to offer an undergraduate major in data science. The new program will begin with its first cohort of undergraduates in the fall semester of 2019.

“A data scientist will need to be able to manage the full lifecycle of data, which requires knowledge and skills from both computer science and statistics,” said Sriram.

“Faculty members in computer science and statistics have spent more than a year envisioning, planning and designing the new degree,” said professor Thiab Taha, head of the department of computer science. “This new interdisciplinary major will uniquely position UGA to become a leader in training and mentoring future generations of data scientists.”