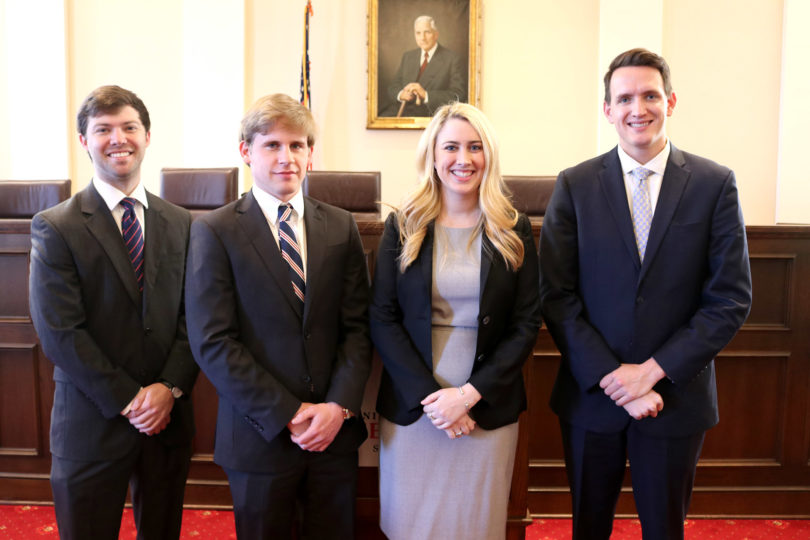 In addition to being undefeated throughout the competition, the group was presented with the Outstanding Trial Brief Award, and Stokes was named the Most Professional Advocate.

Georgia Law Director of Advocacy Kellie Casey praised the team for its efforts. “It is great to win this national mock trial tournament,” she said. “We faced law school teams from the states of Alabama, California, Florida, North Carolina, South Dakota and Texas as well as Washington, D.C. I am also grateful to current Georgia Law faculty member and former advocacy student J. Robert ‘Rob’ McNiff and Georgia Law graduates Michael T. ‘Mike’ Rafi, Margaret E. ‘Maggy’ Randels, Adam J. Fitzsimmons, David B. Dove and Eric L. Roden for their help in readying our students for competition. At the end of the day, it is all about preparing our students to be successful, and it is tremendous to have so many graduates and former advocacy program participants investing in the next generation of legal advocates.”

The last time Georgia Law won this tournament was in 2014.

UGA School of Law
Consistently regarded as one of the nation’s top public law schools, Georgia Law was established in 1859. Its accomplished faculty includes authors of some of the country’s leading legal scholarship. The school offers three degrees-the Juris Doctor, the Master of Laws and the Master in the Study of Law-and is home to the Dean Rusk International Law Center. Georgia Law is proud of its long-standing commitment to providing first-rate legal training for future leaders who will serve state and nation in both the public and private sectors. For more information, see www.law.uga.edu.