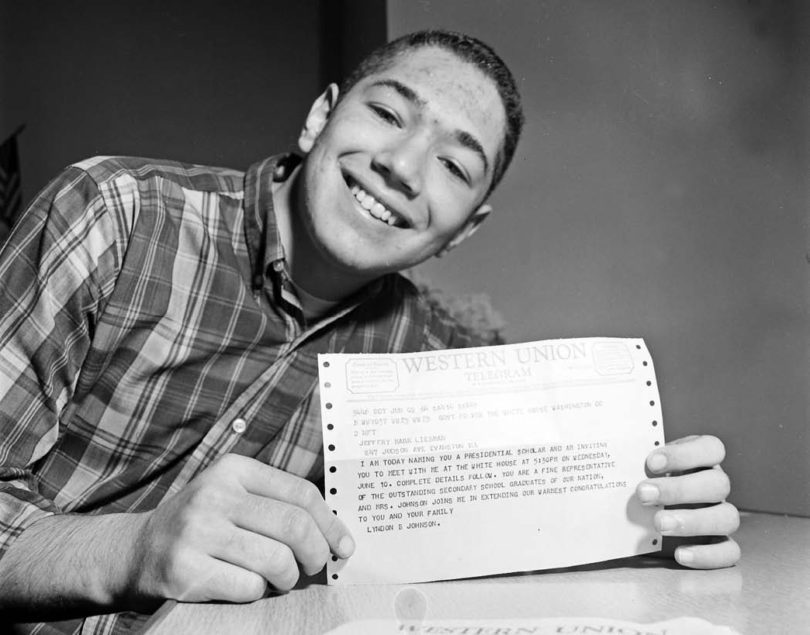 Athens, Ga. – The University of Georgia Libraries is now the repository of materials relating to the U.S. Presidential Scholars, an addition that will complement collections relating to gifted education.

The U.S. Presidential Scholars program was established in 1964 by President Lyndon Johnson to honor some of the nation’s most distinguished graduating high school seniors. In 1979, the program was extended to recognize students who demonstrate exceptional talent in the visual, creative and performing arts. Each year, up to 141 students are named as Presidential Scholars, one of the nation’s highest honors for high school students.

“There has been a dream of [the alumni association] for a long time to have a permanent archive,” Knox said.

The Russell Special Collections Building is an especially appropriate location because of the close relationship between U.S. Sen. Richard Russell and President Johnson, Knox said. Additionally, gifted education expert Felice Kaufmann, who has spent her professional life studying the first five classes of Presidential Scholars, began her career at UGA studying under E. Paul Torrance, a pioneer in research on the identification and development of creative potential.

“Dr. Kaufmann continues to research the scholars through their lives. It is one of the unique longitudinal education studies, especially of gifted kids and what happens to them,” Knox said.

Torrance’s collection also is held in the university archives. His work was widely published: he had a total of 1,871 publications, including 88 books, 408 journal articles and 538 reports, manuals and tests, making him one of the most published faculty members in UGA’s history. Notably, Torrance developed the Torrance Tests of Creative Thinking, which test creativity using simple trials based on fluency, flexibility, originality and elaboration. These have often been used in admission into gifted programs, especially in Georgia. The tests are particularly well-regarded because they appear relatively free of racial or socioeconomic bias, and teachers often find them easy to administer and score.

“The university archives is very pleased to have the Presidential Scholar Alumni papers deposited with us. It will be of great interest to those researching gifted students as well as the alumni organization itself,” said Caroline Killens, head of university archives. “We hope that many more items will be added to this collection now that it has a home and we look forward to working with the Presidential Scholars Alumni Association to house the materials they acquire.”

Presidential Scholar alumni include almost 7,000 people, the top high school scholars of the last 50 years. The group has 59 Rhodes Scholars, 43 Marshall Scholars, university presidents, Grammy winners, Pulitzer winners, a U.S. Poet Laureate, a governor, an ambassador and a Miss America. “I think of the Presidential Scholars as the most quintessentially American of all scholastic honorees, with a diversity of recipients that might make a Walt Whitman proud,” said Knox. “I’m proud to have their keepsakes cared for here at UGA. “