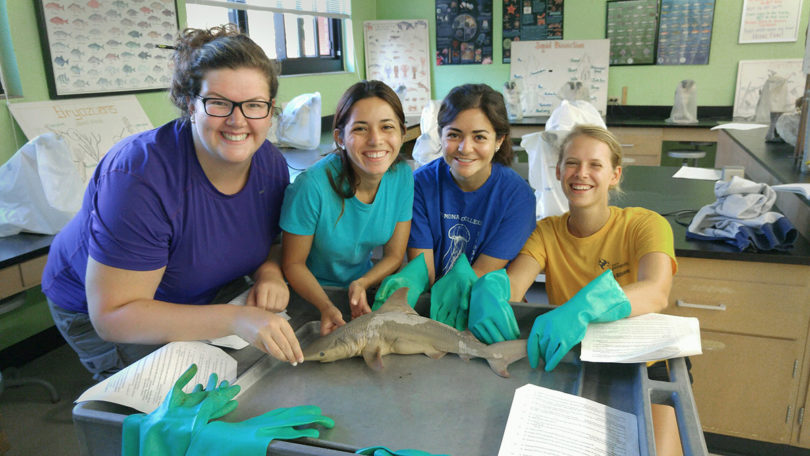 Four recent college graduates have been awarded one-year marine education internships with UGA Marine Extension and Georgia Sea Grant. Funded by Georgia Sea Grant, one of 33 National Oceanic and Atmospheric Administration Sea Grant programs located throughout the country, the interns will serve as educators for students, teachers and the general public.

The interns will spend 50 weeks on Skidaway Island at the Marine Education Center and Aquarium, part of Marine Extension, which is a unit of UGA Public Service and Outreach. They will offer educational programs focused on the ecology of Georgia’s estuaries and coastal islands.

The interns were selected from an international pool of applicants and began their training in September. They are Kayla Clark from Old Chatham, New York; Jessica Hernandez from Bakersfield, California; Caitlin Shea-Vantine from Bridgeport, Connecticut; and Yesenia Feliciano from Perth Amboy, New Jersey.

The new cohort brings a range of skills and experiences to the program. Clark, who graduated from Smith College in Northampton, Massachusetts, with a degree in sociology, worked as an environmental educator at multiple locations. An avid researcher of marine animal life, Hernandez received her degree in biology from Pomona College. Shea-Vantine, who became interested in marine life after her experience at the Maritime Aquarium summer camp, located in Norwalk, Connecticut, earned a biology degree from Saint Michael’s College in Colchester, Vermont.

Feliciano, who has a bachelor’s degree in marine science from Stockton University, has experience with peer mentoring in an underwater robotics course.

“I am always surprised at the quality of the interns we get from around the country,” said Mark Risse, director of UGA Marine Extension and Georgia Sea Grant. “It is a real win-win situation where we get some of the best and brightest students to work with our programs, and they get a one-year internship that will help them land the career of their choice.”