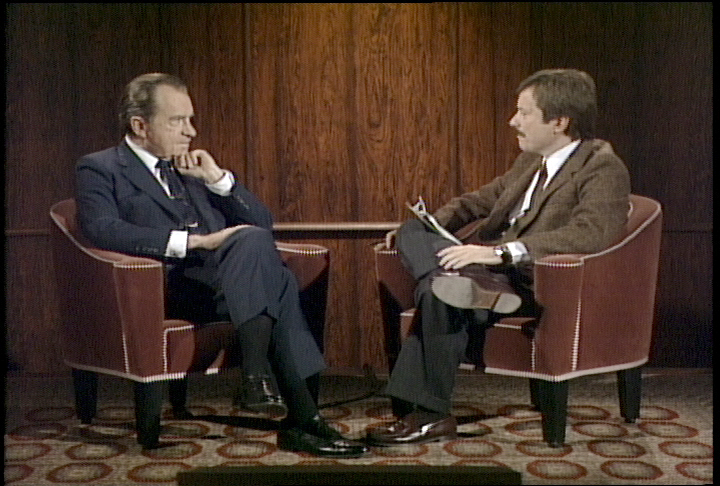 In conjunction with the former president’s birthday, Jan. 9, the UGA Libraries is announcing the completion of the project.

The videotapes had been largely unseen outside of the group that produced them in 1983. They were donated to the UGA Libraries by Jesse Raiford, president of Raiford Communications, nearly 15 years ago. Raiford said he selected the UGA Libraries as the recipient of the tapes because he wanted them to be housed at an educational institution that would make them accessible to the public

The interviews-with full transcription-have been made available online. The interviews are an oral history of the former president’s life, from his childhood to his decision to resign the presidency, said Ruta Abolins, director of the Walter J. Brown Media Archives and Peabody Awards Collection. Copies of the tapes are also available for viewing at the Richard B. Russell Building Special Collections Libraries.

“With surprising candor, President Nixon sat down over a period of several months in 1983 and talked with his former aide, Frank Gannon, about his life, his career of public service and his unprecedented resignation from office,” said P. Toby Graham, university librarian and associate provost at UGA. “Included in the tape excerpts are discussions on the importance of being a good poker player, the life of his young family, the White House taping system, his thought process leading up to his decision to resign and his startling answer to the question, ‘Do you think you’ve had a good life?'”

The interviews will be presented online using Oral History Metadata Synchronizer, a technology developed to enhance online access to oral history. It is an open source, Web-based system providing users word-level search capability and linking a search term to the corresponding moment in the recorded video interview.

The interviews are of “incalculable value from a scholarly/research point of view,” said Fred Guida, a former professor of mass communications at UGA who appraised the tapes as part of the donation process. “The Nixon/Gannon interviews are, in fact, priceless in terms of their scholarly/historical value,” he said.

Guida called the gift “a major untapped resource,” and said that while there is an abundance of film and video available covering or featuring Nixon in the years prior to his presidency, he made relatively few post-resignation television appearances. The Gannon interviews represent his most substantial and lengthy post-presidency television appearance.

Taking place nearly a decade after Nixon’s resignation, the interviews were conducted in four groups of two- and three-day sessions spread over seven months. Each two-hour interview was organized around a specific topic, including Vietnam, China, the Soviet Union, the Middle East, the Watergate scandal and Nixon’s resignation as president, U.S. domestic policies, U.S. presidents, foreign leaders and Nixon’s reflections on his political career.

A sense of trust exists between Nixon and Gannon, a friend and former employee, allowing Nixon to be more candid than he was in any other interview setting, said Guida. “It is precisely because Mr. Nixon trusted Mr. Gannon that the interviews are as revealing and substantive as they are. Perhaps more to the point, the interviews contain no evidence that Mr. Gannon gave Mr. Nixon any sort of preferential treatment; there are no evasions nor are there any ‘softball’ questions,” Guida said.

About two-thirds of the interview material can be considered rare to unique in terms of subject matter, said Gannon, who served in the White House as a special assistant to the president, and flew with Nixon to California aboard Air Force One following his resignation in 1974. Gannon spent the next four years organizing the researching and writing of the former president’s memoirs, “RN: The Memoirs of Richard Nixon, 1978.”

The interview is divided into segments by topic, with some, such as Vietnam, subdivided further to facilitate searching. A search of the transcript also reveals the specific minutes in which the references are made.

Kathleen Carter, a media archives intern, said she knew little about Nixon before working on the project this fall. “All I knew was he resigned the presidency,” Carter said. “Now I definitely know a lot of things that I never expected to know about him.”

Additional materials, such as photos, a link to a map for Nixon’s birthplace and other supplemental information are also being added to the archives.

“Richard Nixon has a very complicated legacy,” Carter said. “It was really interesting to learn about him from his own perspective while working with these interviews.”