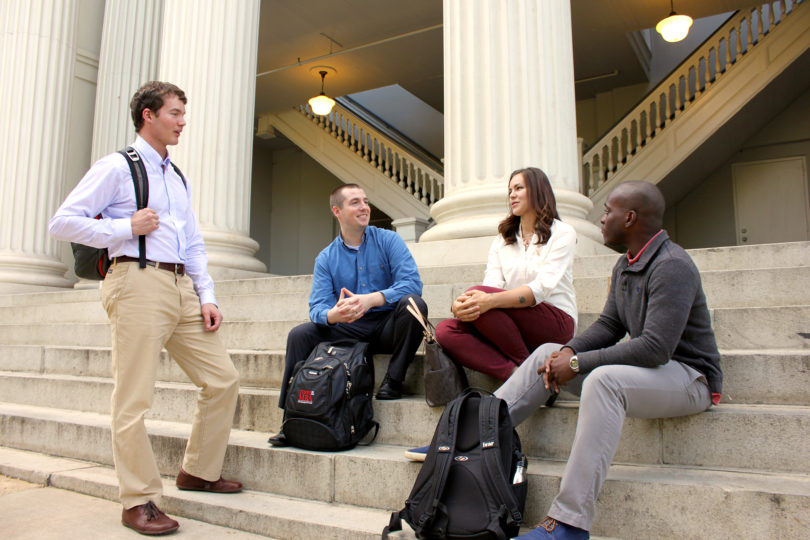 Student veterans at UGA include (from left) Adam Johnson

Athens, Ga. – The University of Georgia has been named to the “Military Times Best for Vets: Colleges 2015” rankings. Only 140 colleges and universities nationwide have achieved the designation, which results from a comprehensive school-by-school assessment of veteran and military students’ success rates.

“UGA is proud to be recognized for its commitment to the success of our student veterans,” said Victor K. Wilson, vice president for student affairs. “They have given so much to defend our freedom, and we are eager to support them in every way possible.”

The Military Times is a series of digital platforms and newsweekly magazines that are a principal source for independent news and information for service members and their families. They require schools to meticulously document an array of services, policies, accommodations and financial incentives offered to military and veteran students and to describe many aspects of veteran culture on campuses.

“We factor in what is, to our knowledge, the most detailed school-by-school data on veteran students’ academic success anywhere, including graduation, retention, persistence and course completion rates,” said Amanda Miller, editor of Best for Vets.

In 2012, only 11 percent of the hundreds of schools surveyed could provide that level of detail. The figure has risen to nearly 45 percent in 2014, indicating a national surge in student veteran service, she said.

UGA’s comprehensive service to student veterans is the result of collaborations across multiple divisions and departments, including academic affairs, the registrar’s office, student affairs, dean of students office and the Student Veterans Resource Center.

“The Military Times rankings are where most veterans start when they’re exploring where to attend school,” he said. “Given the support that I and other veterans have received here, both before and since we’ve enrolled, it’s not surprising that UGA has made the list.”

Pamela Whitten, senior vice president for academic affairs and provost, noted that the ranking reflects the university’s commitment to supporting the success of its student-veterans.

“Our student-veterans have served our nation with valor and distinction,” Whitten said. “One of the ways that we honor their service is by providing them with the very best possible learning environment.”

For the full Best for Vets: Colleges 2015 rankings, see www.militarytimes.com/bestforvets-colleges2015.

UGA was also recently named one of Military Advanced Education magazine’s “Top Schools” for 2015. UGA will be included with other colleges and universities that provide outstanding service to military veterans in that publication’s 2015 Guide to Colleges and Universities.

The university was honored again this year by GI Jobs Magazine as a “2015 Military-Friendly School” and continues to maintain active affiliation with both the Student Veterans of America and the Got Your Six campaign, where faculty and staff attend a training session to become certified as veteran-friendly.

A significant contribution to the Student Veterans Resource Center endowment fund by the First Data Corporation of Atlanta is allowing the relocation and expansion of the resource center’s student veterans lounge. A gift from the Reynolds Veterans Association of Greene County has also assisted the project.

A dedication ceremony for the new lounge is scheduled on Nov. 21 at 4 p.m.

The Student Veterans Resource Center is a department within UGA Student Affairs.

For more information about services for student veterans, call 706-542-9629 or see http://dos.uga.edu/svrc.

The Division of Student Affairs comprises 19 campus departments that enhance the learning environment for students at the University of Georgia by stimulating the learning process, integrating the in-class and out-of-class experiences, promoting an environment conducive to growth and discovery and facilitating intellectual, spiritual, social, occupational, physical, cultural and emotional development. For more information, see http://studentaffairs.uga.edu.