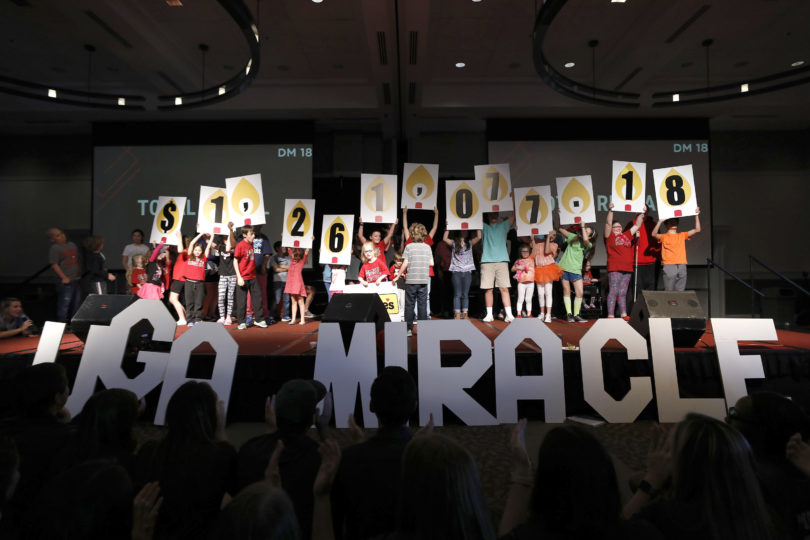 More than 3,000 students representing more than 50 student organizations gathered in the Tate Student Center Grand Hall Sunday morning to celebrate raising $1,261,077.18 for Children’s Healthcare of Atlanta. This is the third year in a row that UGA Miracle, the University of Georgia’s largest student-run philanthropy, has achieved a seven-figure fundraising total.

Beginning at 10 a.m. on Saturday, Feb. 17, and lasting until the same time Sunday, the entire student center was filled with students, faculty and staff for UGA Miracle’s annual Dance Marathon. Throughout the night, participants danced, listened to live music and took pictures with Hairy Dawg. 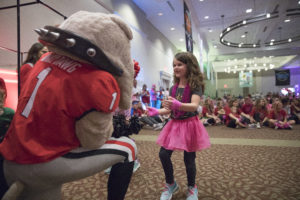 Hairy Dawg greets one of the Miracle Children who attended the Dance Marathon. (Photo by Chad Osburn/UGA)

Nearly 50 “Miracle children,” the Children’s Healthcare patients who interact with UGA Miracle’s student members during the year, and their families attended the event, and 24 of them took the stage one at a time throughout the night to share their inspirational stories.

Activities for the children and their families include arts and crafts, sharing of personal stories, participating in a scavenger hunt and a lot of dancing.

The event also features a “Standing Challenge,” where participants do not sit for the entirety of the event to honor the many children who cannot stand and may never be able to stand again.

Every dollar raised up to $1 million supports the Comprehensive Inpatient Rehabilitation Unit at Children’s Healthcare to fund state of the art equipment and facilities, including the UGA Miracle Gym. Beginning last year, every dollar raised above $1 million supports the Aflac Cancer and Blood Disorders Center to fund groundbreaking pediatric research.

John Caras, UGA Miracle’s internal director, is amazed by the passion and dedication of UGA students.

“I have come across some of the most selfless, inspiring people,” Caras said. “Seeing these students fight for those who can’t fight for themselves makes me proud to be a part of UGA Miracle and to be a student of the University of Georgia.” 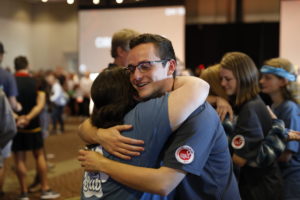 Davis Haines of UGA Miracle gets a hug during the Dance Marathon. Haines is honoring his brother, Carter, who succumbed to brain cancer. (Photo by Andrew Davis Tucker/UGA)

Davis Haines, UGA Miracle’s communications director, participates as a way to honor his older brother, Carter, who was diagnosed with brain cancer and treated at Children’s Healthcare.

“After being sick for a little under a year he passed away,” Haines said. “[Being involved] also helped me along my grieving process and opened the door for something I truly had a heart for.”

This was the 23rd annual Dance Marathon. The event is a symbolic gesture of sacrificing a day in support of children who have had to sacrifice much more of their own time to combat illness in hospitals. Since its inception, Miracle has raised more than $8 million for Children’s Healthcare–$4 million of that total coming in the last four years. 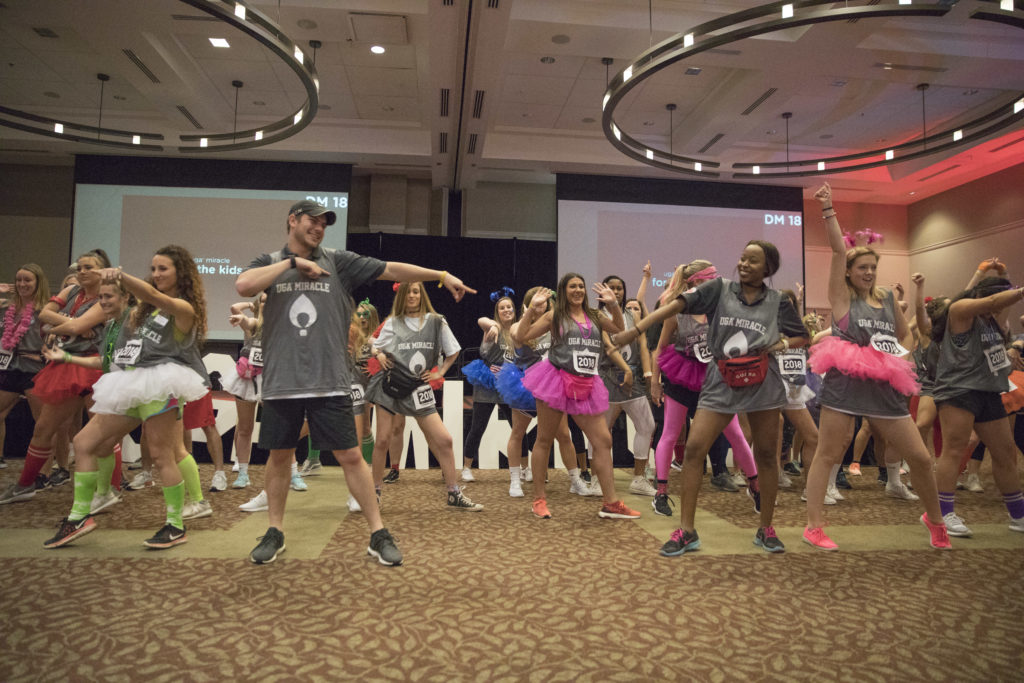 UGA Miracle offered several events throughout the past year, including the annual Doughnut Dare 5K, Miracle at Midnight, and the 23rd Annual Classic City Tour of Homes, which raised a combined $24,000. The group set a record during its $100 Day, raising approximately $353,000 in a single day.

For the students, it’s all about connections—to the Miracle children and their families, and to each other.

“There is never a day where I do not feel connected to this cause and this organization,” Haines said. “I am certain that this organization hosts the most hardworking, impressive and loving people on this campus.”

UGA Student Affairs
The Division of Student Affairs comprises 18 campus departments that are committed to inspiring students to engage meaningfully, grow intellectually, and build character so they will create thriving communities.