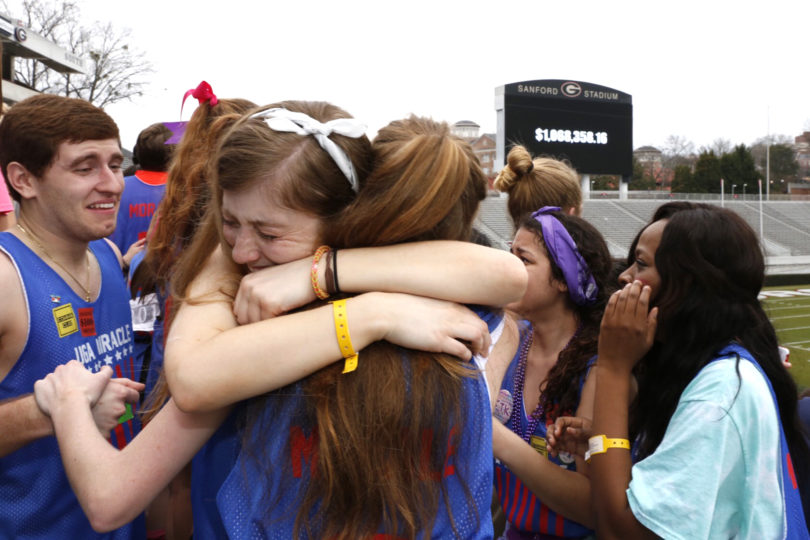 Students celebrate after seeing the total amount of funds raised by UGA Miracle. A record-setting $1

One organization at UGA strives to make sure all children—those with childhood illnesses and those without—are afforded the same opportunities for fun. The university’s largest student-run philanthropy, UGA Miracle, works annually to raise money and awareness for Children’s Miracle Network Hospitals, specifically Children’s Healthcare of Atlanta.

For 21 years, UGA Miracle has hosted Dance Marathon as its annual fundraising finale. The 24-hour event is a symbolic gesture in support of children who have had to sacrifice much more of their own time to combat illness in hospitals. Since its inception, the student organization has raised nearly $6 million for Children’s Healthcare, with more than $2 million of that total coming in the last three years.

From 10 a.m. on Feb. 20 to 10 a.m. the following morning, students, faculty and staff filled all three levels of the Tate Student Center, dancing, playing games and sharing stories. More than 2,100 UGA students raised a record-setting $1,068,358.16 for Children’s Healthcare.

UGA Miracle’s efforts not only benefit children with life-­threatening illnesses, but also children who need stitches, have a concussion or just need a checkup. “It means a lot that (UGA Miracle) can benefit so many kids,” said Alexa Crow, UGA Miracle’s marketing director.

Crow joined UGA Miracle during her freshman year and was paired with Allison Johnson, who is now 12 years old. As an infant, Johnson fell out of a two-story window, fracturing her skull. Her parents rushed her to the hospital, and doctors told them she would not make it through the night. Children’s Healthcare of Atlanta was able to save her, and she recovered fully.

Johnson’s story is not the outlier for UGA Miracle. The children and their families benefit both from the money raised by the organization and the love and support the UGA students, known as miracle makers, give.

Henry Shephard, a rambunctious 10-year-old, was diagnosed with osteosarcoma in December 2014. His family joined UGA Miracle after being contacted by miracle maker Rob Hardell.

Shephard’s father, Scott Shephard, appreciates the love his family has been afforded because of UGA Miracle.

“It is overwhelming how much these students care,” he said. “They are aware of our situations and have gotten behind us.”

The passion these students have for UGA Miracle families is powerful, said June Gossling, mother of Grant, a young boy diagnosed with neuroblastoma.

“My family pals, Brandy, Alexis and Collin, have become a part of our family,” she said. “They are truly older brothers and sisters to our five kids.”

UGA Miracle contacts over 60 families throughout the year, and this year almost every family was able to make it to Dance Marathon. At the event, families had the opportunity to share their stories, and UGA students spoke about the love they have for these families and the excitement they feel when a child gets better because of the money they help raise.

“These families need people who care,” said Aliya Nurani, a third-year communication studies major. She and many students at the event raved about being able to see how their efforts are helping kids get better.

Around the nation, college students are witnessing how their fundraising efforts can benefit so many people.

Zucker, along with the rest of the executive board, came up with this year’s fundraising goal of $1 million. They decided that this was the year to be bold, take a leap and set a goal that got their members excited about and “shatter expectations” of what people think college students are capable of.

“There is no greater example than Dance Marathon of what happens when college students who are passionate come together and unify for a common cause,” said Zucker, a public relations and international affairs double-major from Johns Creek. “When we do that, the sky is the limit.”

The Miracle bug has infected over 450 universities and colleges around the country, raising a collective total of over $100 million.

According to Crow, this program is a rapidly growing movement. It is getting people involved, changing their college experience and allowing them to become a part of something bigger than themselves.

UGA Miracle offered several events throughout the past year, including a Michael Ray concert at the Georgia Theater in downtown Athens, the annual Doughnut Dare 5K and a $100 day, which raised more than $215,000 in a single day.

“UGA has the most amazing students,” Wilson said. “Seeing the impact they’re able to make on our communities now-just imagine the good they can do after graduation for years to come. The future looks to be in excellent hands.”