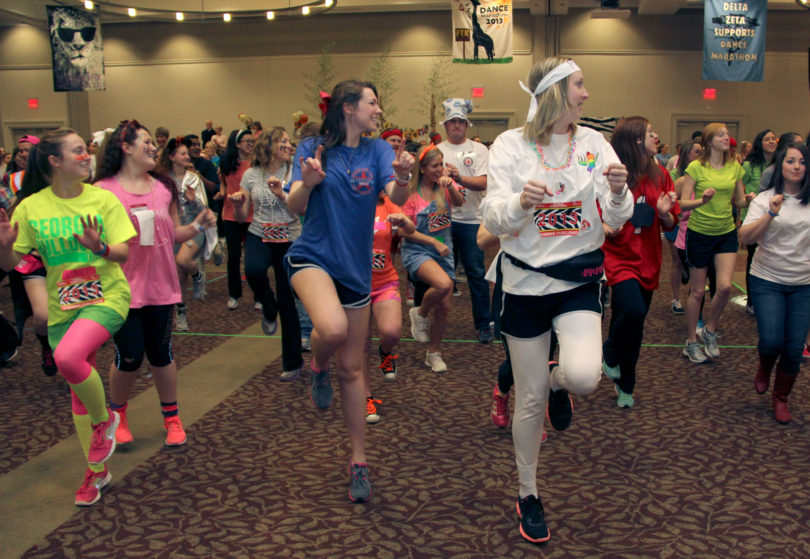 More than 1,300 registered participants and university students will unite with children who have been treated at Children’s Healthcare of Atlanta for a full day of dancing, entertainment and enthusiasm all in celebration of 35 “Miracle Children” and their fight against illness and injury.

The 24-hour event features catered meals every four hours, a talent show featuring patients from the hospital, a hypnotist, UGA fire baton twirlers and much more.

“For 24 hours, former and current patients at Children’s Healthcare of Atlanta can stop thinking about their illness and feel like they are on top of the world,” said Matt Hacker, one of the dance marathon organizers.

Activities for the children and their families include arts and crafts, sharing of personal stories, participating in a scavenger hunt and tons of dancing.

In addition, many UGA students choose to participate in a “Standing Challenge,” where they do not sit for the entirety of the event to honor the many children who cannot stand and may never be able to stand again.

Last year’s participants accomplished much more than staying up for 24 hours straight; they made history raising $346,289.13, the highest amount ever achieved in all 18 years the organization had been on campus.

Now in the organization’s 19th year, UGA Miracle has declared its “Mount Everest:” to raise $415,000 for Children’s Healthcare of Atlanta.

“We have never announced our fundraising goal publicly,” Hacker said.  “But with the support we have been receiving, we are confident about reaching the goal and making a lasting impact on Children’s Healthcare of Atlanta.”

UGA Miracle will reveal the total amount raised throughout the year at the end of the 24-hour event.

More information about UGA Miracle and details about the Dance Marathon are at www.ugamiracle.org.