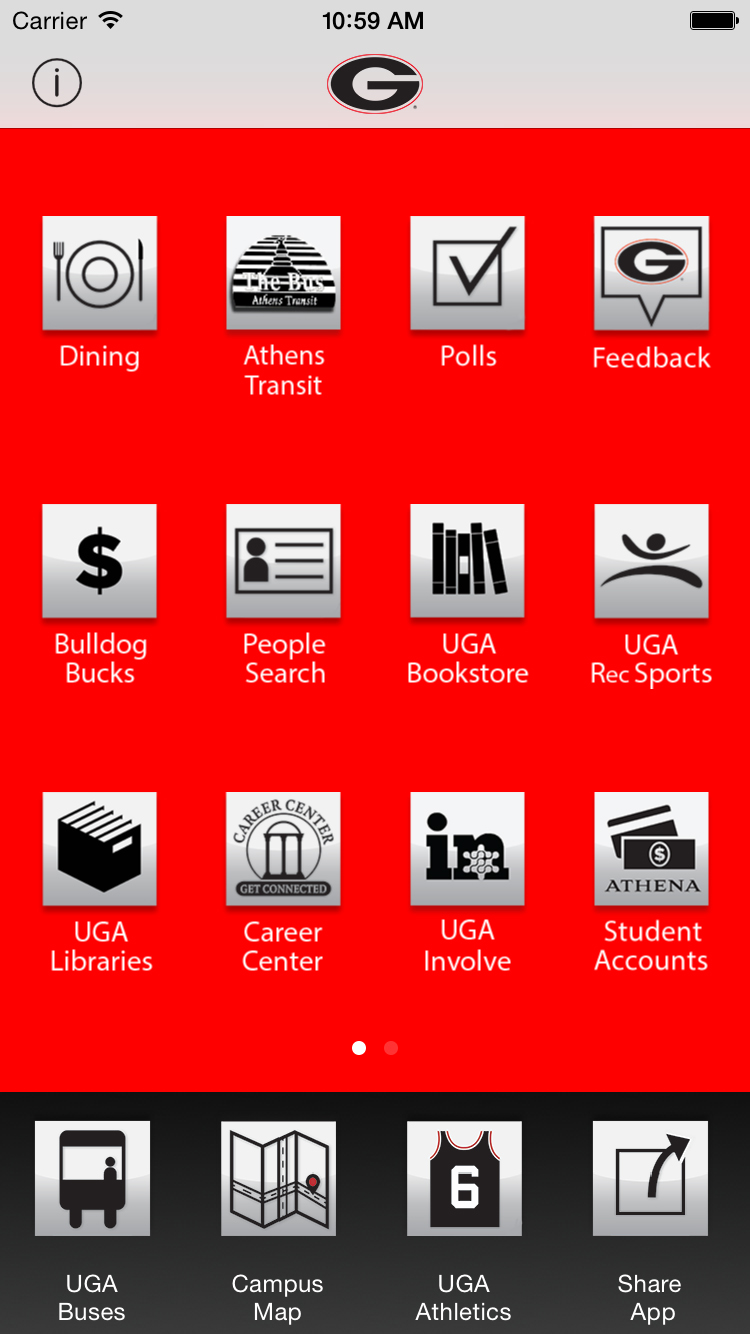 The official mobile app for the University of Georgia now includes a real-time bus tracker for Athens Transit.

Athens, Ga. – The official mobile app for the University of Georgia now includes a real-time bus tracker for Athens Transit, making it easier for students, faculty, staff and visitors to travel between campus and the surrounding Athens-Clarke County.

Since its initial launch in 2013, the UGA mobile app’s most popular feature for students has been a bus tracker for Campus Transit. Now, Athens Transit buses are included in the app, which tracks buses and displays schedules of when buses are expected to arrive at each stop.

The UGA mobile app also includes a map of campus with the ability to select points of interest, such as computer labs, parking decks, bike repair stations and print kiosks. It also features daily menus at UGA dining commons, recreational sports schedules, live streaming of WUOG radio, access to the university’s learning management system and more. The UGA mobile app is free to download and is available in the App Store for Apple devices and Google Play for Android devices.

“With student housing rapidly expanding across Athens and more students using Athens Transit services, it made sense to include the Athens Transit bus tracker on the UGA mobile app,” said Johnelle Simpson II, president of UGA’s Student Government Association. “This, along with multiple other initiatives, is what SGA is working diligently on to connect students to resources and make them more accessible.”

UGA students, faculty and staff can ride Athens Transit buses for no charge by presenting their UGACard. The university and Athens-Clarke County government have a long-standing agreement to provide transportation for UGA students and employees on Athens Transit.

“Athens Transit and the Athens-Clarke County unified government are extremely pleased with the inclusion of the Athens Transit routes and bus arrival information as a function on the UGA app,” said Butch McDuffie, director of Athens Transit. “This will provide real-time transit information to all users whether they are UGA affiliated customers or our citizens at large. This is a culmination of several months of UGA and Athens Transit staff work, and is yet another example of the great partnership between the university and the local government.”

“The UGA mobile app has been an outstanding example of the university listening to the needs of students and making services they requested available on the app,” said Timothy M. Chester, vice president for information technology. “We’ve worked closely with the Student Government Association and a number of units across the university to make the UGA mobile app the prime spot for students to navigate their academic, professional and recreational lives at the university.”

For more information about the UGA mobile app, see http://mobileapps.uga.edu.