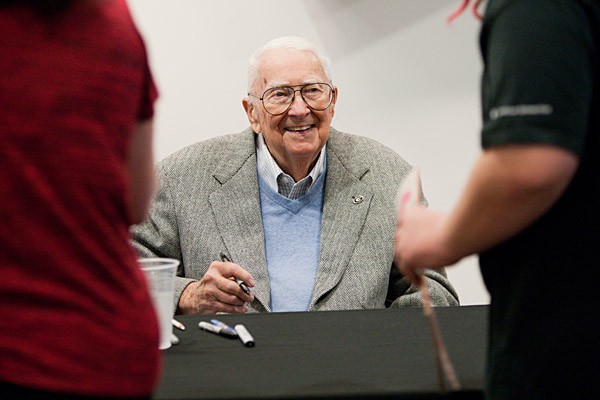 Jack Davis, one of the founding editors of Mad magazine, died July 27 at the age of 91.

Born Dec. 2, 1924, in Atlanta and raised in Georgia, Davis attended UGA on the GI Bill and studied with artist Lamar Dodd. Davis honed his skills at UGA drawing for The Red & Black, the student newspaper, and Bullsheet, an Athens humor publication.

He later moved to New York, where he attended the Art Students League before working with William Gaines’ EC Comics. He later supplied covers for Time and TV Guide, created album cover art and designed movie posters. He endeared himself to UGA fans over the decades with his famous caricatures of a bulldog usually pummeling opposing team mascots and/or celebrating after UGA victories.

“Jack Davis was a gifted illustrator and a legendary Bulldog,” said UGA President Jere W. Morehead. “His artwork has left a lasting legacy for Georgia athletics, and he will be deeply missed.”

Davis is survived by his wife, Dena, of St. Simons Island; a daughter, Katie Davis Lloyd, and her husband, Chris, of Athens, and their two daughters, Sara Lloyd Alias and Molly Lloyd; a son, Jack Davis III, and his wife, Ann Davis, of Atlanta.

The funeral for Davis was held July 29 on St. Simons Island.