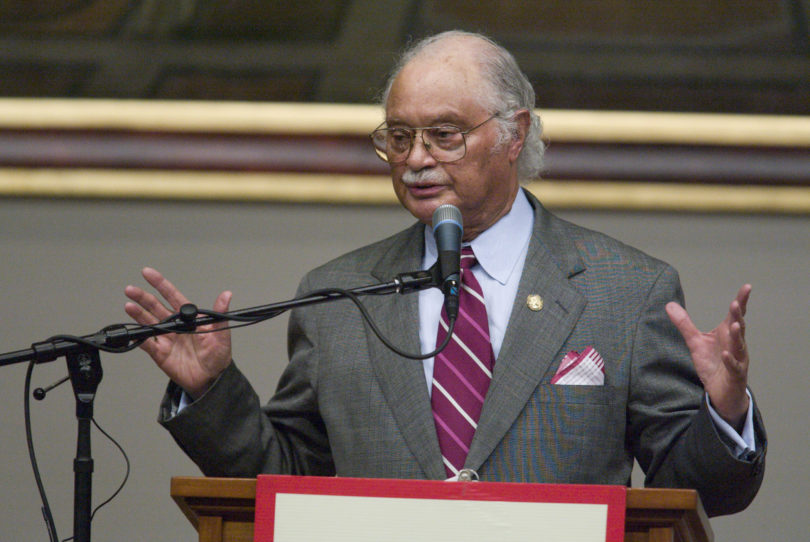 Civil rights pioneer Horace Taliaferro Ward, the first African-American to apply for admission to UGA, died April 23 at the age of 88.

A retired federal judge, Ward is credited with helping to set the tone for the civil rights movement in Georgia in the 1950s.

“The University of Georgia mourns the loss of Judge Horace Ward, whose courage and determination paved the way for African-American students to gain equal access to the state’s flagship institution of higher learning,” said President Jere W. Morehead. “Judge Ward leaves behind a legacy of dedicated public service. The thoughts of the university community go out to his friends and family.”

Born in LaGrange, Ward graduated as valedictorian from East Depot High School. After receiving his bachelor’s degree from Morehouse College in 1949 and earning a master’s degree from Atlanta University in 1950, he applied for admission to UGA’s School of Law.

When his application was denied, Ward sought legal resolution to the matter. When that effort failed, Ward joined the U.S. Army and served a tour of duty in Korea in the 1950s. He later applied to and was accepted in the law school at Northwestern University in Chicago.

After earning a Juris Doctor from Northwestern University in 1959, Ward returned to Georgia and joined the legal team—led by civil rights attorney Donald Hollowell—that represented Hamilton Holmes and Charlayne Hunter-Gault in their landmark efforts to enroll at UGA in 1961.

While a partner in the law firm of Hollowell, Ward, Moore and Alexander, Ward worked on several other significant civil rights cases throughout Georgia.

In 1964, Ward became the second African-American since Reconstruction elected to the Georgia General Assembly. Re-elected to four terms in the state Senate, Ward was appointed to several key legislative committees.

In 1974, Ward became the first African-American trial court judge in Georgia when he was appointed to the Civil Court of Fulton County. Three years later, he was elevated to Fulton County Superior Court judge.

In 1979, Ward was appointed to the U.S. District Court for the Northern District of Georgia—and sworn in as a federal judge in the same courtroom in which his lawsuit to enter UGA had been dismissed 22 years earlier.

Ward took senior status in 1994 and retired from the federal bench in 2012.

He received an honorary Doctor of Laws degree from UGA in 2014.

“We at the School of Law mourn the passing of this legal giant, the Honorable Horace Taliaferro Ward,” Georgia Law Dean Peter B. “Bo” Rutledge said. “Although his application to the law school was denied, we at Georgia Law remain grateful for Judge Ward’s acceptance of the honorary Doctor of Laws, which was a well-deserved recognition. We also express our sincere condolences to his family.”

Ward’s story is the foundation for UGA’s Foot Soldier Project for Civil Rights Studies, an interdisciplinary research effort that seeks to uncover and illuminate the history of successful efforts in the state and region that had an impact on the civil rights movement.

He is the subject of the award-winning biography Horace T. Ward: Desegregation of the University of Georgia, Civil Rights Advocacy, and Jurisprudence, authored by UGA School of Social Work Dean Maurice Daniels, who also served as executive producer and senior researcher on Foot Soldier for Equal Justice, Parts I and II. Both award-winning documentaries explore Ward’s story, the history of desegregation at UGA and the segregation policies in higher education across the country.

“Generations of Georgians are the beneficiaries of Judge Ward’s activism, civil rights work, public service and jurisprudence,” Daniels said. “I am keenly aware and immensely grateful that he and his comrades made it possible for me to teach and research and serve as a dean at the University of Georgia.

“I was deeply humbled and honored to confer with him in writing his biography and developing a civil rights documentary chronicling his ground-breaking contributions to society,” he also said. “I will miss him and his wise counsel.”