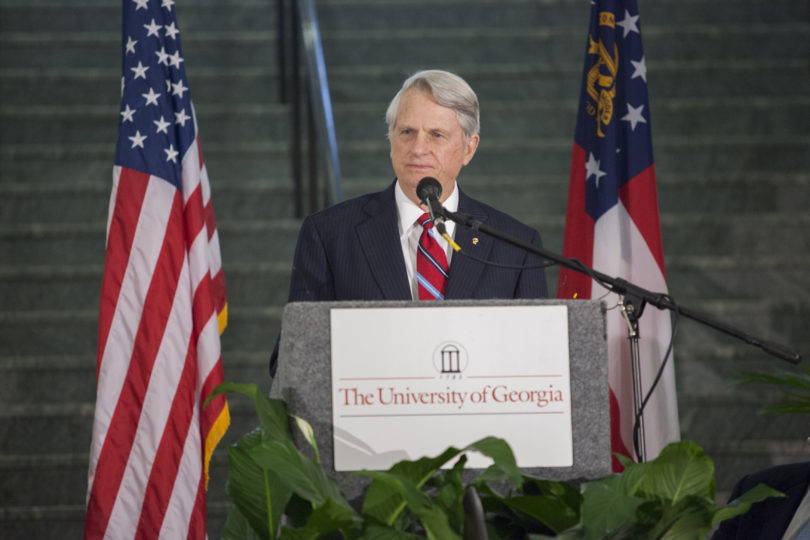 Zell Miller addresses the audience during the October 2008 dedication of the Zell B. Miller Learning Center. (UGA photo)

Zell Miller, a former governor, U.S. senator and creator of the HOPE Scholarship, passed away Friday. He was 86.

Miller was an influential politician in Georgia for more than 50 years, but much of his legacy rests on his innovative and far-reaching efforts to improve education.

The HOPE Scholarship, Georgia’s unique scholarship and grant program that rewards students with financial assistance in degree, diploma and certificate programs at colleges and universities, has sent more than 350,000 Georgians to college.

He also created the Zell and Shirley Miller Fellowship, which is awarded annually to a doctoral student in the University of Georgia’s Institute of Higher Education.

“The University of Georgia mourns the loss of one of this state’s greatest champions,” said UGA President Jere W. Morehead. “Governor Miller’s impact on higher education in Georgia—and indeed the nation—was profound. The University of Georgia would not be the world-class institution it is today without his vision and dedicated leadership. The thoughts and prayers of our university community go out to his family and friends.”

During his administration, faculty salaries in the University System of Georgia grew nearly 30 percent and higher education funding nearly 60 percent. Many of UGA’s East Campus buildings were funded while he was governor. Miller authorized nearly $300 million to repair and renovate buildings in the university system and almost $1 billion in capital spending.

Upon leaving the governor’s office in January 1999, Miller accepted teaching positions at Young Harris College, Emory University and UGA, where he served as the Philip H. Alston, Jr. Distinguished Chair in Political Science until he was appointed to the U.S. Senate in July 2000 after the death of Sen. Paul Coverdell.

The Zell B. Miller Learning Center at UGA was named in his honor in 2008. This innovative, technologically advanced learning environment features a unique combination of library and instructional space, modern classrooms, the best in campus computing and comprehensive instructional support for faculty.

Zell Bryan Miller was born on Feb. 24, 1932, in the small mountain town of Young Harris, Georgia, where he received an associate degree from Young Harris College. He served for three years in the United States Marine Corps before earning a bachelor’s degree and master’s degree in history at UGA.

He was the author of several books, including “The Mountains Within Me,” “Great Georgians,” “They Heard Georgia Singing,” “A deficit of Decency” and “Purt Nigh Gone: The Old Mountain Ways.”