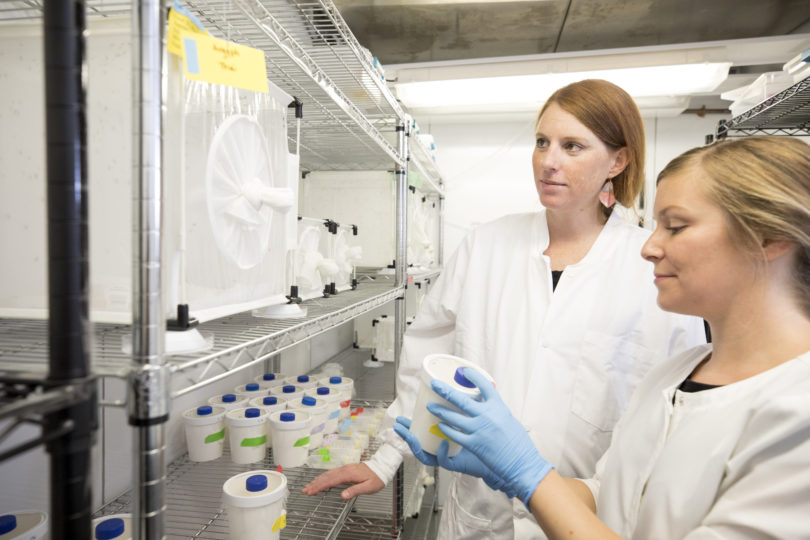 Courtney Murdock (left), assistant professor with a joint appointment in the Odum School of Ecology and the College of Veterinary Medicine, is working with colleagues in the Brazilian state of Minas Gerais to study how temperature impacts the spread of the Zika virus among disease-carrying mosquitos.

UGA one of eight universities nationwide recognized for international collaboration.

The University of Georgia is one of eight universities nationwide to be recognized for its exemplary international programs and partnerships by NAFSA, a nonprofit association dedicated to international education.

The university’s network of partnerships within the Brazilian state of Minas Gerais received NAFSA’s 2018 Senator Paul Simon Spotlight Award, which is named after the late Illinois senator who was a strong advocate for international education and cross-cultural learning.

“The University of Georgia is a global enterprise, with reach and impact that span the world,” said UGA President Jere W. Morehead, “and I want to congratulate the faculty at UGA whose dedication to international research and collaboration is being recognized by this significant award.”

UGA has long considered Brazil a strategically important country based on the quality of its higher education system, and the UGA-Minas Gerais partnership was launched in 2015 after a data-driven analysis of research activity revealed that an outsized portion of UGA’s international research collaborations could be traced to several institutions in Minas Gerais.

“Some of the most important challenges facing researchers today are global in nature,” said Brian Watkins, director of international partnerships at the Office of International Education. “To rise to the challenge, we must bring together international researchers with overlapping strengths and provide them with the support they need to launch new and exciting collaborations. That is what the program in Brazil was designed to do.”

“The breadth of collaborations between colleagues at UGA and institutions within the state of Minas Gerais is truly impressive and bodes well for the future of these institutional partnerships,” said Vice President for Research David Lee.

Graduate and undergraduate students gain invaluable experience working alongside these faculty members, and the UGA-Minas Gerais partnership builds on UGA’s Portuguese Flagship Program, which is funded through the U.S. Department of Defense’s National Security

Education Program and is the nation’s only language flagship program focused on Portuguese.

To date, more than 30 undergraduate students have studied or interned in Minas Gerais through the Portuguese Flagship Program.

“The UGA-Minas Gerais partnership is a model of collaboration, both here on campus and internationally,” said Senior Vice President for Academic Affairs and Provost Pamela Whitten.

She noted that several units have contributed seed funding, including the UGA Office of International Education, Office of Research, Office of the Provost, Latin American and Caribbean Studies Institute, and individual schools and colleges.

“As future leaders of our nation, it is vital that our students have the tools and experiences necessary to thrive in an increasingly interconnected global community,” said Esther D. Brimmer, NAFSA executive director and CEO. “These eight institutions stand as excellent examples of how U.S. universities and colleges can effectively provide opportunities for cross-cultural competency using a varied set of methods. There is no one-size-fits-all when it comes to internationalization. With institutions like these continuing to strive to incorporate creatively global perspectives onto their campuses, I am confident we can prepare our students to succeed and ultimately strengthen ties around the world.”