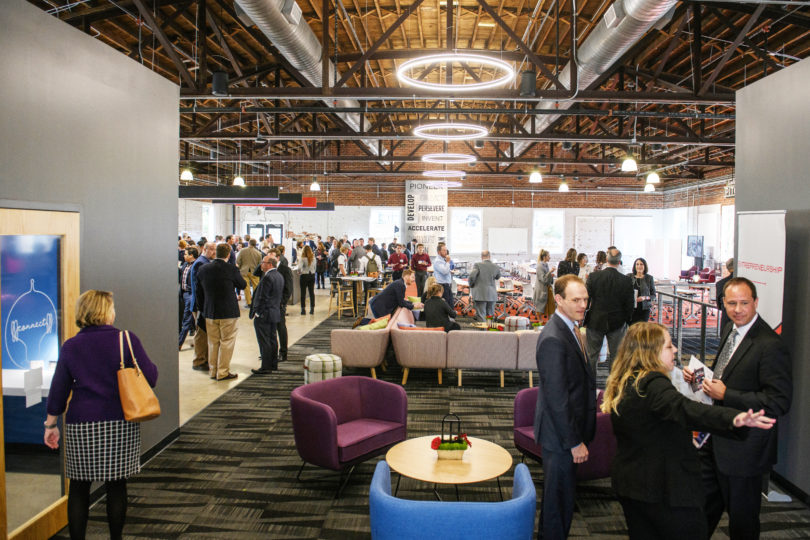 Guests check out the space during the opening of Studio 225 Tuesday. (AJ Reynolds)

Student entrepreneurship at the University of Georgia has a new home, thanks to a just-opened building at the interface of North Campus and downtown Athens.

Studio 225, named for its West Broad Street address, will be UGA’s Student Center for Entrepreneurship. It is also the first physical manifestation of the university’s deepening focus on innovation and entrepreneurship, said Henry Munneke, associate dean for undergraduate programs at the Terry College of Business, which houses the program. 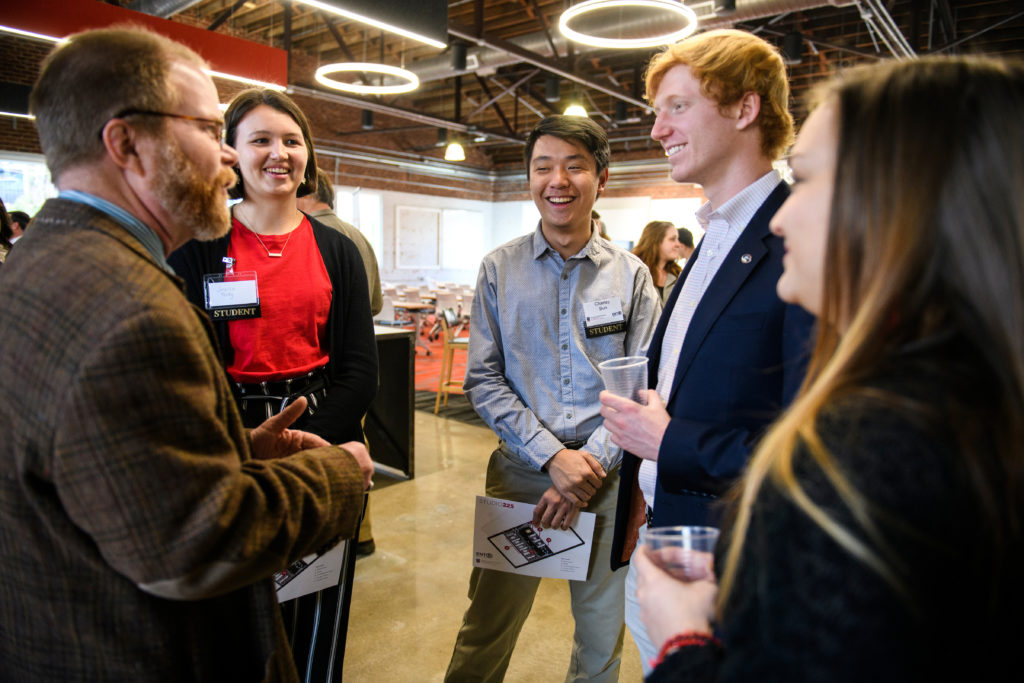 “Studio 225 is a real game-changer for UGA entrepreneurship students and the first step toward a university-wide initiative called the Innovation District; a hub – or district – on campus to foster innovation, entrepreneurship, discovery and industry collaboration,” Munneke said at a March 19 dedication ceremony. “I am already imagining new companies with aspirations to be the next Amazon or Apple being formed within these very walls.”

UGA’s Entrepreneurship Program has grown rapidly since its inception three years ago. What began with one instructor and 33 undergraduates has become a campus-wide initiative that reaches more than 1,000 students each year and includes a wide variety of academic and experiential opportunities.

“Entrepreneurship has been an integral part of the fabric of the University of Georgia since its inception in 1785. Entrepreneurs created the birthplace of higher education in this country, built this campus, created the city of Athens and have continuously contributed to the growth and expansion of this great university,” said Bob Pinckney, director of the Entrepreneurship Program. “Today, we honor those entrepreneurs and their vision and leadership through the dedication of this facility.” 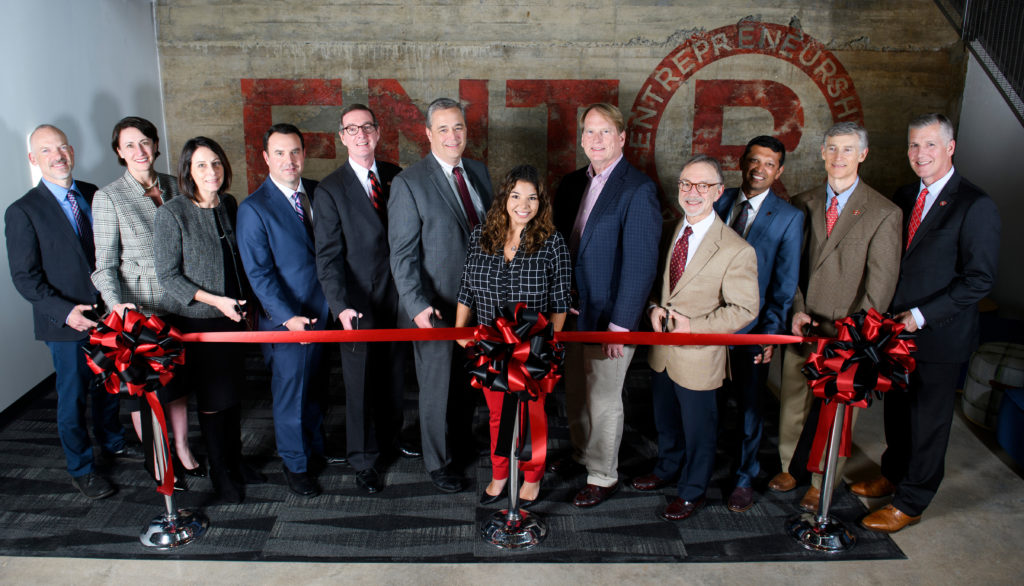 Special guests prepare to cut the ribbon marking the opening of Studio 225 on Tuesday. (AJ Reynolds)

The new space will house faculty offices as well as several spaces where student entrepreneurs can meet with mentors and each other to develop ideas. In addition to huddle rooms, conference rooms and study nooks, the building includes a variety of multipurpose educational rooms – such as a maker space, pitch deck and a collaboration space – where students can work through business plans and showcase ideas to potential investors.

From dreams to reality

The program and its many offerings provide inspiration for students like undergraduate Josefina Rodriguez Sturba, president of UGA’s Society of Entrepreneurs, who said the space will help turn dreams likes hers into reality. 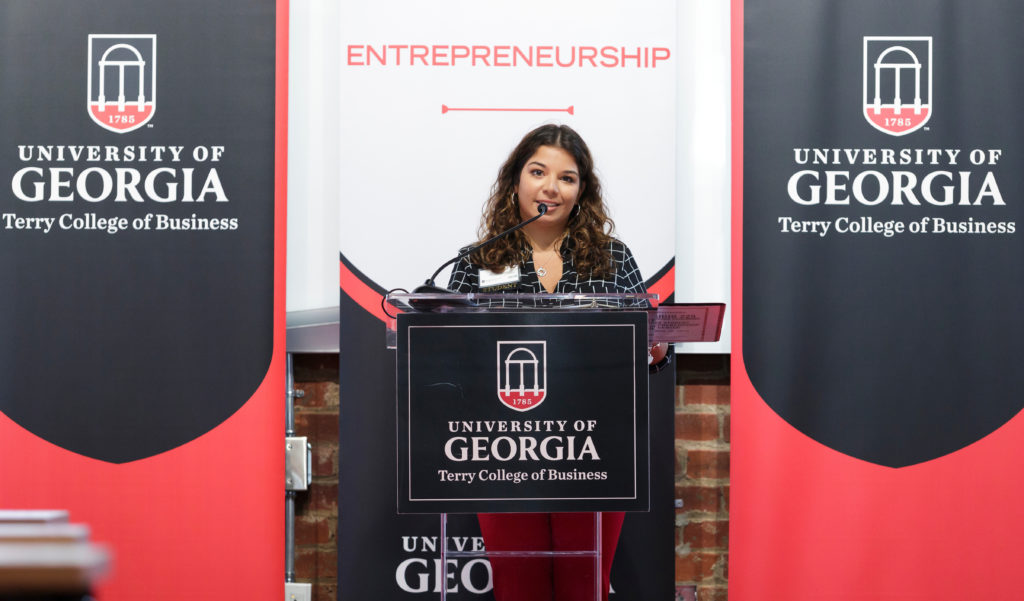 “My plan was to get my degree to improve my family’s business. To my surprise, I found my home in UGA’s Entrepreneurship Program,” she said. “I learned that I could build my own business if I dared. The professors here are my closest mentors and advocates. My peers are my teammates as well as my co-founders.”

The Entrepreneurship Program is a collaborative initiative between UGA and the Athens community. It runs on three tracks – academic, experiential and economic development – with the aim of encouraging and supporting student entrepreneurs across campus. Through classroom opportunities like the Entrepreneurship Certificate Program, contests such as UGA’s Next Top Entrepreneur, and experiences like the Launch Pad Living Learning Community, the program enhances education and bolsters student achievement.

The University of Georgia has a strong history of research and development, technology transfer, and entrepreneurship. Last year, UGA ranked first among 193 U.S. institutions for the number of commercial products reaching the market, according to a survey released by AUTM, a nonprofit organization that tracks technology transfer among universities, colleges and other research institutions.