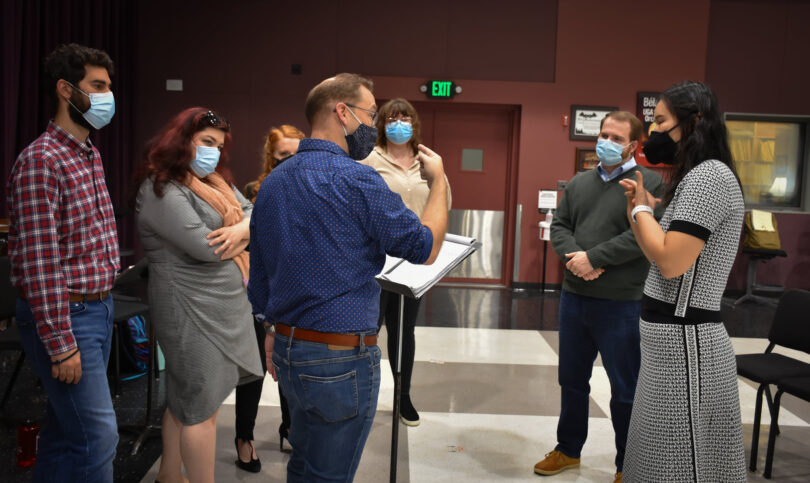 The Hugh Hodgson School of Music Opera Theatre program will be taking the Hodgson Hall stage for a weekend of performances of Richard Wargo’s “A Visit to the Country” and Sir William Walton’s “The Bear.” Opening night is Nov. 12 at 7:30 p.m., with a Sunday matinee on Nov. 14 at 3 p.m.

“I am excited to share these little-known operatic gems based on the short stories of Anton Chekhov. Chekhov wrote such timeless and entertaining stories about the perseverance of the human condition, and Walton and Wargo capture this rich essence with some beautiful and inspiring music,” said Daniel Ellis, stage director and academic professional in opera and theatre.

In an email to Ellis, Wargo said that “‘A Visit to the Country’ is a piece that is ‘very close to his heart’ and that he is ‘happy to have audiences hear this rare work once again.’”

Wargo, a native of Scranton, Pennsylvania, and graduate of the Eastman School of Music, has received grants to serve as composer-in-residence at the Skylight Opera Theatre in Milwaukee. With these grants, his opera “Ballymore,” based on Brian Friel’s play “Lovers,” premiered in 1999 and was recorded for PBS. Wargo’s opera “A Chekhov Trilogy” premiered by Chautauqua Opera in 1993. Wargo also serves as curator of the Sembrich Opera Museum in Bolton Landing on Lake George, New York, in summer. Wargo’s work is by arrangement with G. Schirmer Inc., publisher and copyright owner.

Chekhov’s one-act comedy, sometimes translated to English as “The Boor,” was inspired by the 1865 French play “Les Jurons de Cadillac” by Pierre Berton. The works share the conceit of a male “bear” being tamed by a woman. It was known by American audiences in an English translation, which premiered in London in 1911 and in the U.S. in 1915. Walton’s one act is by arrangement with Boosey & Hawkes Inc., o/b/o Oxford University Press.

Walton was born in Oldham, Lancashire, England, in 1902. “The Bear” is an opera in one act based on a comic vaudeville by Chekhov and premiered at Jubilee Hall at the Aldeburgh Festival in 1967. Both Chekhov’s play and Walton’s opera surprised their creators due to their warm critical reception.“I’ve managed to write a stupid vaudeville which, owing to the fact that it is stupid, is enjoying surprising success,” said Chekhov.

UGA Opera Theatre is directed by Frederick Burchinal, the Wyatt and Margaret Anderson Professor in the Arts, with stage direction by Ellis and vocal coaching by Kathryn Wright.

Tickets to the concert are $25 for adults for both performances and $3 for students on Friday night and $10 on Sunday with a valid ID. They can be purchased through the Performing Arts Center box office online, by calling 706-542-4400 or in person before the event. Live streaming will be available via music.uga.edu/live-streaming. If joining in person, the Hodgson School strongly encourages patrons to wear a mask inside the halls and public spaces.