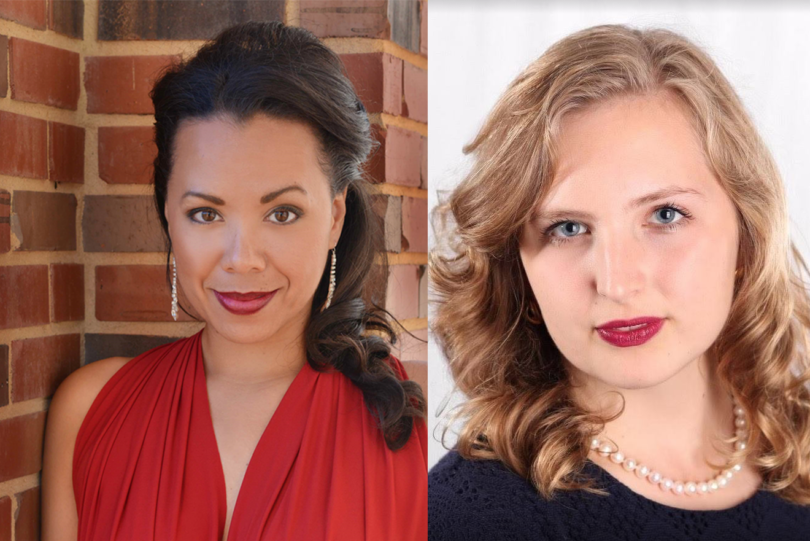 Diana Thompson, left, and Jaime Marie Webb will take on the role of Lucia in the UGA Opera Theatre’s production of Gaetano Donizetti’s Lucia di Lammermoor.

For its fall performance, the Hugh Hodgson School of Music UGA Opera Theatre will present to the Athens community for the first time Gaetano Donizetti’s Lucia di Lammermoor. One of the most famous dramatic operas in the Opera Theatre’s repertoire, Lucia di Lammermoor will be performed in collaboration with the UGA Symphony Orchestra and Hodgson Singers. Conducted by Mark Cedel, a semi-staged and costumed concert version of this masterpiece will be presented on Oct. 18 at 7:30 p.m. and Oct. 20 at 3 p.m. in Hodgson Hall at the Performing Arts Center.

Seven soloists of the Opera Theatre will be featured singing the leading roles with the Hodgson Singers directed by Daniel Bara, the Boyd UGA Foundation Professor of Choral Music. The title role of Lucia will be performed by Jaime Marie Webb, a Masters of Music student on Oct. 18 and onOct. 20 by Diana Thompson, a doctoral student in the Hodgson School.

For centuries, operas have often focused on the leading lady, the prima donna, as the center of attention and focal point of story, so much so that the names of these divas of theater and opera became synonymous with the operas such as Tosca, Carmen, Norma, La Traviata, Elektra, La Cenerentola (Cinderella), Madama Butterfly and Turandot, among others.

Hardly a one-woman show, with all characters and singers equally important to the impact of the story, Lucia di Lammermoor revolves around two rival and warring families, much like the Hatfields and the McCoys.

A love connection between Lucia and Edgardo, the head of the rival Ravenswood family, is complicated by her family’s plan to marry her off to a more “profitable” husband. As Lucia becomes a victim of her family’s greed and thirst for power, her destiny is sealed by her brother Enrico.

When Edgardo comes to the wedding in protest, he provokes Lucia to a state of mind that ends the opera with the wedding night murder of her new husband, Arturo. Her subsequent “mad scene” is the highlight of the opera.

“Lucia di Lammermoor has been at the top of the list as one of the most challenging operatic soprano roles that demands the singer present an instrument well developed and refined enough to express a range of deep emotions, long florid coloratura cadenzas, extreme high notes and realistic dramatic acting with a touch of madness to finish,” said ­Frederick Burchinal, the Wyatt and Margaret Anderson Professor in the Arts and director of UGA Opera Theatre, along with opera coach Kathryn Wright.

Tickets for the fall opera are $20 for adults and $3 for students and are available through the ­Performing Arts Center box office, online at pac.uga.edu or by calling 706-542-4400. Streaming will be available for the Oct. 18 performance at music.uga.edu/live-streaming.