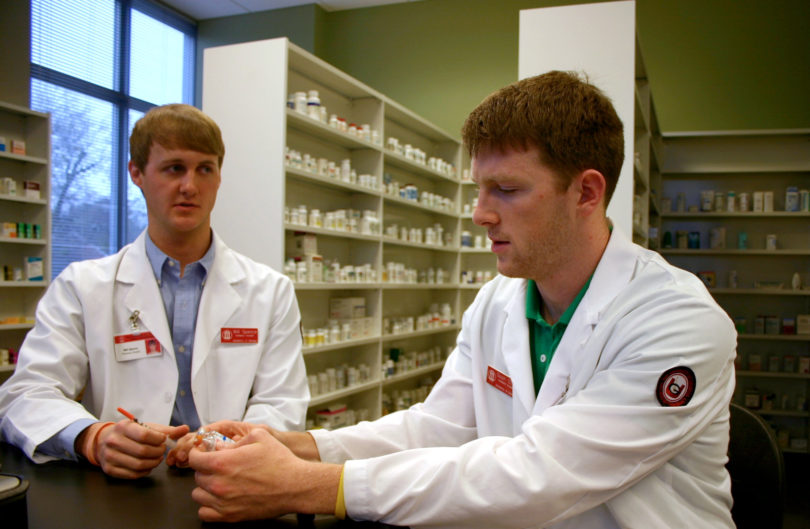 Pharmacy students Sean Szad of Richmond Hill and Will Spence of Perry were recently chosen for the U.S. Navy's Health Services Collegiate Program Medical Service Corps—a selective program that accepts only five recipients each year from applicants across the country.

Athens, Ga. – While most University of Georgia students working toward their doctor of pharmacy degrees begin job-hunting toward the end of the program’s third year, second-year students Sean Szad of Richmond Hill and Will Spence of Perry are no longer worried about finding a job.

Szad and Spence were chosen for the U.S. Navy’s Health Services Collegiate Program Medical Service Corps—a selective program that this year accepted only five recipients from applicants across the country.

The two will be sworn in as petty officers on May 1 and will be paid according to their rank. While completing their third and fourth years of school, they also will begin receiving Navy benefits—such as medical care and commissary shopping. Once they have graduated and passed the licensing exam, they will be commissioned as lieutenants and ordered to Officer Development School in Newport, R.I., for five weeks of training before being sent to their first duty station.

“The guys did all the little things that made them standouts,” said their recruiter Lt. Paul Jordan. “It’s a very competitive program. To have two of the five come from the same school is a huge accomplishment.”

One of the “little things” that Szad and Spence did was pay a visit to Naval Air Station Jacksonville during winter break.

“I loved the sense of teamwork in the healthcare community on base,” Szad said. “Everything seemed very cohesive and efficient, with opportunity for collaboration and communication to ensure optimal patient care.”

Spence’s reaction was similar. “We had the chance to speak with the pharmacists and hear the reasons for staying in the Navy and why they loved Navy pharmacy as compared to other sectors,” he said. “The overwhelming theme behind each of these interviews was how extremely satisfied each of these pharmacists was with their career choice.”

Once their Officer Development School training is complete, the pair will most likely part ways. Szad’s goal is to one day be stationed at Pearl Harbor, while Spence would like to work at a naval hospital in San Diego or Rota, Spain.

“Without reservation I welcome Will and Sean into the Health Services Collegiate Program,” Jordan said. “I am proud to serve with them.”