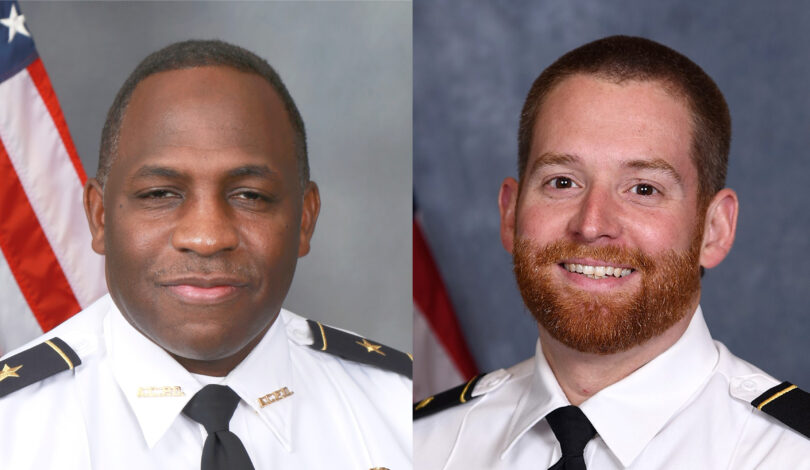 From left, Jeff Clark joins the University of Georgia Police Department its first Deputy Chief for Engagement, Training, and Standards. Adam Fouche has been promoted to deputy chief. (Submitted photos)

Jeff Clark joined the department on March 8 as UGA’s first Deputy Chief for Engagement, Training, and Standards. Clark previously served for 24 years with the Athens-Clarke County Police Department, where he was most recently a deputy chief.

“We are exceptionally excited that Deputy Chief Clark has joined the Police Department team in this newly created position,” said Chief Dan Silk. “He brings a wealth of experience in Athens, and a community-centered mindset that meshes perfectly with the UGA Police Department’s philosophy and our community’s needs.”

As Deputy Chief for Engagement, Training and Standards, Clark will focus on harnessing existing UGA and local community outreach in a concerted effort to emphasize alignment between community needs and expectations, best practices in policing, and departmental strategies and goals. Before joining the ACCPD, he was a staff sergeant in the U.S. Army. He has an undergraduate degree in criminal justice, a graduate degree in public safety administration and attended the prestigious FBI National Academy.

Adam Fouche has been promoted to deputy chief and is responsible for the Bureau of Field Operations and the Criminal Investigation Division. Before becoming a police officer in 2004, Fouche was a journalist and earned his undergraduate degree from the Grady College of Journalism and Mass Communication. Fouche has a graduate degree in public safety administration and completed the Northwestern University School of Police Staff and Command.

Fouche replaces former Deputy Chief Bernard Thomas, who retired in December after serving nearly 29 years with the University System of Georgia, the majority of that at UGA.

“Bernard is certainly missed, and we all owe him a debt of gratitude for his many years of selfless service to the UGA community,” Silk said.

Fouche and Clark join Wes Huff, who has served as deputy chief since 2018. Huff has worked at the UGA Police Department for nearly 27 years and manages administrative and financial affairs. He earned an undergraduate degree in criminal justice and a graduate degree in human resource and organizational development, both from UGA. He has also completed both the FBI National Academy and the Northwestern University School of Police Staff and Command.

In addition, Michael Pennington has been promoted to the rank of captain, replacing Fouche. He leads the Bureau of Field Operations, which includes all uniformed patrol personnel. Pennington has worked at UGA since 2001 and started his career in the Division of Student Affairs before becoming a police officer in 2008. Pennington earned undergraduate degrees in political science and mass communications, and his M.Ed. and Ph.D. in College Student Affairs Administration from UGA.

“The University of Georgia Police Department is committed to protecting and providing professional and dedicated services to the university community and we do so with courage, dependability and integrity,” Silk said.