The Day of the Dead is a festive Mexican holiday that celebrates departed loved ones and the joy of being alive. Few bands exemplify musical exuberance like the Villalobos Brothers, three singing and songwriting violinists from Veracruz, Mexico. They will make their UGA Presents debut on the Day of the Dead, Nov. 2, at 7:30 p.m. at Hodgson Concert Hall. 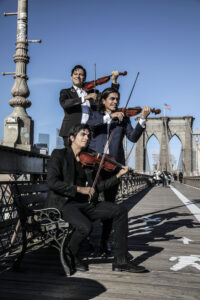 The Villalobos Brothers will make their UGA Presents debut on Nov. 2, at 7:30 p.m. at Hodgson Concert Hall. (Submitted photo)

Alberto, Ernesto and Luis Villalobos studied violin at conservatories in Europe and the U.S. before turning their energies to the music of their homeland. “Our grandmother was a folk musician,” Ernesto Villalobos told NPR in 2019. “She was able to pass this love for traditional Mexican music, and to invite us to open the world beyond the classical music that we were learning.”

Fusing Mexican music, classical music, jazz and rock, the band has made two albums. The first, 2012’s “Aliens of Extraordinary Ability,” was named for the classification on their artist visas when coming to the U.S. “Somos” (We Are), from 2019, finds the band taking an expansive approach. “WE ARE citizens of the world,” the band says on its website. “We believe in music as a positive, necessary and inexhaustible healing force, and we live to share our creations. WE ARE not only troubadours of love and brotherhood, but also activists speaking against injustice.”

The ensemble’s virtuosic performances have delighted audiences throughout Latin America, India, Russia, Canada and more than 30 states across the U.S. They have performed at historic venues and events including Carnegie Hall, Lincoln Center, the Latin Grammy Awards, the Montreal Jazz Festival, the 60th anniversary of the United Nations, the 66th FIFA Congress in Mexico City, the Blue Note Jazz Festival and the Apollo Theatre.

In 2018, the group joined forces with Arturo O’Farrill and the Afro-Latin Jazz Orchestra for the Fandango at the Wall project. This ambitious undertaking, produced by Kabir Sehgal, united legendary international musicians for a live concert at the Tijuana-San Diego border wall, which resulted in a live album and a documentary film released by HBO Max in 2019.

The Villalobos Brothers are just one of the international groups on the UGA Presents calendar. The South African Soweto Gospel Choir appears in Hodgson Concert Hall on Nov. 15 with a program titled “Hope: It’s been a Long Time Coming,” which traces the American civil rights movement and the fight against apartheid. On Jan. 23, the Lviv National Philharmonic Orchestra of Ukraine brings Dvorak’s “New World” Symphony to Athens.