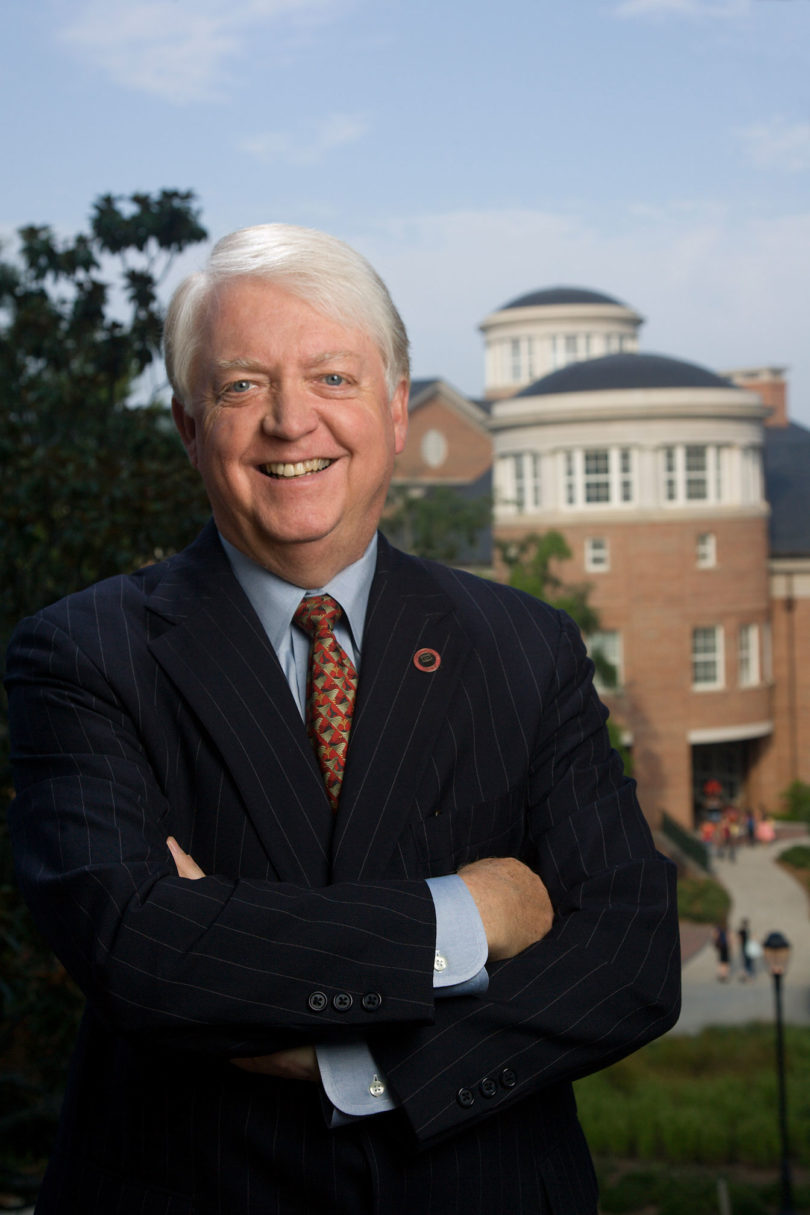 Athens, Ga. – University of Georgia President Michael F. Adams informed the campus today that he will step down as president at the conclusion of the next fiscal year. At the end of his 16 years in office on June 30, 2013, Adams will stand fifth in length of service among the university’s 21 presidents, tied with founding president Abraham Baldwin.

“There comes a time when it is appropriate to step aside to let others continue the work, and that time has come for me,” said Adams. “My love will always be deep for the University of Georgia, where I have spent the most productive years of my career. I will be invigorated in the coming year in working to assure that UGA remains well positioned for the future, both short term and long term.”

With the Board of Regents of the University System of Georgia scheduled to take action next week on presidential appointments for the coming year, Adams said that, pending reappointment, he would make the coming year his last as president.

Since Adams took office in 1997, the University of Georgia has risen dramatically in many key indicators: academic achievement, faculty strength, student quality, enrollment, fundraising and the physical plant. The university has been recognized as one of the nation’s top 20 public research universities for eight out of the past 10 years by U.S. News & World Report.

“I am proud of where the university is. It is in excellent shape,” Adams said. “But now is not the time to waver in our dedication to moving her forward. We still need faculty and staff salary support and additional facilities for students, in particular the Science Learning Center planned for South Campus. And a key challenge is the coming capital campaign. I will spend the next year preparing for a capital campaign that my successor can build upon to propel this historic and dynamic institution into the future.”

Adams said he intends to stay engaged with the university and the Athens community after his presidency, with an eye toward teaching and writing. “Mary and I love this place, we love this community and are really looking forward to a new level of engagement with both the campus and the town,” he said.

“I have enjoyed broad support from the Board of Regents of the University System of Georgia for 15 years,” Adams said. “I want to especially thank Chancellor Steve Portch, who offered me this job on behalf of the regents, who were chaired at the time by the late Tom Allgood, and the search committee, which was chaired by Regent Don Leebern. I am also grateful to my friend, Dan Amos, who represented the University of Georgia Foundation on the search committee, and to Dr. Betty Whitten, who was the chair of the executive committee of University Council and represented the faculty in the search.”

Adams was named the 21st president of the University of Georgia on June 11, 1997, following nine years as president of Centre College in Kentucky, and next year will complete his 25th year as a college or university president. He is among America’s longest-serving and best-known university presidents. A widely-respected figure in higher education, he is the only person ever to be elected by his peers to head each of four leading national organizations: the National Association of Independent Colleges and Universities, the Association of Public and Land-Grant Universities, the American Council on Education and the National College Athletic Association’s Executive Committee.

Adams is a specialist in political communication and higher education administration and has written professionally in both areas. He has held senior positions in state and national government-as chief of staff to former U.S. Sen. Howard Baker, whom Adams considers one of his greatest mentors. He also served two years in the administration of Tennessee Gov. Lamar Alexander.

Either personally or professionally on behalf of the university, he has received numerous awards in higher education, including the Knight Foundation Award for Presidential Leadership, the Pioneer Award for Leadership in Civil Rights and the James T. Rogers Award, the highest honor bestowed by the Southern Association of Colleges and Schools. He is the recipient of the Governor’s Award in the Humanities from the Georgia Endowment for the Humanities. For 10 consecutive years, Georgia Trend magazine has included Adams on its list of the 100 Most Influential Georgians.

Academically, the university’s stature has never been higher. Five new colleges or schools have been established during Adams’ presidency: the School of Public and International Affairs (2001), the College of Environment and Design (2001), the College of Public Health (2005), the Eugene P. Odum School of Ecology (2007) and the College of Engineering (2012). In 2010, a partnership with the then-Medical College of Georgia led to medical degree education in Athens. The medical partnership and UGA’s College of Public Health will move to the newly acquired UGA Health Sciences Campus on the site of the former U.S. Navy Supply Corps School this fall.

The university now ranks fourth in the nation in the number of students who participate in short-term study abroad programs, as Adams led the establishment of permanent year-round international residential sites in Oxford, England; Cortona, Italy; and San Luis, Costa Rica. Likewise, the university’s reach into the state expanded with additional academic programs at campuses in Gwinnett County, Griffin, Tifton and Buckhead.

UGA’s physical campus has been transformed since he took office, with more than $1 billion in new construction, renovation and infrastructure and 6.2 million square feet of new space completed. The Zell B. Miller Learning Center, which transformed the academic life of students on campus, opened in fall 2003. The Paul D. Coverdell Center for Biomedical and Health Sciences was dedicated in 2006. The East Campus Village, served by the Joe Frank Harris Dining Commons, both of which opened in 2004, added space for more than 1,200 students to help meet demand for on-campus living, and another 500-bed residence hall opened in 2010. The new home of the Lamar Dodd School of Art, also on East Campus, opened in 2008; a College of Pharmacy addition was occupied in 2009; and the expansion of the Georgia Museum of Art was completed in 2011. Also in 2009, a major addition to the William B. Tate Student Center was added to the campus. In 2011, a Butts-Mehre Heritage Hall expansion was completed. The landmark Richard B. Russell Building Special Collections Libraries opened in early 2012, and ground is to be broken this fall for a new College of Veterinary Medicine teaching hospital.

Under Adams’ leadership, University of Georgia’s enrollment has grown from 29,693 in 1997 to about 35,000 students today, while becoming the most selective in its history and attaining its highest national rankings. Adams’ signature appears on some 110,000 degrees earned by almost half of UGA’s living alumni. Widely recognized for his fundraising abilities, Adams saw more private funds raised to support the university during his term than during the institution’s entire previous history.

“No one knows better than I that none of these were personal accomplishments, but were the accomplishments of a strong and dedicated team,” Adams said. “Indeed, I consider putting that team together and the quality of the people we have brought to this place to be my single greatest accomplishment. In other words, nothing that has been accomplished would have occurred without the full support of a great many people.”

Adams continued, “I cannot overly express how much I appreciate the support I have received from so many individuals in the administration, the faculty, the staff, the students, the alumni, and from the people of Georgia who love this place. These people make the presidency of UGA one of the best jobs in America. I continue to believe that the people of this state deserve a flagship every bit as good as do the people of California or Michigan or North Carolina. Together, we have made great progress in that regard, and I thank all of you for the opportunity to serve in this capacity.”

A native of Alabama, Adams is a graduate of the public schools of Georgia and Tennessee, being named the most outstanding graduate of Chattanooga High School in 1966. At Lipscomb College, he met Mary Lynn Ethridge in a history class, and they have been married for 43 years. They are the parents of two sons, David and Taylor, both of whom are married to UGA alumnae, and are very proud of their two granddaughters, Campbell and Tucker.

To view the announcement, see http://www.youtube.com/watch?v=gZ17K9kUEyI.