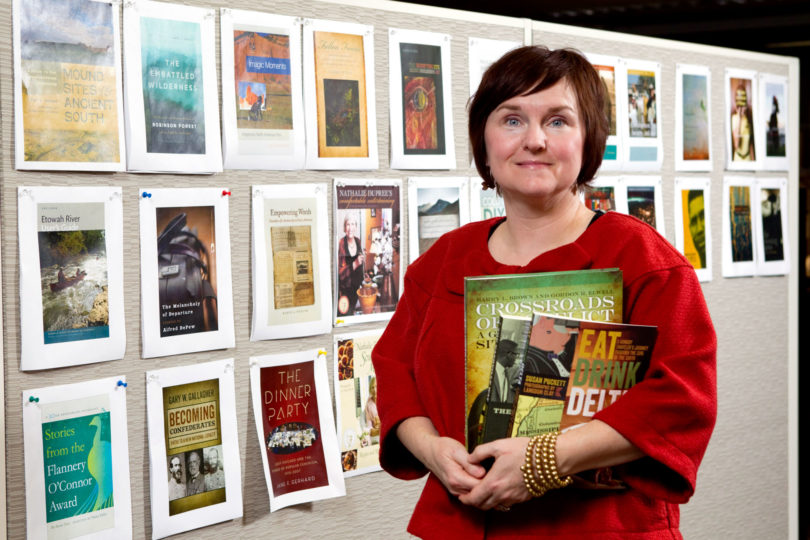 Since becoming director of the UGA Press last July

There’s no shortage of change taking place in the publishing world as e-book sales continue to grow and the question of exactly how readers will buy books in the future remains uncertain.

That’s just as true for the academic side of publishing as it is for the commercial.

In some major ways, however, little has changed in how the UGA Press has gone about its business since 1938. The press, celebrating its 75th anniversary this year, continues a strong commitment to its rigorous peer review process overseen by a faculty editorial board.

While the oldest and largest book publisher in the state holds tight to its proud legacy, it also is embracing the technological changes that are transforming the publishing world and expanding its range of subject matter.

Since its founding, the UGA Press has been publishing wide-ranging works of scholarship and literature-supporting the university’s position as a major research and teaching institution. The press also has built one of the foremost lists on Georgia and the South.

Recently taking the helm of the UGA Press is new director Lisa Bayer, who joined the press in July 2012. A former marketing director and regional trade editor at the University of Illinois Press and a 20-year veteran of scholarly publishing, Bayer said the enticement to come to Athens was undeniable.

“The University of Georgia Press has a tremendous reputation both on the campus and in the state, but also within the university press and academic communities,” she said. “This press is doing all of the right things.”

Part of the press’s strategy, led by Mick Gusinde-Duffy, its new editor-in-chief, is to carve out new areas that reflect shifting trends in scholarship. These areas include security studies and international affairs; interdisciplinary environmental studies; American history since 1970; and new treatments of the American Civil War.

The list expansion, Bayer explained, is driven in part by the expertise of UGA faculty and access to research centers such as the Center for International Trade and Security and the Willson Center for Humanities and Arts. All of this, Bayer said, was done “while maintaining the core strengths we have cultivated for decades.”

At the same time the press is expanding its subject matter, it also is diversifying the way its readers receive content.

Already, the UGA Press has made the shift toward offering readers e-books for Nook, Kindle and Android tablets. The press is partnering in the University Press Content Consortium and Books@JSTOR, aggregators that distribute e-book collections to libraries worldwide.

Of the more than 1,500 books in print, more than 500 are available electronically. Most new books the press publishes are available in both print and e-book formats, though for now the hard copies are still by far the most popular. E-books accounted for only about 3 percent of sales in fiscal 2012. Bayer expects that number to exceed 10 percent this year.

As the UGA Press embraces new areas of scholarship and new ways of reading while embracing the strengths of its past, the future is not so uncertain. Another 75 years of strong scholarly publishing appear to be on the horizon.

“We know where we need to be,” Bayer said, “and we’re ready for the next chapter.”

During its yearlong anniversary celebration, the UGA Press will participate in a variety of events, including the Savannah Book Festival, the Decatur Book Festival Aug. 31-Sept. 1, the Georgia Literary Festival Nov. 9-10 and the Spotlight on the Arts at UGA festival in the fall.

On campus, a display of all of the Flannery O’Connor Award winners will be available for viewing on the third floor of the main library on April 18. The press also will have a display in the main library’s lobby for the month of April.

Artist Philip Juras, a UGA alumnus, has loaned three of his landscape paintings to the press. They will be exhibited in the lobby of the press’s offices in UGA’s main library through June.

In the fall, the press will hold a Dirty Book Sale on campus. More details and other events will be announced as they become finalized.