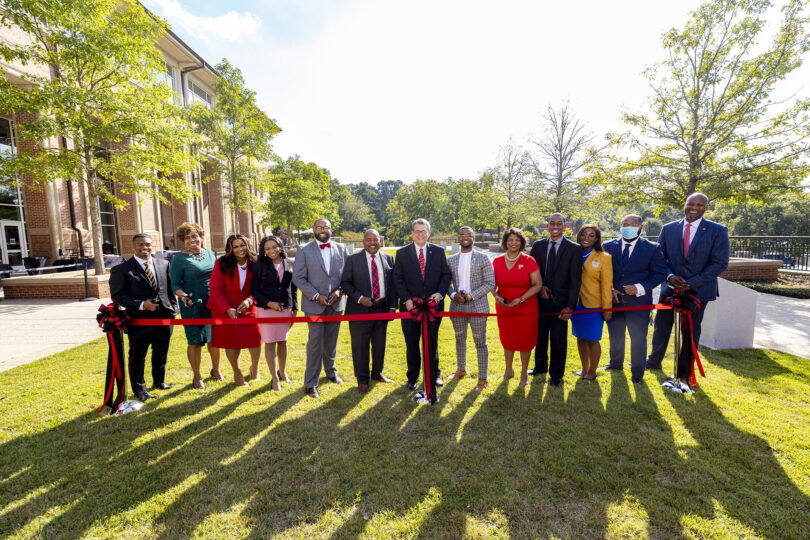 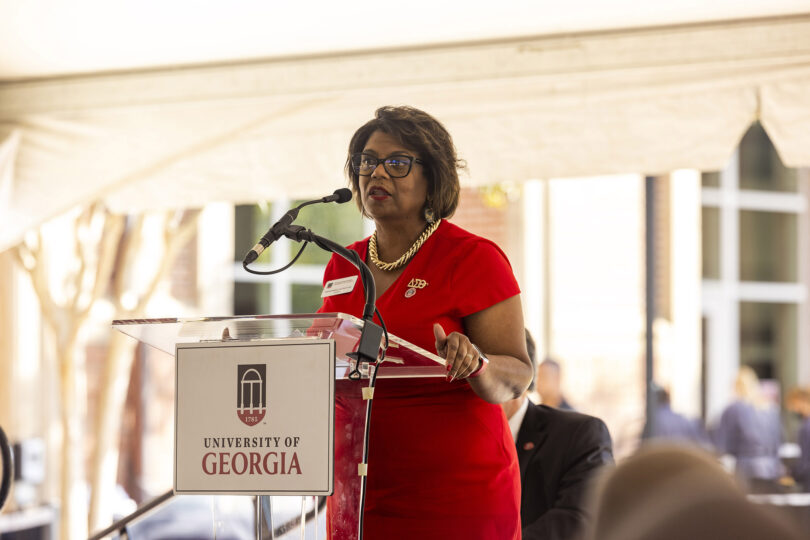 Yvette Daniels, director of university relations for the Georgia Department of Public Health and the first Black woman president of the UGA Alumni Association, speaks at the dedication ceremony honoring the nine member organizations of the NPHC. (Photo by Dorothy Kozlowski/UGA) 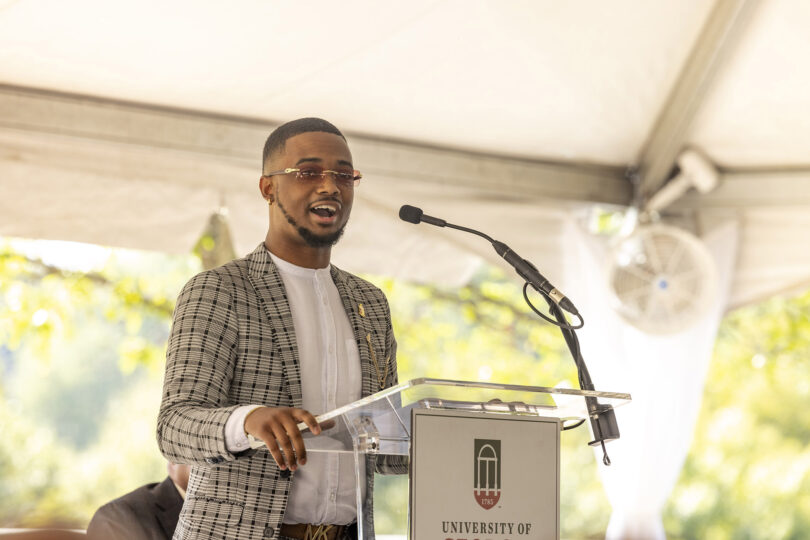 Justin Nixon, a 2020 UGA graduate who served two terms as president of the NPHC and is now a first-year student in UGA’s School of Law, speaks at the dedication ceremony honoring the nine member organizations of the NPHC. (Photo by Dorothy Kozlowski/UGA) 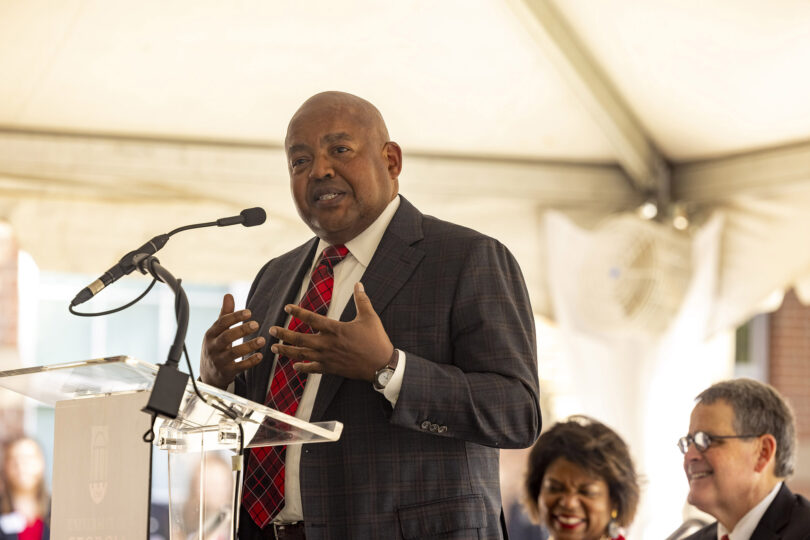 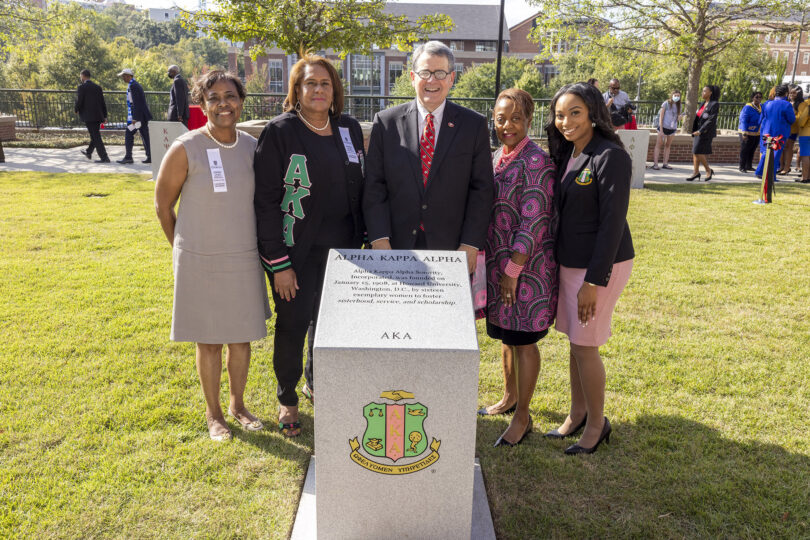 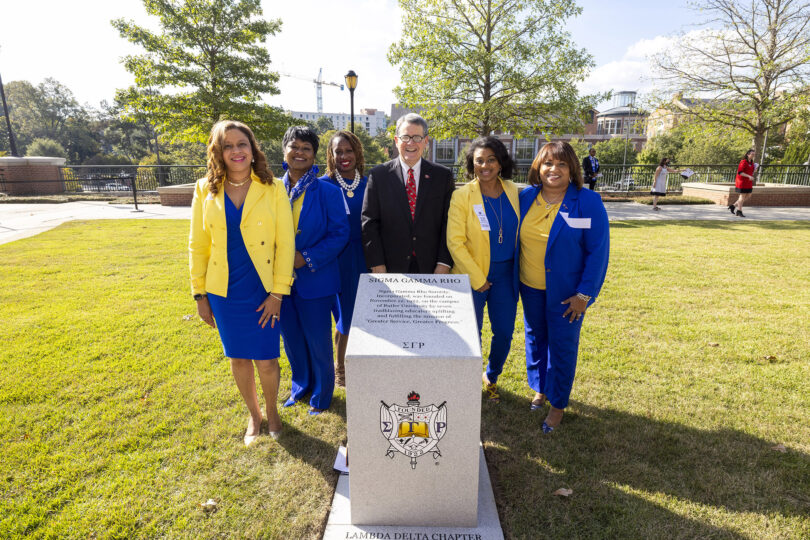 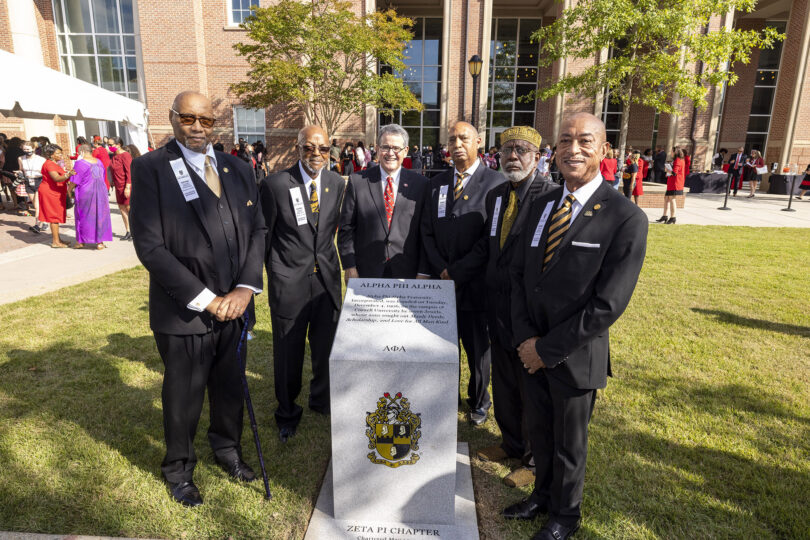 The University of Georgia held a commemoration ceremony on Friday, Oct. 15, to honor nine historically Black fraternities and sororities on the West Lawn of the Tate Student Center, where markers were installed to recognize the National Pan-Hellenic Council member organizations.

UGA President Jere W. Morehead approved the installation of the markers at the recommendation of the Presidential Task Force on Race, Ethnicity, and Community.

“These markers represent the university’s pride in the students and alumni who belong to these distinguished fraternities and sororities and our ongoing commitment to diversity, equity, inclusion and belonging,” Morehead said at the dedication ceremony. “These historically Black fraternities and sororities have been vitally important to our students and our community, and I am pleased that they are getting this well-deserved recognition.”

Other speakers at the event included Justin Nixon, a 2020 UGA graduate who served two terms as president of the NPHC; Yvette Daniels, director of university relations for the Georgia Department of Public Health and the first Black woman president of the UGA Alumni Association; and Victor K. Wilson, vice president for student affairs at UGA.

A crowd of spectators representing students, faculty, staff, alumni and community members gathered for the ceremony and to tour the marker installation. The markers, which are made of granite, bear the name and official seal of each fraternity or sorority, the date on which it was chartered and a brief history of the organization.

Established in 1930, the primary purpose of the NPHC remains community awareness and action through educational, economic, and cultural service activities. Throughout their history, these organizations have helped to build community among Black students at colleges and universities across the country.

“Today is significant. It’s historic,” said Daniels, a member of Delta Sigma Theta Sorority, Inc., who earned both her bachelor’s degree and Juris Doctor from UGA. “This permanent site recognizing each of what I’ve always called the ‘Divine Nine’ says that we are an integral part of the University of Georgia, and that we belong here, that our voice is heard here, and that we are seen here at the university.”

In May 1969, the Zeta Pi Chapter of Alpha Phi Alpha Fraternity, Inc. became the first NPHC member organization to establish a charter at the University of Georgia. This was followed shortly thereafter by the Zeta Psi Chapter of Delta Sigma Theta Sorority, Inc. in November 1969. As the first two NPHC organizations on the UGA campus, they are also the fraternity and sorority, respectively, of the late Dr. Hamilton E. Holmes and Charlayne Hunter-Gault, the first two Black students at UGA. Mary Frances Early, the first Black graduate of UGA, is a member of Alpha Kappa Alpha Sorority, Inc.

“Our foremothers and forefathers have waited for this day, and we experience now the fruits of their labors,” said Nixon, who is a member of Kappa Alpha Psi Fraternity, Inc. and a first-year student in UGA’s School of Law. “They would be proud of who we are, what we’ve accomplished, and the monuments that have been erected.”

Similar projects have been launched at numerous other institutions including the University of Florida, University of Tennessee and the University of North Carolina – Chapel Hill. The Office of University Architects managed the project, which was completed in spring 2021. Although the markers were recommended by the Presidential Task Force on Race, Ethnicity, and Community, other members of the University community have been involved including students, faculty, staff and alumni.