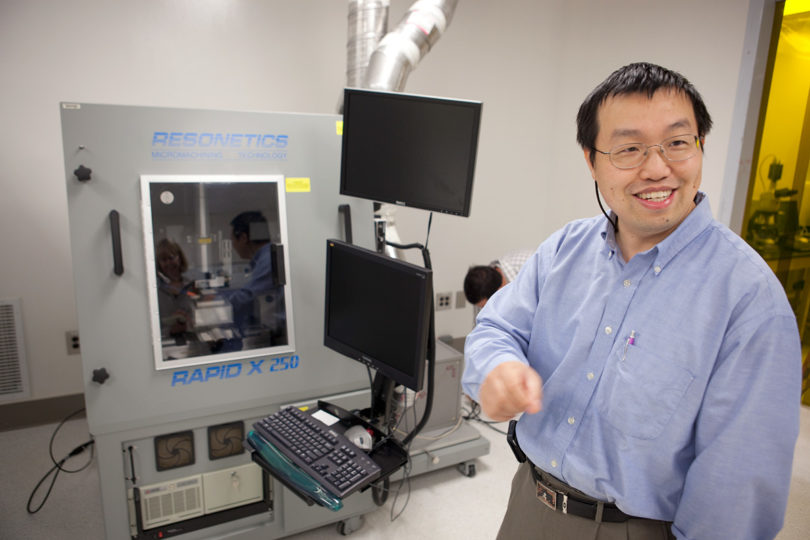 Their discovery may be used to help clinicians diagnose certain cancers such as leukemia and lymphoma. It can detect the presence of viruses in tissue. And it can be used for a variety of forensic applications, such as paternity testing or crime scene DNA analysis.

Led by Yiping Zhao, professor of physics in the UGA Franklin College of Arts and Sciences and director of the university’s Nanoscale Science and Engineering Center, and Ralph Tripp, Georgia Research Alliance Eminent Scholar in the UGA College of Veterinary Medicine, the researchers proved the efficacy of their new DNA analysis method by experimenting with short strands of RNA called microRNA. While their approach may be used on all forms of DNA and RNA, researchers focused on microRNA because it holds great promise as a target for future therapeutics.

“MicroRNA-based therapies are under way for many diseases, but progress is confounded by the inherent difficulties in detecting small RNAs with standard techniques,” Tripp said.

Their experiments used a well-established technique known as surface enhanced Raman spectroscopy, or SERS, which allows scientists to detect specific DNA and RNA sequences by shooting a laser at a sample and measuring the changes in light frequency as it scatters. Zhao and his team placed their sample on top of a special film made of silver nanorods that are 1,000 times finer than the width of a human hair. The nanorods amplify the signal and improve the accuracy of their measurements.

Their research was published recently in the Journal of the American Chemical Society. In their paper the researchers describe how their detection technique identifies a critical process known as nucleic acid hybridization.

DNA is made up of two strands that wind into the famous corkscrew appearance known as the double helix. To identify an area of interest, researchers heat a mixture of DNA until the strands separate. Then, a special marker inside the solution bonds, or hybridizes, with the segment of the DNA or RNA researchers want to study.

With existing testing methods, researchers must mark the DNA with a special fluorescent label that allows them to visually see that the segments they want to study have hybridized, which increases the cost and complexity of the experiment. The new method developed at UGA requires no special marker at all.

“We show in our paper that this new approach is a simple and valid method for direct, label-free microRNA detection,” Tripp said.

In addition to lowering costs and improving the accuracy of genomic testing, Zhao and his team also hope to make the technology more mobile. Current detection methods require a full laboratory, and many researchers must send their samples away and wait several weeks to receive their results.

“The motivation of the whole field is to miniaturize this sort of detection technology,” said study co-author Justin Abell, a doctoral student in the UGA College of Engineering. “We want to take it directly to the source and get our readout at a point of care.”

Ultimately, the researchers hope that their technique will become a new standard for DNA and RNA testing both in the research laboratory and in the field.

“If we can develop this further, we can replace any test used to detect DNA or RNA with our technique,” Zhao said.