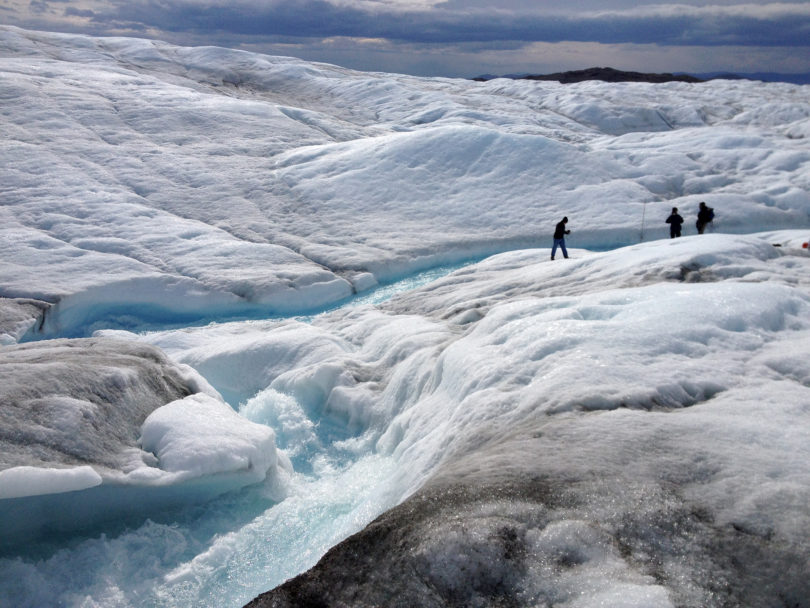 Athens, Ga. – Over the past several decades, scientists have observed a significant increase in the melting of glacial land ice on the island of Greenland, spurring concerns about global sea level rise and the long-term effects of atmospheric warming. What has been less clear, however, is what happens to this meltwater once it enters the ocean.

Now, a team of researchers led by faculty at the University of Georgia has discovered the fate of much of the freshwater that pours into the surrounding oceans as the Greenland ice sheet melts every summer. They published their findings today in the journal Nature Geoscience.

“Understanding the fate of meltwater is important, because research has shown that it can carry a variety of nutrients, which may impact biological production in the ocean,” said study co-author Renato Castelao, an associate professor of marine sciences in UGA’s Franklin College of Arts and Sciences. “There is also evidence that large freshwater inputs could alter ocean currents and affect the normal formation of sea ice.”

The researchers created a simulation that tracks meltwater runoff under a variety of atmospheric conditions, and they were surprised to discover that most of the meltwater found off the west coast of Greenland actually originated from ice on the east coast.

“Meltwater from Greenland is directed by the surrounding ocean currents, but its fate depends on when and where the runoff occurs and the wind fields driving ocean currents,” said study co-author Thomas Mote, Distinguished Research Professor of Geography at UGA.

According to the model, wind and ocean currents often transport meltwater around the southern tip of Greenland on a westward journey that can take upward of 60 days. After rounding the tip, the meltwater is largely deposited into the Labrador Sea, an arm of the Atlantic between Canada’s Labrador Peninsula and the east coast of Greenland.

Meltwater originating from the west coast of Greenland, on the other hand, is often kept pinned to the coastline by strong winds, which push it northward toward Baffin Bay.

This isn’t always how meltwater from the Greenland ice sheet disperses, as shifts in the prevailing winds can produce very different effects. But scientists must be aware of these shifts in order to fully understand how meltwater will affect the environment, Castelao said.

“The meltwater that comes from the east coast could have different qualities from the meltwater on the west coast, including different nutrient compositions,” he said. “We need to take the origins of this meltwater into account when we study the effects of ice sheet melt, as it could impact the oceans differently depending on where it comes from.”

And this is a problem that is only going to get worse, said Castelao, citing scientific models that suggest the amount of meltwater runoff from Greenland could more than double before the end of this century.

“We need to pay careful attention to where melt and runoff is occurring and how it interacts with surrounding ocean currents, in addition to measuring the total amount of melt,” said Mote.

Their study, “Oceanic transport of surface meltwater from the southern Greenland ice sheet,” is available at http://www.nature.com/ngeo/journal/vaop/ncurrent/full/ngeo2708.html.