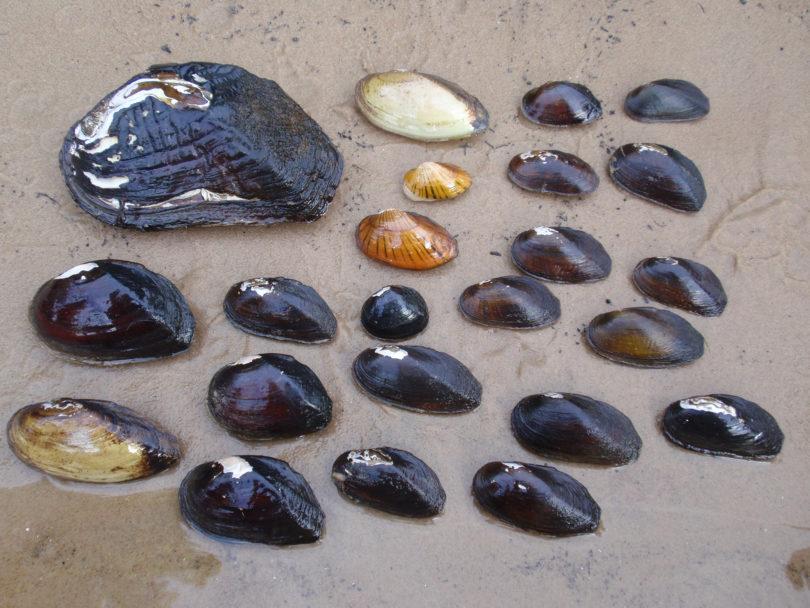 At top left is a purple bankclimber mussel with other mussel species samples from the Flint River.

Athens, Ga. – Mussel researchers have long been stymied in their efforts to study the reproductive habits of mussels, the often-overlooked mollusks that live in rivers and filter the water by removing contaminants and balancing bacteria levels. Identification of the fish species mussels use as hosts can be difficult, but University of Georgia researchers have done just that with the federally threatened purple bankclimber mussel.

But they’ve also discovered something even more troubling. Not only are these imperiled mussels relying on a fish species that also is endangered, the two are separated by a dam built six decades ago.

The reproductive cycle of mussels is quite complicated. To procreate, mussels need fish, because mussel larvae must attach to fish gills for a brief period to be able to grow into adults. But mussels often need a specific species of fish to act as hosts to their larvae. And in the case of the purple bankclimber, that fish is the gulf sturgeon, a find that UGA researchers recently published in the journal Freshwater Science.

The imperiled status and physical separation of these species definitely complicate recovery plans, said Robert Bringolf, an assistant professor of fish biology at the UGA Warnell School of Forestry and Natural Resources.

“Dams are known to fragment habitats and have adverse effects on river ecosystems, but this situation unequivocally illustrates the need to re-establish connectivity and natural flow regimes in river systems,” Bringolf said. “The fate of these mussels and others often rests with the fate of their host fish.”

Jim Woodruff Dam, which created Lake Seminole on the Georgia-Florida border, was built in 1952 and has blocked upstream movement of the gulf sturgeon to the Flint River where they used to spawn—and where the mussels were historically found in high numbers.

Bringolf and Doug Peterson, an associate professor of fisheries in the Warnell School, performed host fish trials with doctoral student Andrea Fritts in an effort to identify the fish preferred by purple bankclimbers, which are native to the Apalachicola-Chattahoochee-Flint River basin in Georgia, Alabama and Florida.

In the absence of the gulf sturgeon, the Warnell team discovered that purple bankclimbers have been able to use other fish as hosts, but with far less success. Darters also worked as hosts for the mussels, but Fritts said one adult sturgeon may be equivalent to nearly 1,000 darters when it comes to the ability to produce juvenile mussels.

Purple bankclimbers were added to the threatened list in 1998 due to reductions in population size and range. Specific causes for species declines are not always well understood, but many mussel populations have plummeted due to habitat loss and degradation. Poor land use practices and point-source discharges have resulted in sedimentation and contaminants in the Apalachicola-Chattahoochee-Flint River basin. In addition, water withdrawal and dams have altered the natural flows required by mussels. The Warnell team’s work indicates the loss of gulf sturgeon appears to be a key factor in the declines as well.

Gulf sturgeon were placed on the endangered species list in 1991, largely because of declining population size and range caused by habitat loss and altered river flows due to dams. The construction of Jim Woodruff Dam resulted in a loss of approximately 74 percent of the historic spawning range for sturgeon and other anadromous fish—which must move between the ocean and rivers to reproduce—in the Flint and Chattahoochee rivers.

Approximately 300 species of mussels occur in the U.S., and 125 are in Georgia. Many mussel species require specific fish species as hosts.

A typical way for a mussel to reproduce, Fritts explained, is to release their larvae—called glochidia—into the water column, bound in mucus. These glochidia, which are about the size of a grain of sand, then pass through the mouths and gills of fish and snap onto the gills of the correct host. Fish tissue creates a capsule around the glochidia for a period of two to three weeks, when the glochidia develops into a juvenile mussel with a foot, gills, muscles and a digestive tract. Juveniles then detach from the fish gills, fall to the river bottom and eventually grow into adult mussels.

Identifying gulf sturgeon as the fish host for purple bankclimbers is an important discovery, said Peterson, and knowing about this connection will help guide plans to help them recover.

Peterson and Bringolf are looking at the potential for moving some adult gulf sturgeon above the dam and tracking them to see if they can navigate the reservoir section of Lake Seminole to reach their native spawning grounds in the sections of the Flint River.

“Fish passage at Jim Woodruff Dam has the potential to create one of the greatest success stories to date in ecosystem recovery,” said Peterson.

Moving the sturgeon may begin in 2014 with $70,000 in funding from the U.S. Fish and Wildlife Service and the Nature Conservancy. Peterson said the project likely will involve moving 10 sturgeon initially.

Bringolf’s lab will continue to investigate other mussels that may depend on the gulf sturgeon and other anadromous fish in the Apalachicola-Chattahoochee-Flint River basin such as Alabama shad and gulf striped bass.