He’d been commercial fishing off the coast of Darien, about 50 miles south of Savannah, since he was 12, and his decades of shrimping told him the industry was in trouble. Again.

First, it was the regulations requiring specific gear, mandating licenses, and prohibiting trawling in the sound. All reasonable and arguably needed restrictions, but they cost fishermen like Gale not only time but buckets of money. 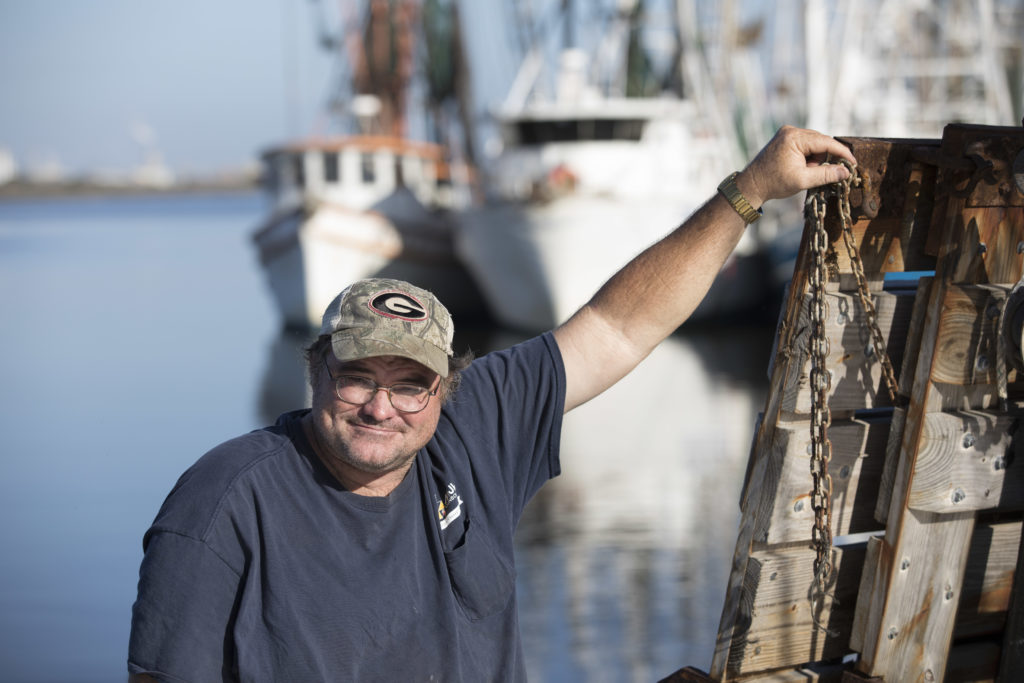 Longtime Georgia shrimper Wynn Gale first noticed something wrong with his catch in the 1990s. (Photo by Peter Frey.)

Then came the mounting costs of repairing crumbling equipment.

The never-ending battle to find experienced and trustworthy crew in the aging industry.

Not to mention the younger generation leaving the coast in waves to find more stable office jobs.

But this time, off the coast of Georgia in the 1990s, there weren’t as many shrimp to catch, and the ones Gale and other commercial fishermen were pouring onto the decks of their boats had something wrong with them. They weren’t flopping around like normal; in fact, they barely moved. And their gills were black, a stark contrast to the milky clear color of Georgia’s famously sweet white shrimp.

“You could go out there and drag around all day for five pounds of shrimp,” Gale recalls. “Every week, it got worse and worse. It went from 10 percent showing up with black gill to a quarter to a third to a half. We missed five days to have the boat motor repaired, and when we went back out there—zero shrimp. It’s like they all just died or disappeared. Gone.”

Gale gave up, docked the boat, and went off to a temporary construction job. A season that typically runs from June through January, shrimping season was over. It was only October.

Gale wasn’t alone in thinking the shrimp he was pulling in didn’t look healthy.

As early as the late 1980s, fishermen up and down the Georgia and Carolina coasts began complaining about smaller catches and saying the shrimp they did catch were lethargic on deck. The Georgia Department of Natural Resources (DNR) would officially record the first instance of what would become known as black gill in 1996 when the condition was reported off the coast of Cumberland Island.

Back then, no one knew what this mysterious condition was, what caused it, or how to stop it. And every year it got worse. 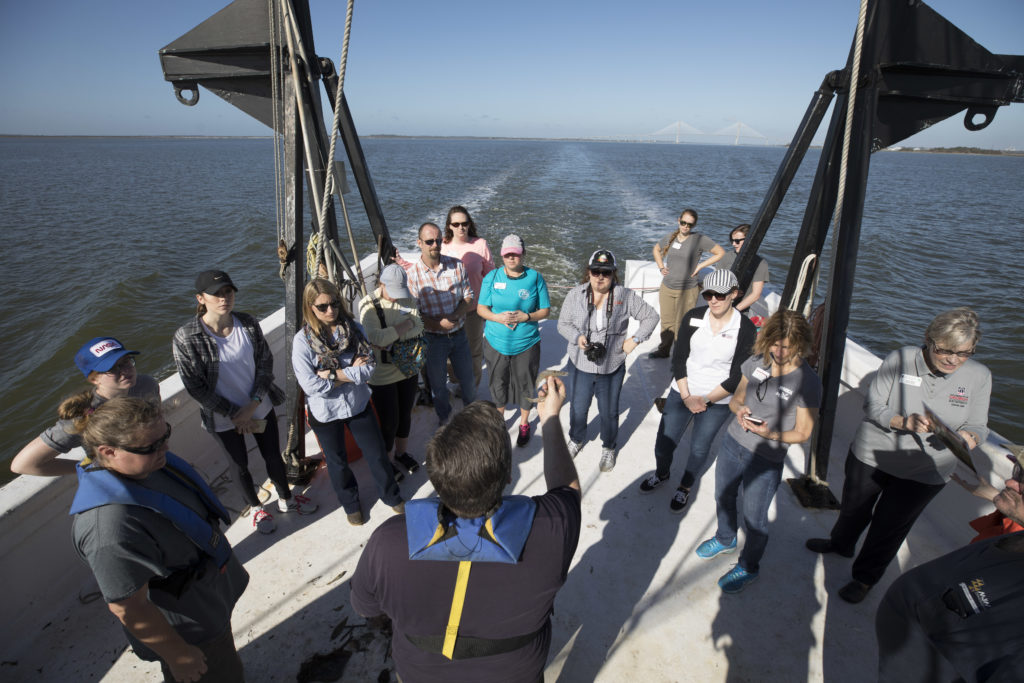 Brian Fleuch (foreground), associate director of the Marine Extension and Georgia Sea Grant, has been one of the university’s leads in working to solve the black gill problem in Georgia’s shrimp industry. (Photo by Peter Frey.)

The worst year on record for shrimping, 2013, proved a breaking point. “Black gill seemed to be a lot more prevalent. A lot of fishermen were noticing it in their catches,” says Bryan Fluech, associate director of Marine Extension and Georgia Sea Grant, a public service and outreach unit at UGA that focuses on improving the environmental and economic health of coastal Georgia. “Even if shrimp have black gill, they’re safe to eat. It doesn’t affect their taste. But shrimping has traditionally been our most valuable fishery, and black gill is definitely impacting Georgia shrimp.”

Industry partners soon brought it to the attention of extension agents, who quickly realized this unnamed condition had the potential to be catastrophic.

He discovered the black spots were actually the shrimp’s desperate attempt to fight off an attack by a microscopic parasitic creature.

“The shrimp recognizes that there’s a foreign invader in its body, takes its version of blood cells, and encapsulates it in melanin, which is the dark color,” Frischer says.

But for shrimp, that incredibly useful immune defense mechanism comes with a cost: The melanin makes it harder for them to breathe by restricting gas flow across the gills.

As a result, many either suffocate or get eaten by predators. The lucky ones survive until they molt, shed their old gills, and get new ones. But they often get infected all over again.

It’s a vicious cycle—one UGA experts are eager to break.

UGA’s Skidaway Island campus is the ideal place to find answers to complex ecological questions, like those facing the shrimping industry.

The campus has a trifold mission: research, education, and outreach. The Skidaway Institute focuses on much of the scientific research and training of the next generation of marine scientists, and Marine Extension and Georgia Sea Grant takes research to coastal communities to solve problems in environmentally sustainable and economically feasible ways. 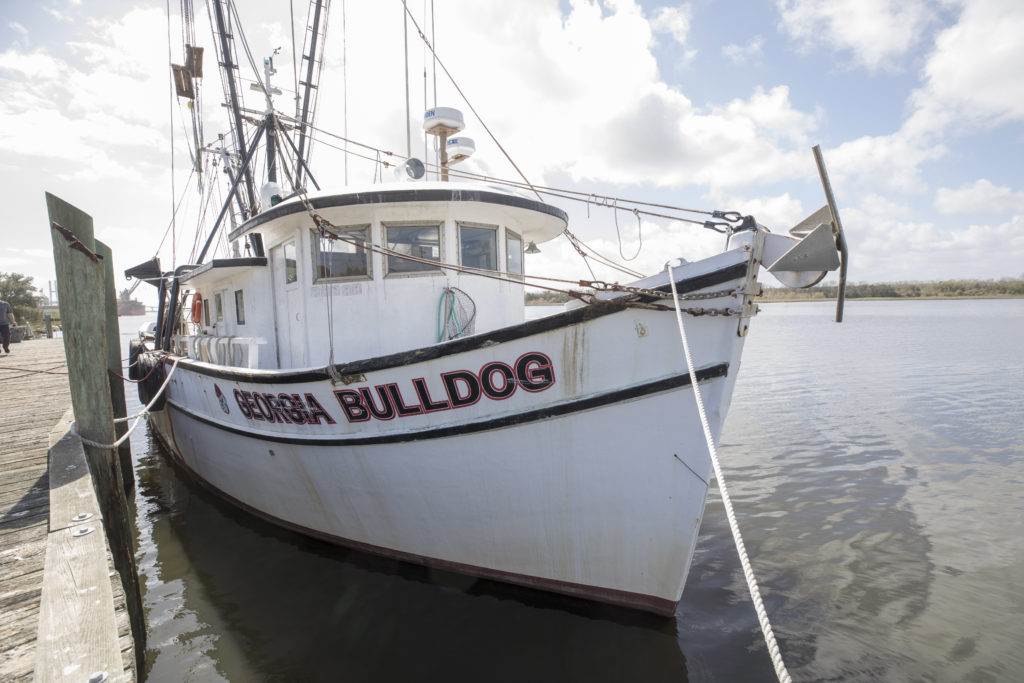 The Bulldog, based in Brunswick, has been helping conduct research on the high seas since 1980. (Photo by Peter Frey.)

Research at the institute ranges from studies on phytoplankton, the base of the marine food web, to physical oceanography and marine robotics. Education and outreach includes the popular, open-to-the-public UGA Marine Education Center and Aquarium, an oyster hatchery, and support to coastal industries through workshops, field and lab studies designed for K-12 students, public programming, and more.

Where Skidaway truly excels, though, is at the intersection of research and outreach, using science to make an immediate impact on industry.

“What Skidaway Institute and the UGA Department of Marine Sciences provide is a base understanding of our marine ecosystem,” says Elizabeth Harvey, an assistant professor of marine microbial ecology. “As the environment changes and as we have more economic consequences to that change, the institute is in a good position to help people figure out the ways to overcome issues they’re having and better understand them.”

For shrimping, that means determining how rising ocean temperatures might quicken the spread of black gill.

During the two-plus decades black gill has been on the DNR’s radar, summer typically signaled a resurgence in the condition. But with the warmer winters of recent years comes an earlier emergence of the deadly parasite and the disease it causes each year.

It’s another hit for the struggling industry that makes up a chunk of Georgia’s $16.8 million in commercial fishery sales. And while shrimpers can still make a decent living, many are having to diversify their crops, trawling for cannon ball jellyfish or other marine animals in the off season to make ends meet.

No one can blame shrimpers for jumping ship, not with the flood of cheap imported seafood lowering their prices and the increased price of everything from insurance to fuel jacking up the cost to fish. Black gill certainly isn’t making it any easier to make a living off shrimp. But researchers hope that being able to better predict expected harvests of shrimp can at least mitigate some of
the damage.

“We’re not going to be getting rid of black gill,” Fluech says. “There’s nothing to indicate that it’s going to disappear. One of our ultimate goals is to have a better understanding of how bad it’ll get so we can be more predictive in what the season will be like.” 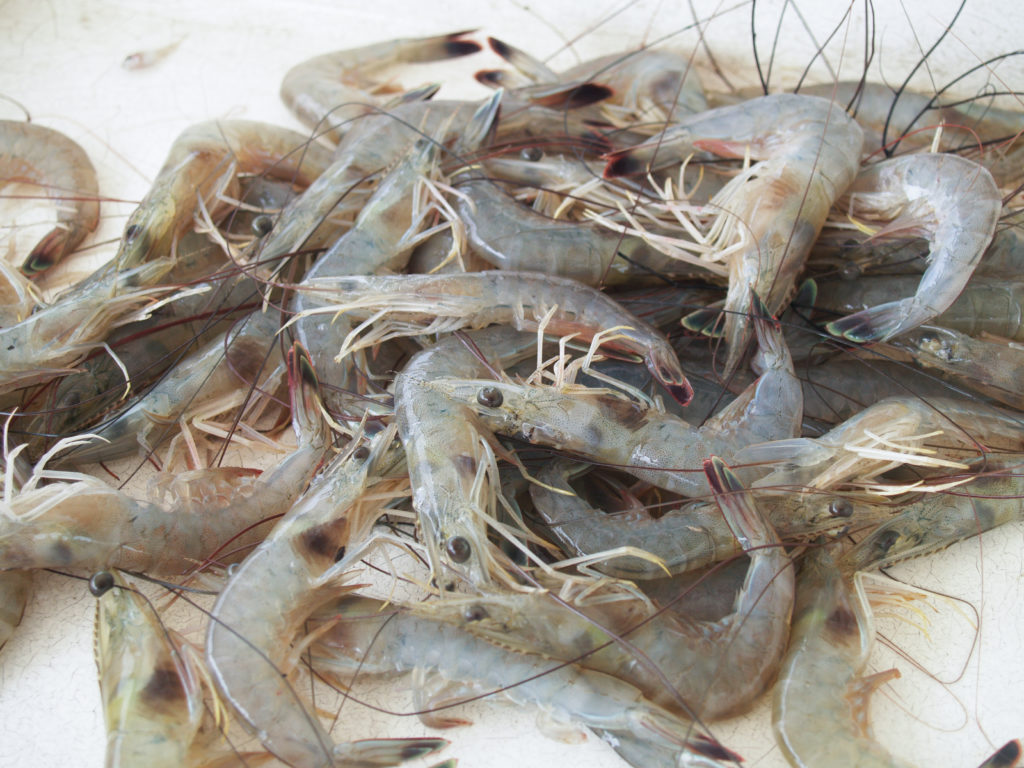 The telltale, shadowy signs of black gill are visible on some of these shrimp. (Photo by Peter Frey.)

Frischer was the first to find the culprit of the disease: a ciliate, a single-celled microorganism. But nobody knows which one.

And even if researchers did, no one knows how to eliminate it.

“Everybody understands, if you have a disease in an open system like the ocean, there’s not a lot you’re going to be able to do to fix it,” says Frischer. “You can’t put antibiotics in the water. You can’t just treat the ocean like that. But you can understand it, and understanding leads to improved forecasting and management.”

Even if there is no permanent fix, making shrimping season more predictable in the future may mean adjusting the season to when shrimp are still healthy and the microorganism that causes black gill is dormant, says Fluech. In the meantime, more accurate predictions may salvage what’s left of the industry.

Fishermen are now using an app, developed by UGA associate professor of engineering Kyle Johnsen, to collect data on black gill in real time and help monitor the locations of outbreaks. Marine extension agents are there to address issues as they arise.

“Now that I’ve got the app on my phone, if I start seeing one with black gill, I go back there and inspect every catch,” Gale says. “I want to get to the bottom of it.”

Researchers are confident the fishermen’s data are helping develop a more well-rounded picture of what the industry is facing, especially now that black gill is being reported off the coast of Louisiana and elsewhere throughout the Gulf.

“Again, we’re not going to get rid of black gill,” Fluech says. “Researchers alone aren’t going to be able to get it done, and managers by themselves aren’t either. It’s going to take everybody’s involvement to make sure that we can come to some common ground to see if we can find some answers.”

The other sides of Skidaway 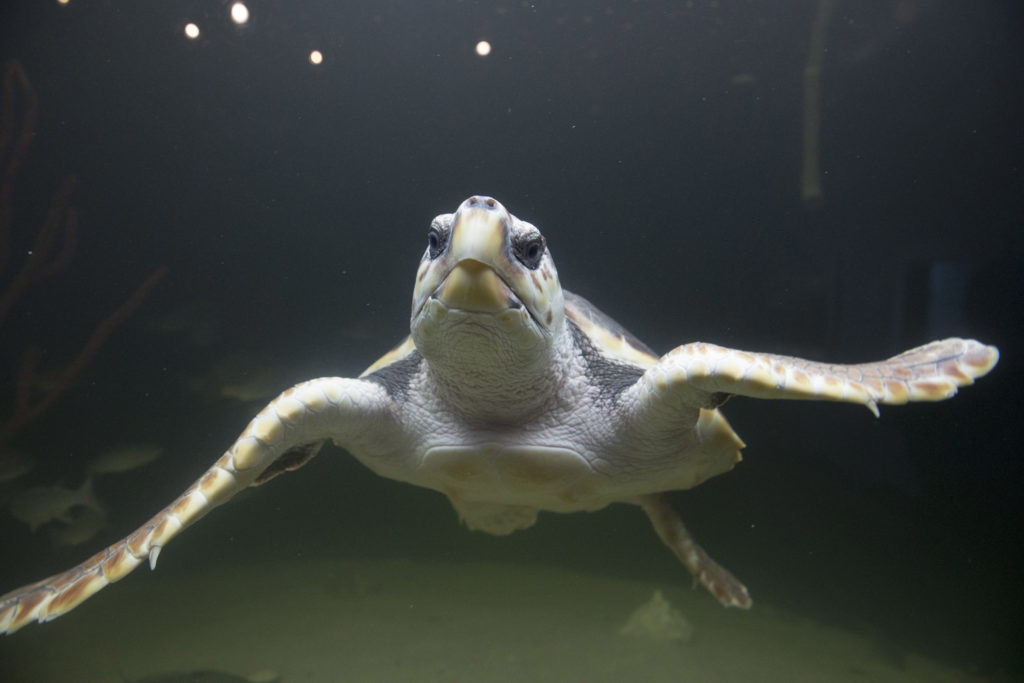 One of the residents of UGA’s Marine Education Center and Aquarium on Skidaway Island. (Photo by Peter Frey.)

Located about 30 minutes southeast of downtown Savannah, Skidaway Island’s 17.9 square miles include a state park, several luxury golf courses, and more than 8,000 people. The island is also home to the University of Georgia’s Skidaway Institute of Oceanography and UGA Marine Extension and Georgia Sea Grant.

Founded 50 years ago, the Skidaway Institute serves as a gateway to coastal and marine environments for programs throughout the University System of Georgia. Led by professor of marine sciences Clark Alexander, the primary goals of the institute are advancing the understanding of marine and environmental processes, conducting cutting-edge research, and training the next generation of great scientists.

The Marine Education Center and Aquarium, part of UGA Marine Extension and Georgia Sea Grant, is Georgia’s first saltwater aquarium, with 16 exhibition tanks featuring animals from off the Georgia coast and a touch tank where visitors can pet horseshoe crabs and starfish. 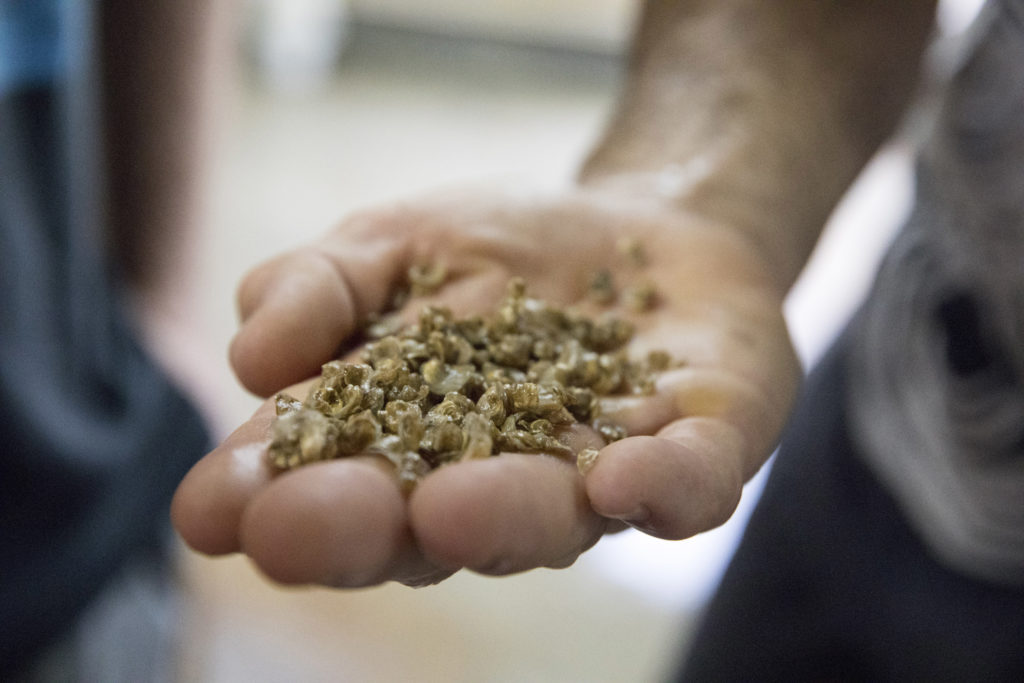 The Shellfish Research Lab, also part of Marine Extension and Georgia Sea Grant, focuses on research, training, and developing technology to make aquaculture industries more environmentally and economically sustainable. It also features the state’s first oyster hatchery, launched in fall 2015. The hatchery is expected to produce between 5 and 6 million spat, or baby oysters, per year, starting this year.

(This story first appeared in the Summer 2018 issue of Georgia Magazine.)