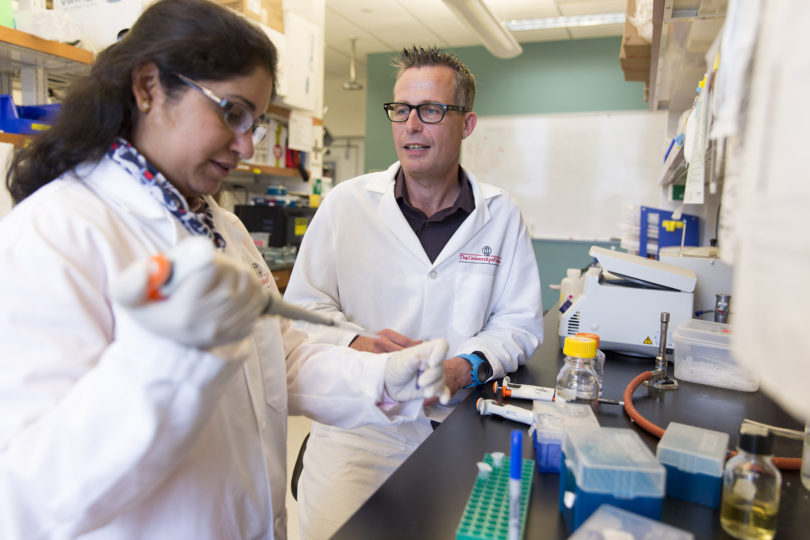 Athens, Ga. – Infectious disease scientists from research institutions including the University of Georgia have reported the discovery and early validation of a drug that shows promise for treating cryptosporidiosis, a diarrheal disease that is a major cause of child mortality and for which there is no vaccine or effective treatment.

“Cryptosporidiosis is largely a disease of poverty,” said Boris Striepen, Distinguished Research Professor of Cellular Biology in UGA’s Franklin College of Arts and Sciences and a member of the Center for Tropical and Emerging Global Diseases. “Globally, it primarily affects infants in developing countries, but there are patients in the U.S.-those with weakened immune systems, such as HIV/AIDS or transplant patients-that would benefit greatly from new therapeutics.”

Striepen began studying crypto, as researchers often call the parasite that causes cryptosporidiosis, more than a decade ago. Now he and Sumiti Vinayak, assistant research scientist at UGA’s Center for Tropical and Emerging Global Diseases, along with scientists at Novartis and Washington State University, have reported the discovery of KDU731, a potent inhibitor of cryptosporidium, in the journal Nature.

Identifying KDU731 as a potential drug for the treatment of cryptosporidiosis began with the screening of a selection of 6,200 compounds that showed strong activity against the related malaria parasite. The Novartis team led by Ujjini H. Manjunatha and Thierry T. Diagana identified compounds with activity against crypto and found KDU731 particularly promising based on preclinical data.

Crypto is most commonly spread through tainted drinking or recreational water. When a person drinks contaminated water, parasites emerge from spores and invade the cells that line the small intestine, causing severe diarrhea that can last for up to three weeks.

In 1993, more than 400,000 people living in the Milwaukee, Wisconsin, area were infected and became ill when one of the city’s water treatment systems malfunctioned. More than 100 people, mostly AIDS patients, died during the outbreak.

Outbreaks have also been linked to swimming pools and water parks. Crypto is the most common cause of diarrheal illness and outbreaks linked to recreational water because it is not easily killed by chlorine and can survive up to 10 days in properly treated water.

The Centers for Disease Control and Prevention reported at least 32 outbreaks in U.S. facilities during 2016-twice as many as in 2014, according to preliminary data in the agency’s May 18 Morbidity and Mortality Weekly Report.

Recent global studies have shown crypto to be one of the most important causes of life-threatening diarrhea in infants and toddlers, especially in areas that lack access to clean water. There is no vaccine and only one drug, nitazoxanide, approved by the U.S. Food and Drug Administration, but it provides no benefit for those in gravest danger-malnourished infants and immunocompromised patients.

Crypto is notoriously difficult to work with in a laboratory setting, but Striepen has developed new genetic techniques that make it easier to detect and follow the parasite. One technique involves manipulating crypto so that it emits light and is easier to detect and measure. For this study, Striepen’s team engineered a new “reporter” parasite that is amenable to whole-animal imaging, allowing the researchers to non-invasively track and record dissipation of the infection during treatment.

Striepen’s genetically modified organisms have been made available to researchers across the world in the hope that more scientists will be drawn to studying crypto.

“This is an important problem,” he said. “No one institution can solve it alone. It needs significant investment, and it needs a lot of people with good ideas.”

“The discovery of this compound represents an important step toward urgently needed treatment for gravely ill children around the world,” said Thierry Diagana, head of the Novartis Institutes for Tropical Diseases.