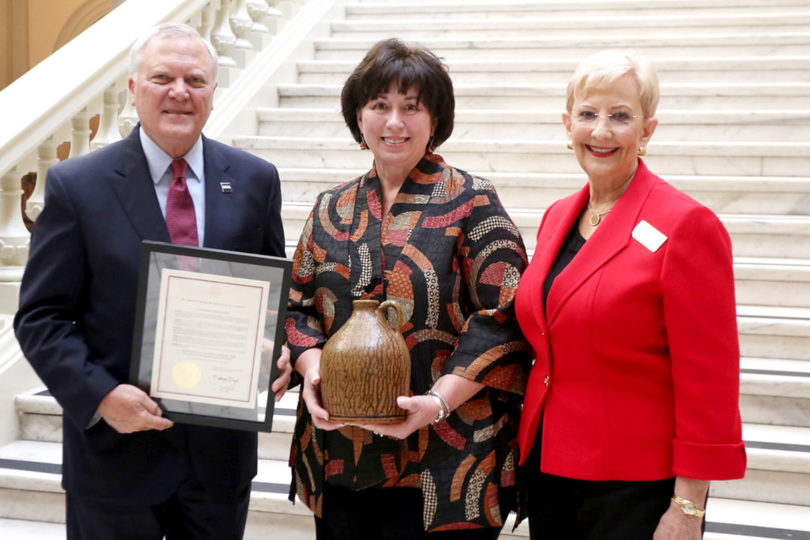 Athens, Ga. – The University of Georgia Richard B. Russell Library for Political Research and Studies is among the recipients of the third annual Governor’s Awards for the Arts and Humanities. Director Sheryl B. Vogt accepted the award from Gov. Nathan Deal in a ceremony at the state Capitol.

The commendation recognizes the Richard B. Russell Library for Political Research and Studies as “an invaluable resource for scholars all around the world. For 40 years this esteemed academic institution has chronicled Georgia’s political and social story, preserving our historical foundations for the next generation of government and educational leaders to learn from.”

A center for research and study of the modern American political system, the library’s original mission was to collect and preserve materials that document the life and career of the late Richard B. Russell, U.S. senator from Georgia from 1933 to 1971. With particular emphasis on the role of Georgia and the U.S. Congress, current collection development and programming focus on the dynamic relationship of politics, policy, and culture-generated wherever public interest intersects with government.

The Russell Library, housed at the Richard B. Russell Building Special Collections Libraries, was among 13 citizens and organizations recognized for their contributions to innovation and growth of the state’s civic and cultural vitality. The awards were presented in partnership with the Georgia Council for the Arts and Georgia Humanities Council.