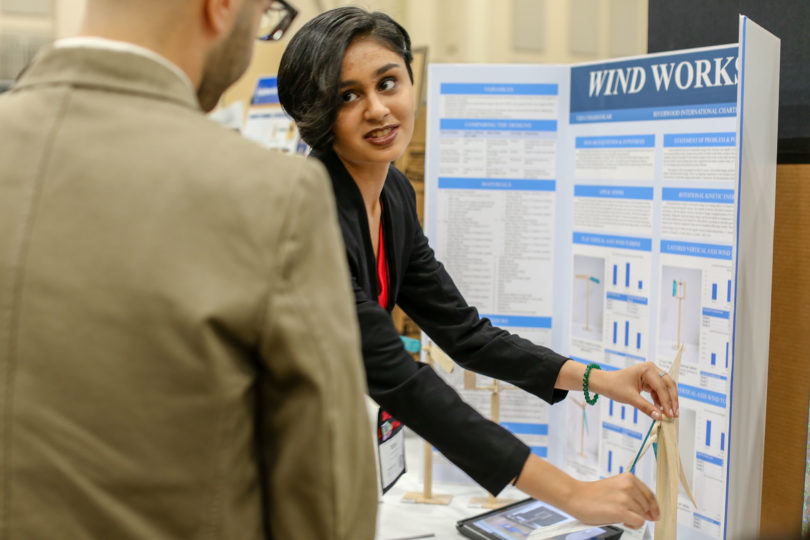 A student explains her poster at the fair in March 2019. (Submitted photo)

The premier annual science and engineering competition for Georgia middle and high schoolers was quickly transitioned to an online judging format for 2020 because of growing concerns about the spread of COVID-19. Normally, the Georgia Science and Engineering Fair is held at the Classic Center in downtown Athens, with about 750 students and hundreds of judges and volunteers in attendance.

Despite the major changes to the format of presentations and judging, 593 students from across the state participated in the online competition by recording videos of their projects and uploading their supporting materials. Spread out over several weeks, more than 200 judges evaluated the senior division projects in late March and junior division projects in early April. Finalists were judged in additional rounds, and 225 students were awarded nearly $25,000 in prizes. This year’s main event sponsor was Burns & McDonnell, with individual awards sponsored by a host of organizations.

The fair is a program of the Office of Academic Special Programs, which is part of the University of Georgia Center for Continuing Education & Hotel. Every year, thousands of students compete in local science fairs across the state. The winners are invited to compete in one of the GSEF-affiliated regional fairs, and the top projects from each regional fair are invited to attend and compete at GSEF.

“This year’s exhibitors have demonstrated exceptional skill, creativity and perseverance in the face of uncertainty,” said Laura Brewer, fair director and program coordinator in the Office of Academic Special Programs at the Georgia Center. “Many of them are already developing technologies and discovering solutions that will be critical to overcoming global challenges, and all have made great strides toward bettering our world. This is a testament to not only the students’ talents and hard work, but also to the support provided by their parents, mentors, teachers and fair directors.”

Students who opted-in to display their projects publicly are highlighted on the GSEF Showcase website. The top awards include:

In addition to the Pinnacle Awards, Georgia Science and Engineering Fair Regeneron ISEF Awards were presented to the following four projects:

Although the 2020 Regeneron International Science and Engineering Fair competition has been canceled, these students will still be honored by the Society for Science & the Public as ISEF finalists. To view the GSEF Showcase, visit https://sites.google.com/prod/view/gsef2020showcase. The Showcase site, which includes student project videos, will be viewable through May 31, 2020.

Other notable awards from this year’s fair include:

All of the 2020 awards are listed on the GSEF website: https://www.georgiacenter.uga.edu/sites/default/files/gsef-2020-announcement-awards.pdf