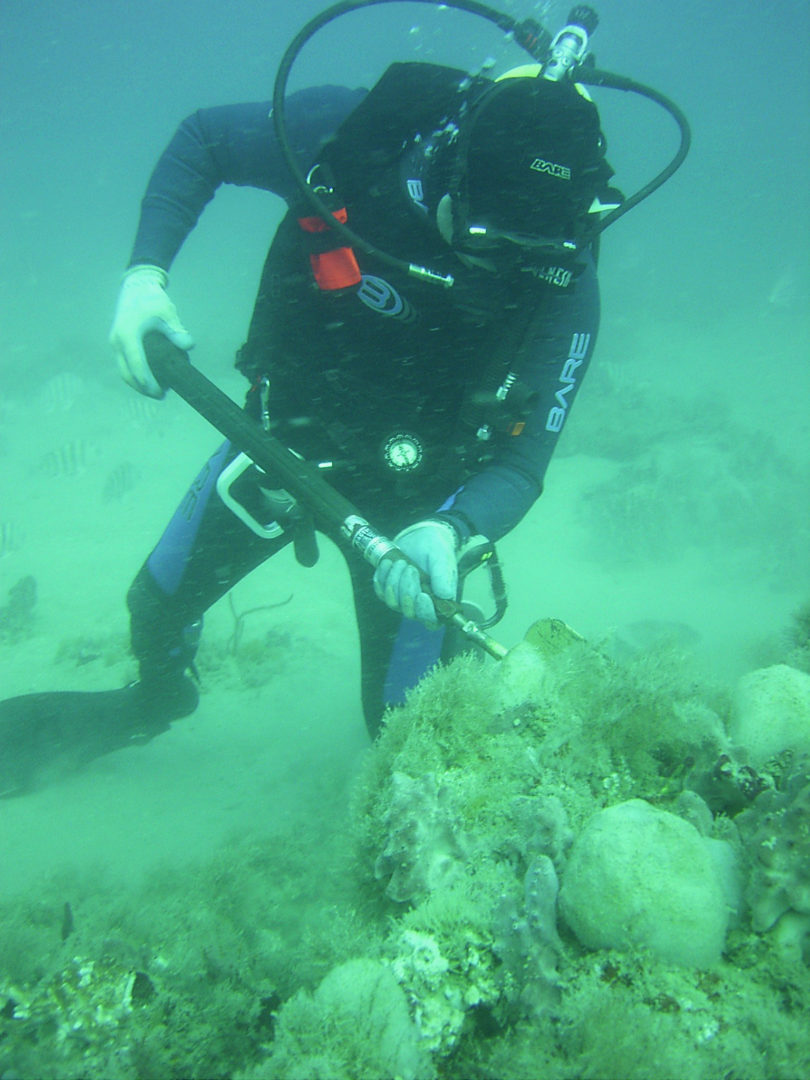 Scientists from UGA and the National Oceanic and Atmospheric Administration discovered and fully recovered a large fossilized whalebone near Gray's Reef National Marine Sanctuary approximately 20 miles off the Georgia coast in 2008.

Athens, Ga. – While the Atlantic gray whale was hunted to extinction by the 1700s, the Pacific or California gray swims today with a population near its pre-whaling levels. University of Georgia scientists have published their discovery of an Atlantic gray whale fossil off the Georgia coast that has re-enlivened efforts to connect the two species.

UGA geoarcheology professor Ervan Garrison, marine scientist Scott Noakes and research scientist Alexander Cherkinsky of the Franklin College of Arts and Sciences, along with Greg McFall of the National Oceanic and Atmospheric Administration, discovered and fully recovered the large fossilized whalebone near Gray’s Reef National Marine Sanctuary approximately 20 miles off the Georgia coast in 2008. The discovery was published in the journal Paleontologica Electronica in November.

The recovery of the fossil required two years, as it was embedded in substrate at the bottom of the ocean, 70 feet below the surface. The dig site was a small reef where the bone was impacted in sedimentation layers of shell and sand. The bone, a left mandible, was recovered in sections totaling 1.5 meters in length. The bone was radiocarbon dated to approximately 36,000 years. A joint UGA and Emory University team restored the bone for study and display.

“We were looking for more terrestrial animals that lived there when humans lived there, when Scott Noakes saw something unusual and called us over to take a look,” said Garrison, professor in the departments of anthropology and geology and lead author on the paper. “When colleagues at the Smithsonian said that it was clearly an Atlantic gray, we realized that the discovery would take on much more meaning.”

Noakes worked with restorers at the Smithsonian Institution to create casts of the bone. Garrison delivered two samples to Trent University in Peterborough, Ontario, where cetacean experts sought to identify the bones by its DNA. Though ultimately unsuccessful because of the age of the whalebone, the interest of the biologists helped propel the UGA scientists to their ultimate conclusions about it origins.

“This project has truly been a rewarding endeavor,” said Noakes, a research scientist at the UGA Center for Applied Isotope Studies. “The fossil has attracted considerable attention and finding skilled volunteer support has not been a problem.”

“The California grays looked exactly like the bones that were dug up in Scandinavia back in the 19th century,” Garrison explains, “one of the first instances where a living species was named based on the fossil evidence.”

The full journal article is available at http://palaeo-electronica.org/content/2012-issue-3-articles/336-pleist.