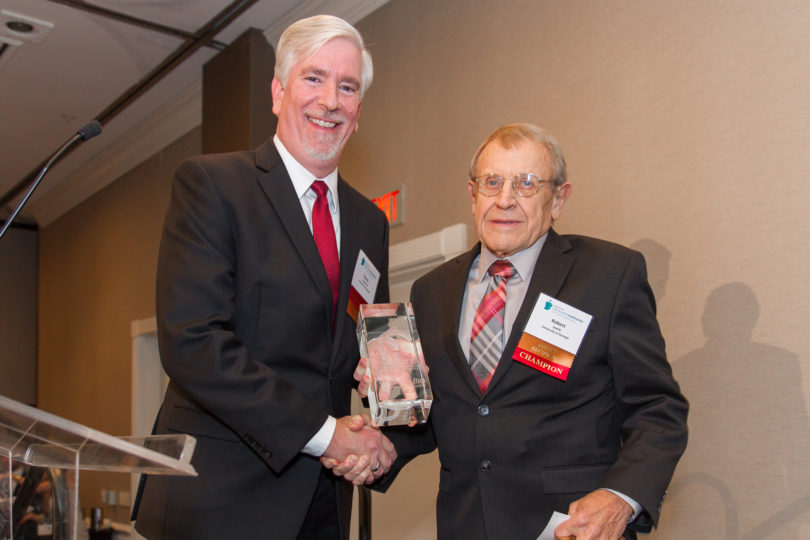 Athens, Ga. – University of Georgia faculty and staff were honored with multiple awards by Georgia’s life sciences industry association, Georgia Bio, at its 2017 Annual Awards Dinner on Jan. 26 in Atlanta.

“We are pleased to see such strong recognition of UGA’s impact on the state’s burgeoning life sciences industry,” said UGA Vice President for Research David Lee. “These awards to UGA bioscience leaders affirm the advances we have made in supporting entrepreneurship and translational research at the university.”

Derek Eberhart, director of Innovation Gateway, was honored with the Community Award “for his leadership in connecting industry with university expertise and inventions for the public good, promoting economic development, and increasing research visibility.” Innovation Gateway, a unit of the Office of Research, encompasses UGA’s intellectual property licensing and startup support functions to help streamline the path from the lab to the marketplace, ensuring that UGA research discoveries reach their full potential for public benefit.

UGA’s commercialization program has facilitated the generation of more than 600 products and 150 startup companies to date based on UGA research.

CCRC scientists study the structures and functions of the complex carbohydrates of plants, microbes and animals to determine the role of carbohydrates in growth and development, host-pathogen interactions and disease processes such as cancer. The center has generated considerable intellectual property and multiple startup companies since its inception.

Robert Ivarie, professor emeritus of genetics, was a recipient of the Georgia Innovation Award, honoring those who forge new ground by thinking outside traditional paradigms to create a unique technology. Ivarie is co-founder of Avigenics, which subsequently was known as Synageva, a company based in UGA’s startup incubator. Synageva developed rare disease therapeutics based on technologies Ivarie invented using transgenic chickens as bioreactors to produce medically relevant proteins.

Synageva was acquired by Alexion for over $8 billion in 2015, and Georgia Bio honored the acquisition as a “Deal of the Year” in 2016. A drug based on Ivarie’s invention is now on the market in the U.S., Europe and Japan. The company maintains a significant footprint in Oconee County, Georgia.

Steven L. Stice, director of UGA’s Regenerative Bioscience Center, was honored as a recipient of the 2017 Georgia Bio Industry Growth Award, the highest honor bestowed each year by Georgia Bio.

Stice was recognized for his longstanding commitment to growing the life science industry in Georgia as well as the advancement of regenerative medicine research and commercialization in the state. He is the D.W. Brooks Distinguished Professor, a GRA Eminent Scholar, and founder of two Athens-based biotechnology companies, ArunA Biomedical and SciStem.