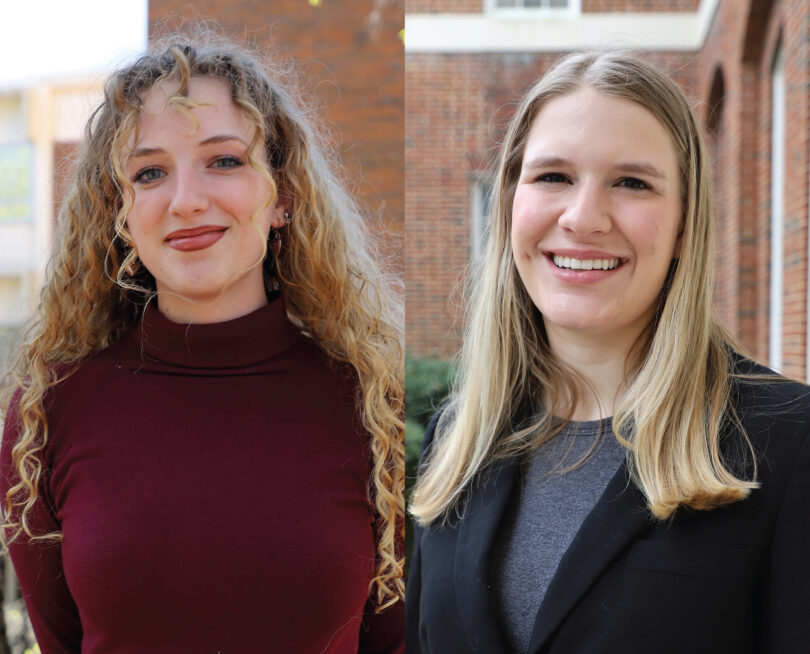 (L to R) Natalie Moss and Lauren Wilkes were both named Marshall Scholars this year. (Photos by Stephanie Schupska)

Honors seniors Natalie Moss and Lauren Wilkes received the honor, which funds graduate study in the United Kingdom at any institution and in any field of study

For the first time, two University of Georgia students received a prestigious Marshall Scholarship in the same year. Honors seniors Natalie Moss of Norcross and Lauren Wilkes of New Orleans, Louisiana, will continue their studies in the U.K. next year through the award, which is among the most selective graduate scholarships for Americans. UGA is the only public institution of higher learning to have multiple recipients this year, along with private institutions Harvard, Yale, the University of Pennsylvania and the Massachusetts Institute of Technology.

The Marshall Scholarship—designed to strengthen the enduring relationship between the British and American peoples, their governments and their institutions—funds graduate study in the United Kingdom at any institution and in any field of study. This year, 40 students were named Marshall Scholars.

Moss is majoring in anthropology and geology with a minor in biology, and Wilkes is a Foundation Fellow majoring in data science with a minor in Chinese language and literature. Both are students in the Franklin College of Arts and Sciences and the Morehead Honors College, and both have received funding for their research through UGA’s Center for Undergraduate Research Opportunities.

“I am very proud of Natalie and Lauren for winning the Marshall and gaining this wonderful post-graduate opportunity to study in the U.K.,” said UGA President Jere W. Morehead. “I know they will make a positive impact in their fields of study.”

Including Moss and Wilkes, UGA has had nine Marshall Scholars since the scholarship’s inaugural class in 1954.

“Having Natalie and Lauren named as Marshall Scholars in the same year is just an incredible accomplishment, both for them and for the University of Georgia,” said Meg Amstutz, dean of the Morehead Honors College. “We are grateful to the faculty and staff who have supported them, and we are proud of the way they have advanced research in their fields.” 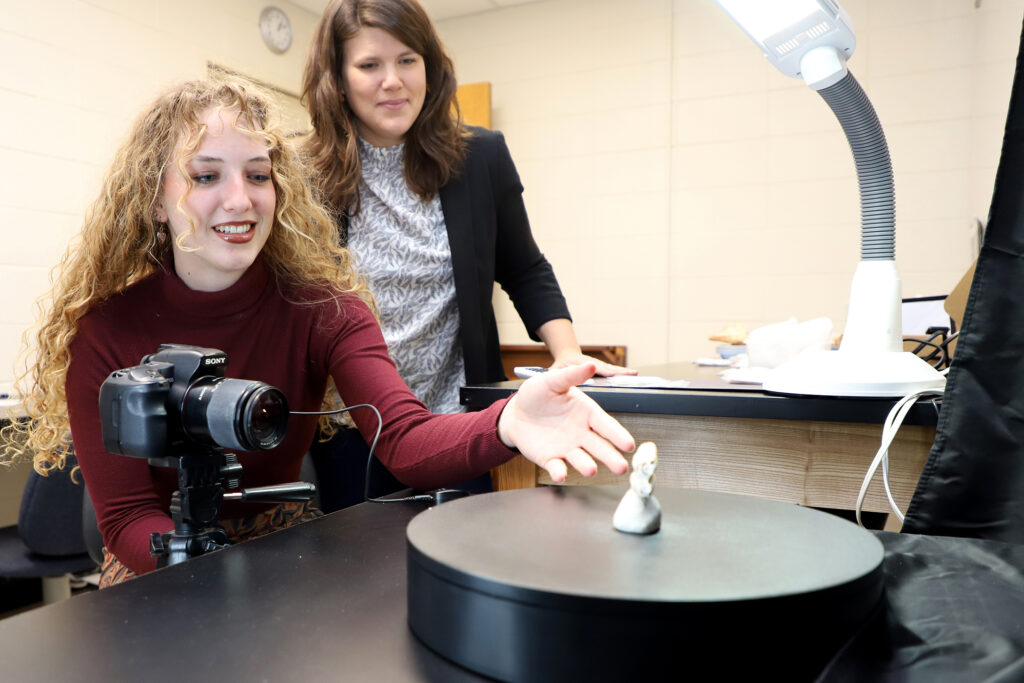 Natalie Moss, left, photographs an ancient tooth before drilling a sample of the enamel and collecting the tooth root for stable isotope analysis. She is conducting her research with Suzanne Pilaar Birch, associate professor of anthropology and geography. (Photo by Stephanie Schupska)[/caption

Moss plans to pursue two one-year master’s degrees through the Marshall Scholarship. The first will be in human osteology and funerary archaeology at the University of Sheffield. The second will be in biological anthropological science at the University of Cambridge. Her goal is to study the human skeleton in depth to increase her understanding of biological anthropology in prehistory and the modern world.

Long term, she plans to pursue a doctorate in anthropology and intends to work both as a professor at a research institution and as a consultant identifying missing persons around the globe.

Moss is currently conducting research on teeth and bones from ancient burial sites with Suzanne Pilaar Birch, an associate professor of anthropology and geography and director of the Quaternary Isotope Paleoecology Lab and the Center for Archaeological Sciences at UGA.

Her previous undergraduate research has included applied stable isotope analysis of prehistoric human-environmental interactions with Pilaar Birch; research on anemia’s effect on the skeleton with Susan Tanner, associate professor of anthropology; and study of the cell cycle with Edward Kipreos, professor of cellular biology.

Additionally, Moss has interned with the Georgia Museum of Natural History, served as a teaching assistant in anthropology, and volunteered with The Backpack Project of Athens and Camp Twin Lakes. She is currently a tutor with Athens Prison Tutorial. 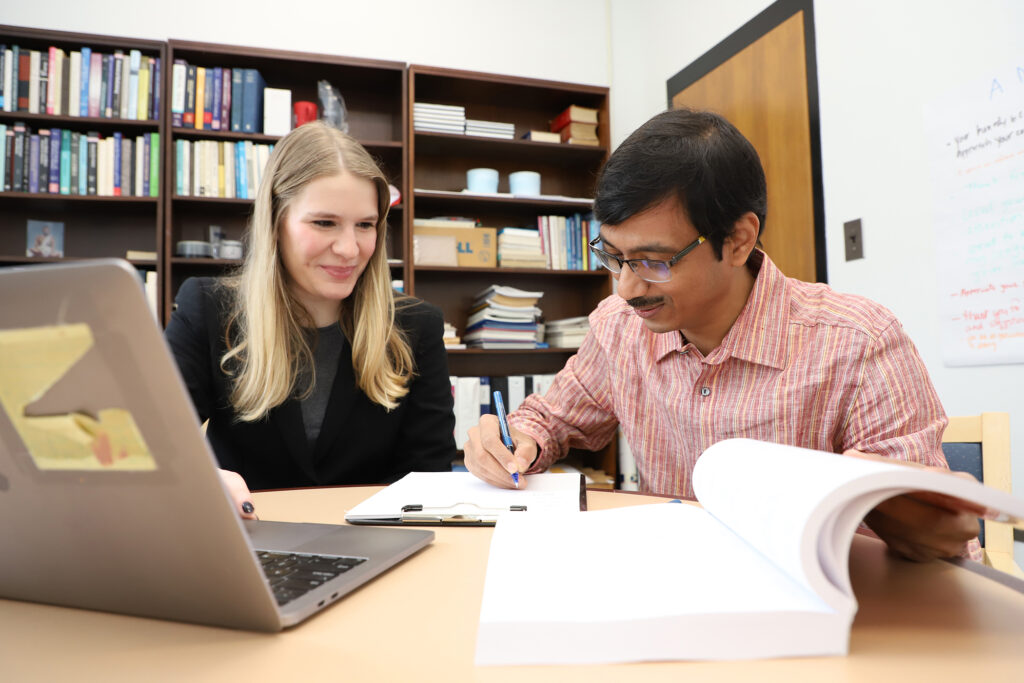 Lauren Wilkes discusses design and analysis of complex computer models with her research mentor, Abhyuday Mandal, professor of statistics. Rapid growth in computer power has made it possible to study complex physical phenomena that might otherwise be too time consuming or expensive to observe, she said. (Photo by Stephanie Schupska)

Wilkes studies machine learning with the goal of building intelligent computer defense systems secure enough for real-world use. She will continue her studies as a Marshall Scholar through two one-year master’s degrees, the first in advanced computer science and the second in technology policy, at the University of Cambridge.

Since June, Wilkes has been interning with groups at the Massachusetts Institute of Technology, beginning in the Computer Science and Artificial Intelligence Laboratory and now with the MIT Lincoln Laboratory in the artificial intelligence technology group. At UGA, Wilkes is working in the department of statistics with professor Abhyuday Mandal and assistant professor Qian Xiao on design and analysis of complex computer models.

At the University of Oxford in fall 2021, Wilkes was an associate student at Keble College and conducted research on self-driving cars and password security measures in the department of computer science.

Additionally, she has been a research mentee with Google Research, a software development engineering intern for Amazon Web Services, a data engineering intern for the New York City Cyber Command, a data and tech lead for Rising Academies based in Ghana, and a data analytics intern at the STAR Academy in New Orleans. She was an education data science fellow with Schmidt Futures and the University of California, Berkeley.

Her UGA involvement includes serving as CodeHub co-president, a statistics tutor and a teaching assistant. She also is currently head of outreach for DataEthics4All, vice president of the Statistics Club, an executive board member for Asha for Education, an analyst for The Backpack Project and a technology sector member in the Corsair Society.

This year, the University of Georgia also broke its previous record for the number of Marshall Scholarships offered to its students, with three in 2022. The third student offered the scholarship was Natalie Navarrete of Boca Raton, Florida, who subsequently accepted a Rhodes Scholarship.

UGA’s major scholarships office, housed in the Morehead Honors College, works closely with all students across campus as they apply for national, high-level scholarships. For more information, contact Jessica Hunt at jhunt@uga.edu.