A partnership between a UGA professor and the creator of the “Sherman’s Lagoon” comic strip has resulted in a new short film series, “The Adventures of Zack and Molly,” which highlights the Gulf of Mexico and the importance of healthy oceans.

Samantha Joye, UGA Athletic Association Professor of Arts and Sciences and professor of marine sciences, met artist Jim Toomey at an ocean conference several years ago, and together they hatched an idea to reach kids about the ocean through short-form media. 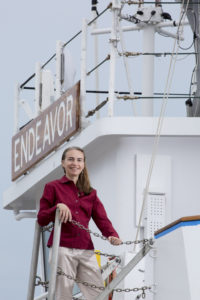 Toomey is an award-winning cartoonist and filmmaker who created the popular comic strip “Sherman’s Lagoon,” which appears in over 250 daily newspapers in 20 countries and six languages. The strip’s underwater theme explores environmental issues in a way that is meant to appeal to adults and children.

For the past several years, Joye has been the project director of the ECOGIG research consortium. ECOGIG (Ecosystem Impacts of Oil and Gas Inputs to the Gulf) is led by the University of Georgia and is one of several research consortia funded in the wake of the 2010 Deepwater Horizon accident in the Gulf of Mexico. ECOGIG has placed a strong emphasis on education and public outreach, so finding ways to reach a variety of audiences has been an important part of the program.

“The ECOGIG program allowed us to invest in public outreach in an unprecedented way. It has been incredibly exciting to have the opportunity to work with Jim to develop a novel way to reach the public—especially kids!—and share the importance of our work on deep ocean ecosystems and its relevance to ocean health,” said Joye.

“The Adventures of Zack and Molly” follows the story of a young man who is more interested in the small world of his smartphone than the larger world around him. Zack’s online request for a roommate is answered by Molly, a tech-savvy Dumbo Octopus on a mission to tell the world about the importance of the deep ocean.

The series was produced by Toomey and two education and public outreach coordinators working with Joye in the UGA department of marine sciences, Sara Beresford and Emily Davenport.

Along with a learning guide and a variety of educational resources, the series is now available. Learn more about Joye’s research and outreach efforts.