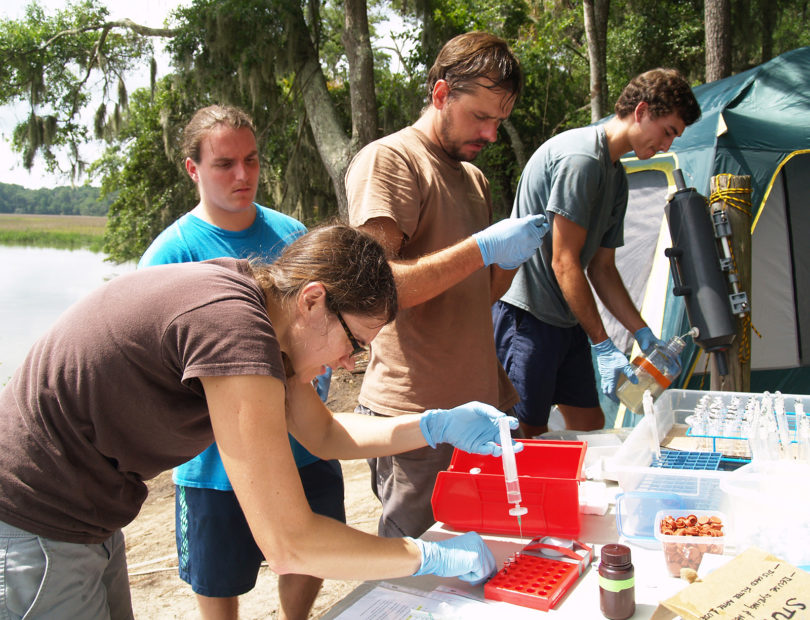 Skidaway Island, Ga. – Pitching a tent in the woods and fighting off mosquitos may not sound like logistics of a typical oceanography experiment, but that is how researchers at the University of Georgia Skidaway Institute of Oceanography completed an intensive, round-the-clock sampling regimen this month. The project, dubbed “26 Hours on the Marsh” was designed to investigate how salt marshes function and interact with their surrounding environment-specifically how bacteria consume and process carbon in the marsh.

The team set up a sampling station and an outdoor laboratory on a bluff overlooking the Groves Creek salt marsh on the UGA Skidaway Institute campus. The scientists collected and processed water samples from the salt marsh every two hours, beginning at 11 a.m. on July 16 and running through 1 p.m. July 17. By conducting the tests for a continuous 26 hours, the team can compare the samples collected during the day with those collected at night, as well as through two full tidal cycles.

“We wanted to be able to compare not only what is happening to the carbon throughout the tidal cycle, but also what the microbes are doing at high and low tides and also during the day and night,” said Zachary Tait, a UGA Skidaway Institute research technician. “So we had to have two high tides and two low tides and a day and night for each. That works out to about 26 hours.”

The research team ran more than 30 different tests on each sample. The samples will provide data to several ongoing research projects. A research team from the University of Tennessee also participated in the sampling program. Their primary focus was to identify the bacterial population using DNA and RNA analysis.

This sampling project is one of many the researchers conduct during the year. They use an automatic sampling system for most of the other activities. The automatic system collects a liter of water every two hours, and holds it to be collected and processed at the end of the 26-hour cycle. The team could not use the auto sampler this time for several reasons; the scientists needed to collect much more water in each sample than the auto sampler could handle and the auto sampler tends to produce bubbles in the water, so it is not effective for measuring dissolved gasses.

“The UT scientists wanted to conduct enzyme analysis as well as RNA and DNA tests on the samples, and for those, the samples must be very fresh,” said Megan Thompson, a UGA Skidaway Institute research technician. “You can’t just go out and pick them up the next day.”

About a dozen scientists and students were involved in the project, including Thompson, Tait, a group of undergraduate students completing summer internships at UGA’s Skidaway Institute and a similar group from UT. They split their time between the tent and outdoor laboratory on a bluff overlooking Groves Creek, and the UGA Skidaway Institute laboratories a mile away.

“It was an interesting experience, and I think it went very well,” said Thompson. “However, when we wrapped it up, we were all ready to just go home and sleep.”