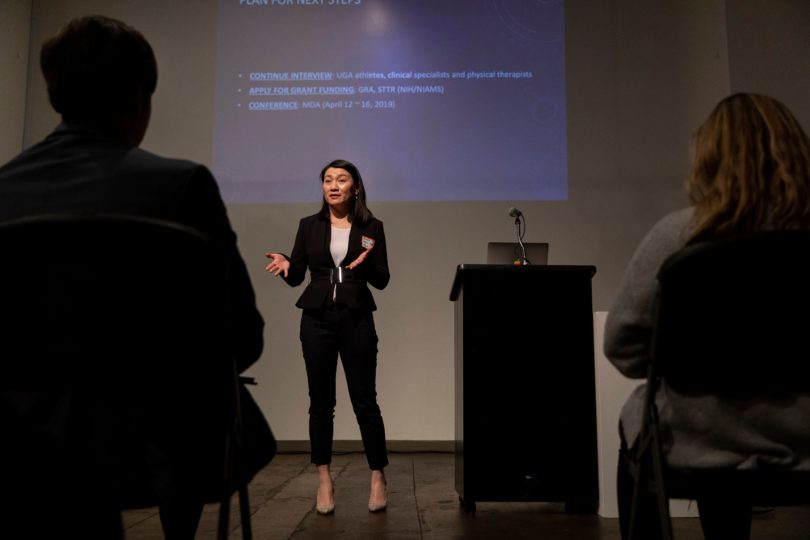 Amelia Yin presented her ideas about an innovative treatment for muscle strains at UGA's I-Corps in February, a National Science Foundation-funded accelerator program.

The University of Georgia’s startup program generates economic value of more than half a billion dollars annually, according to a new analysis. Startup companies created through Innovation Gateway, the university’s arm for research commercialization, have an economic impact of $531 million across the United States, including $322 million in the state of Georgia.

“We’re thrilled to be able to attach an economic impact number to the university’s work in startups,” said Derek Eberhart, associate vice president for research and executive director of Innovation Gateway. “We know there’s a lot of value created by startup companies emerging from UGA research, and we now have data that quantify that impact.”

The study, conducted by UGA economist Jeffrey Dorfman, is the most comprehensive survey to date on the impact of UGA-assisted startups. Dorfman used data from Innovation Gateway’s 2018 survey of startup companies—including jobs created, payroll and operating expenses—to calculate an estimate of overall economic impact.

Despite the impressive results, Dorfman’s study probably isn’t capturing all the relevant impact data, according to Eberhart.

“This is just the tip of the iceberg,” he said. “The startup survey is voluntary, and not all of the more than 175 companies based on UGA research provide a response. In addition, this study only captures a portion of the overall economic impact of UGA’s commercialization program, which includes a robust licensing program in addition to supporting startups.”

Such data demonstrates why UGA is known nationally for its strong innovation ecosystem, which has seen a 40 percent increase in new discoveries by university researchers over the past three years. UGA is among the best in the nation at licensing these new discoveries to industry partners for product development, ranking among the top 10 universities for deal flow for 11 consecutive years.

This licensing activity leads to new products that benefit the citizens of Georgia and beyond. In 2017, the university ranked No. 1 in the country for the number of new products brought to market. Such products include things like poultry vaccines—for which College of Veterinary Medicine professor Holly Sellers was recently honored as UGA Inventor of the Year—as well as an eco-friendly charcoal lighter; soil remediation products; research and educational tools; and new peanut, pecan, soybean, wheat, citrus and ornamental plant varieties.

Sales of these products generate licensing revenues for UGA. Since 2015, there has been a 60 percent increase in licensing revenue to more than $10 million in 2018, placing UGA in the top 15 among public universities.

Growth in Innovation Gateway’s startup pipeline, from 42 projects to more than 100, was facilitated by a $500,000 Innovation Corps (I-Corps) grant from the National Science Foundation and a $500,000 i6 Challenge award from the Department of Commerce. The I-Corps grant enhances UGA’s ability to provide early evaluation of projects through a customer discovery process. The i6 Challenge award created a New Materials Innovation Center, a large-scale testing facility for new materials being developed by entrepreneurs, startups and researchers.

Innovation Gateway represents just one option available to UGA entrepreneurs, who can also receive assistance through the Small Business Development Center or the student-focused Entrepreneurship Program. UGA’s innovation ecosystem is poised to accelerate through development of a new Innovation District, a hub designed to encourage innovation, entrepreneurship, creativity and industry collaboration. Plans include an interconnected set of facilities offering a broad range of spaces and amenities that will foster collaboration, nurture a culture of entrepreneurship and help develop the pathways necessary to accelerate commercialization of discoveries and ideas generated at the university.