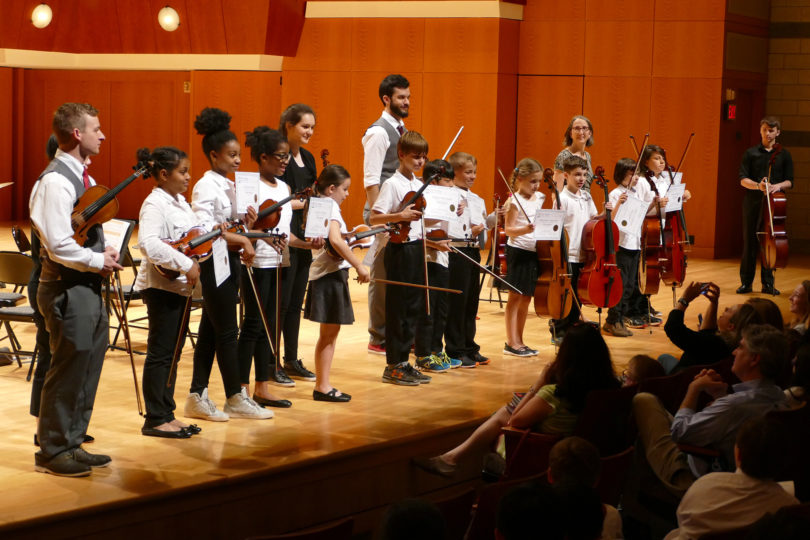 Every April, dozens of elementary and middle school students take the stage of the University of Georgia Performing Arts Center’s 1,100-seat Hodgson Concert Hall. The music education majors who instructed them for a year or more introduce them, conduct them and play alongside them.

At the end, when families crowd forward with cellphones pointed to the stage, the schoolchildren hold their certificates, the college students stand behind them, and the group smiles wide, all accomplished after a year of work.

For 16 years, the UGA String Project has given music education students a chance to begin putting their lessons into practice by offering lessons of their own: string education for elementary and middle school-aged children that is affordable and, increasingly, rare.

“The benefits of starting music lessons on an instrument in elementary school have been well documented, but since none of the area public schools has a string program at the elementary school level, the UGA String Project provides families with a low-cost opportunity for their children to begin learning violin, viola, cello or bass,” said Ruth Monson, co-director of the project since 2009.

Music education students from the Hugh Hodgson School of Music work with their professors to discuss and design lessons for their elementary and middle school-aged students, who often don’t have access to string education programs or couldn’t afford private lessons. Classes begin each fall (preceded by an annual informational open house/instrument petting zoo at the Hodgson School—this year’s is set for Aug. 28 at 6 p.m.) and continue through the spring, culminating in a public performance.

Created in 2001, the project is the product of a grant from the National String Project Consortium, secured for the Hodgson School by David Starkweather, professor of cello and the project’s original director.

One of Taylor’s first moves as director strengthened ties between the project and Clarke County schools. The project was in need of a new practice space after busing Clarke County students to campus became inconvenient and other School of Music areas’ demand for space grew.

“I decided to make a connection with Barrow Elementary School, who I had already worked with, to rent rooms for our marching band camps,” said Taylor. “Principal Ellen Sabatini was and has been absolutely wonderful—she offered up the space to us at no cost. The staff over there are all troopers, helping make sure we have what we need.”

Establishing that relationship between the UGA String Project and Clarke County schools became the first step in expanding the reach of the Hodgson School’s after-school music programs.

Today, many string project students who are ACC residents get extra support through need-based tuition scholarships and the use of an instrument courtesy of Clarke County schools. AthFest Educates and Ronald Sachs Violins donated tens of thousands of dollars-worth of instruments to this end.

Additionally, the success of the string project has spurred the creation of the ACC School Band Project and the Boys & Girls Club String and Drum Project, opening up access to low-cost music education to more students.

And the project’s reputation continues to expand even today. Over the summer, Hodgson School students traveled to Albany to take lead roles in the Georgia Music Foundation’s summer music camp at the Thornton Park Boys & Girls Club.