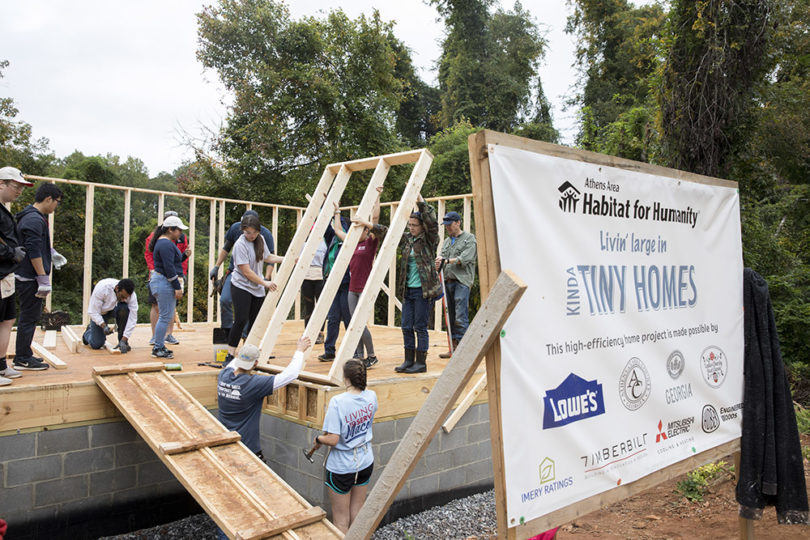 Student and community volunteers came together to build the Habitat for Humanity Kinda Tiny House project on New Hope Drive in Athens. (Photo by Dorothy Kozlowski/UGA)

Currently under construction in Athens, the plan beat out professional architectural firms

There is no technical definition of a tiny house, but the working understanding is a home that is 400 square feet or smaller.

So what is a “Kinda Tiny” home? Well, it’s a little bit bigger, but not much.

The home design that won Athens’ first “Kinda Tiny” housing competition was 794 square feet and designed by UGA student Jacqueline Menke, who is currently finishing up a Master of Landscape Architecture at the College of Environment and Design. 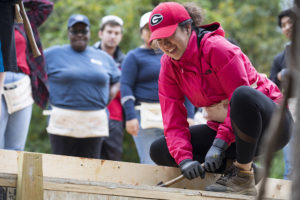 Third-year student Helga Schroeder pulls nails from a board. (Photo by Dorothy Kozlowski/UGA)

The contest was the brainchild of Athens Area Habitat for Humanity and Georgia’s U.S. Green Building Council, and the home designed by Menke is currently under construction in Athens. The family selected by Habitat will move into the house this spring.

The average size of a home in the United States has doubled since the 1960s to 2,600 square feet, but there is a movement underway to embrace smaller, more energy efficient homes.

Menke’s house will be an example of a greener home, but it’s also meant to start a conversation in Athens about zoning codes, said Spencer Frye, executive director of Athens Area Habitat for Humanity. “You aren’t allowed to build an actual tiny home in Clarke County,” said Frye. “The minimum size for a single-family home is 600 square feet. These size restrictions were put in place in reaction to integration. I don’t like the idea of our community still adhering to these codes.” 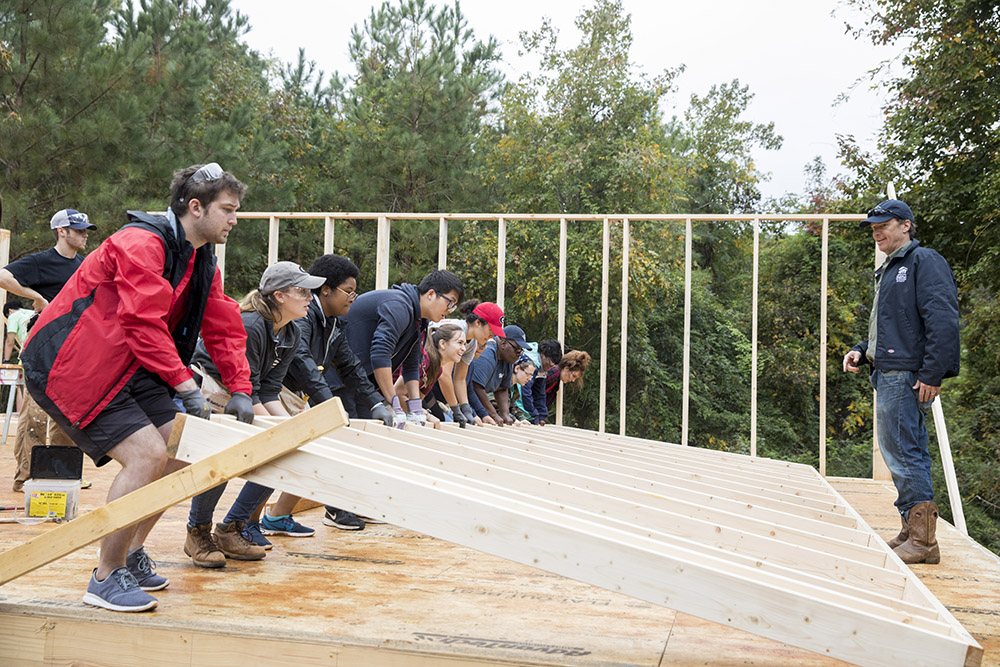 Spencer Frye, right, oversees the raising of a wall on the “Kinda Tiny” house construction site. (Photo by Dorothy Kozlowski/UGA)

That’s how the idea to provide a real-life example of the building-code restrictions in Athens came to life. Frye and David Hyde from TimberBilt, an Athens-based sustainable construction company, devised the “Kinda Tiny” home competition, thinking it could act as a test run for green building standards and show the county what could be done with a small home.

“We wanted to begin a discussion,” said Frye. “If we want to have a real dialogue around home size in Athens-Clarke County, I want us to work from zero and move up and not keep these antiquated codes on the books.”

Menke entered the “Kinda Tiny” house contest as part of a class project in UGA professor Alfie Vick’s green building class. Because her major is landscape architecture, she had to do a lot of research in order to complete a home design, but she won, in part, because of how seamlessly her plan worked with the site’s landscape. 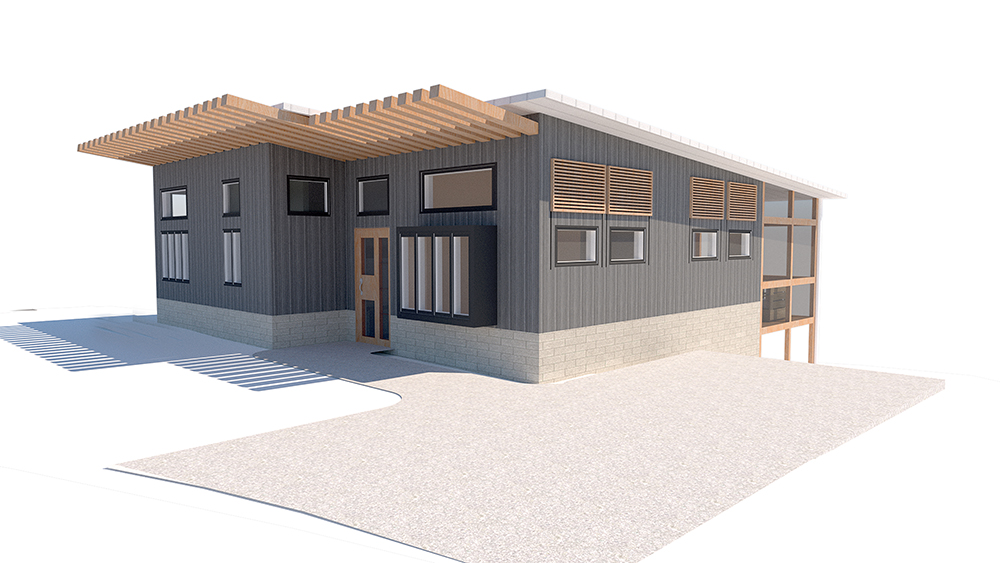 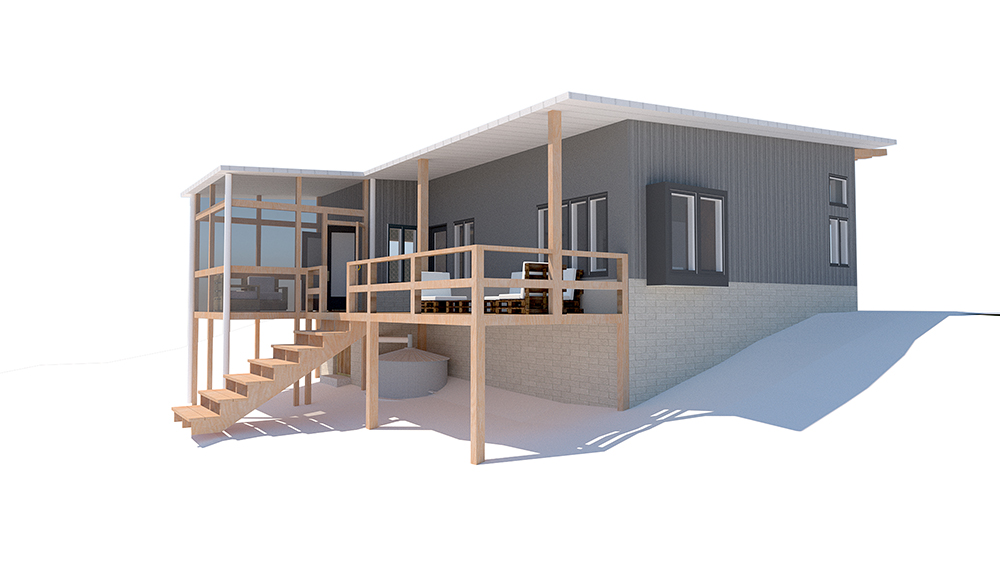 A view of the back of the “Kinda Tiny” home.

“One of things that made her design stand out, after talking to some of the judges, is the fact that her building really specifically relates to the site. She took into account the topography, and I think it was her landscape architecture background that gave her the insight to how the building and the site would interact together,” said Vick. 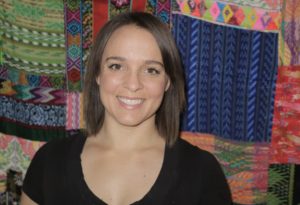 Menke said she drove through the neighborhood and past the lot several times and got inspired by the surrounding homes as well as the lot where the home would eventually be built. She noticed all of the other homes were elevated and had ramps. She made hers accessible as well by using a zero entry, which means no steps or other hindrances to entrance.

“I also thought of the sun’s path and provided afternoon shade with the roof slope, which plays into LEED standards. And I addressed the issue of the slope and runoff with my landscape plan,” Menke said. 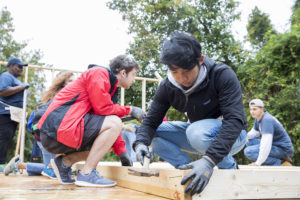 LEED, which stands for Leadership in Energy and Environmental Design, is the most widely used green building rating system in the world. Menke said LEED standards helped guide her design from the beginning.

Menke’s design had the sustainability features that the Green Building Council wanted, and the practicality desired by Habitat. “Our homes are built by volunteers so they can’t be technically challenging,” said Frye.

The judges awarded two first place awards, one to Menke and one to a team of professional architects from Atlanta. The homeowners, who had already been selected by Habitat, got to choose the winner, and they picked Menke’s design. 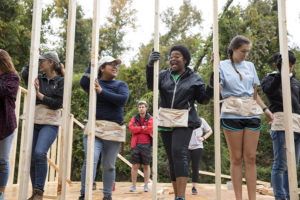 Frye is hopeful that this conversation starter could lead to more small homes being built in Athens. “Land cost is a major part of the issue here. If we can reduce the lot size and the size of the home, everything will be more affordable,” said Frye. “We’ve already had some great conversations with the mayor and commission about land use and building codes. This home has allowed us to explore both housing size issues and sustainability issues.”