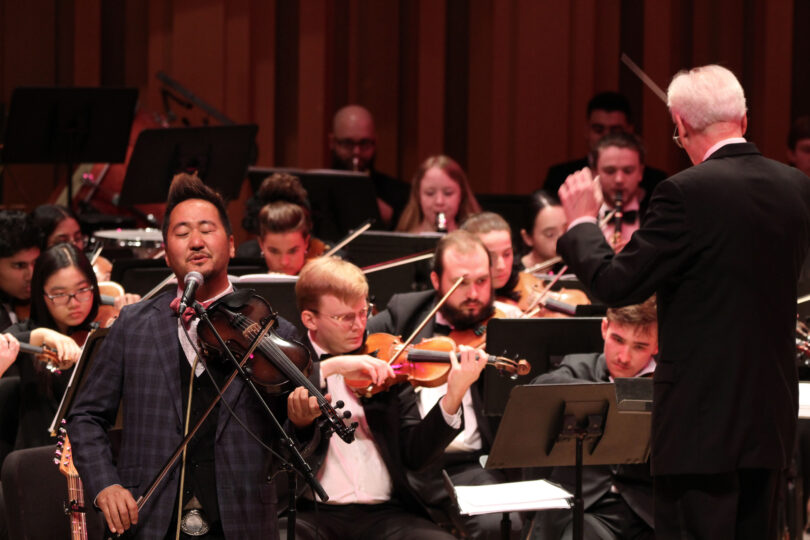 Experiential learning at UGA gets students out of the classroom and into the world, working alongside professionals in their fields of study. In October, the UGA Performing Arts Center and the Hugh Hodgson School of Music created a collaboration between the University of Georgia Symphony Orchestra and world-renowned Athens indie musician Kishi Bashi.

A sold-out concert at Hodgson Concert Hall with conductor Mark Cedel showcased Kishi Bashi’s singing, songwriting and multi-instrumental talents. It also put the 90 orchestra members outside their comfort zone, in a pop setting instead of their usual classical one. Kishi Bashi performed a dozen tunes from his catalog and even improvised a new tune with the orchestra—no sheet music, just call and response.

“It was great. It was a lot of fun,” said co-principal viola Ava Cosman. “Fun to play. Fun to be there. Fun to watch. Fun to have the audience involved like that. Good time.” 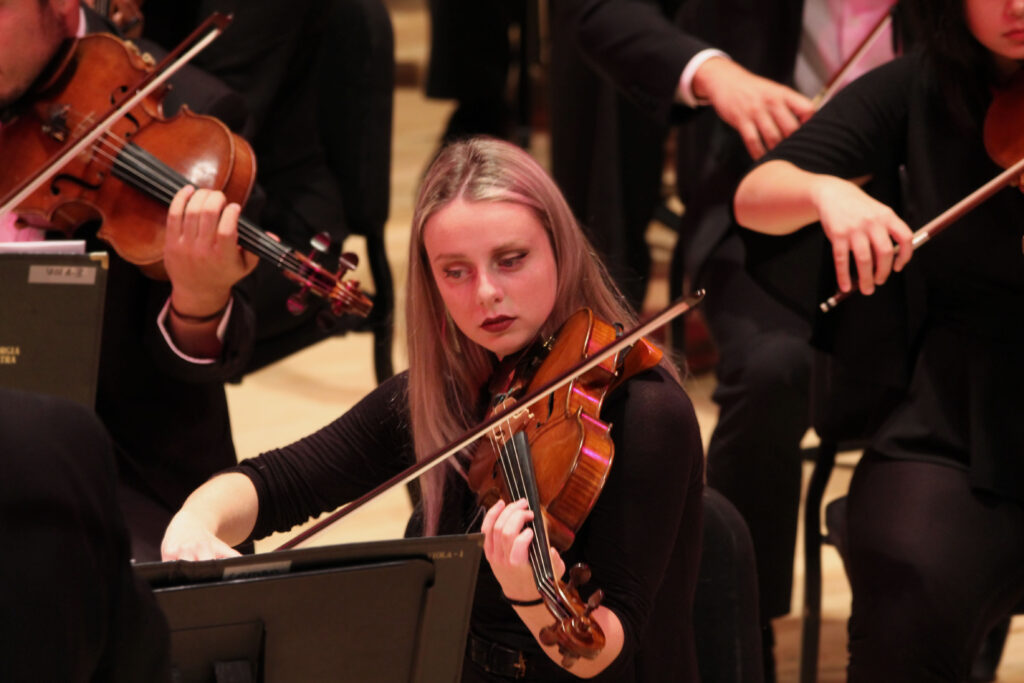 No one was more thrilled by the orchestra than Kishi Bashi himself. The artist, whose name is K. Ishibashi, has appeared with the St. Louis, Oregon and Virginia symphony orchestras. In this concert, he was visibly moved by the sweep and grandeur of the UGA Symphony.

“It was beyond what I expected,” Ishibashi said. “Honestly, I didn’t know how great the student symphony was. A lot of times professionals will have better instruments, so it’ll be better. But the UGA Symphony has graduate students, and they all had beautiful instruments. So, the string section sounded just as good. I thought it was really strong. They have some professional level players in there.”

The process of becoming a professional musician isn’t limited to practice time and lessons. It’s also about being well-rounded and gaining experience in vastly different kinds of repertoire. The Performing Arts Center routinely hosts master classes with artists appearing on the UGA Presents series. But the collaboration with Kishi Bashi—created after years of conversation between the artist and Jutras, and PAC Director Jeffrey Martin traveling to St. Louis to see him in concert—is new territory for all concerned. 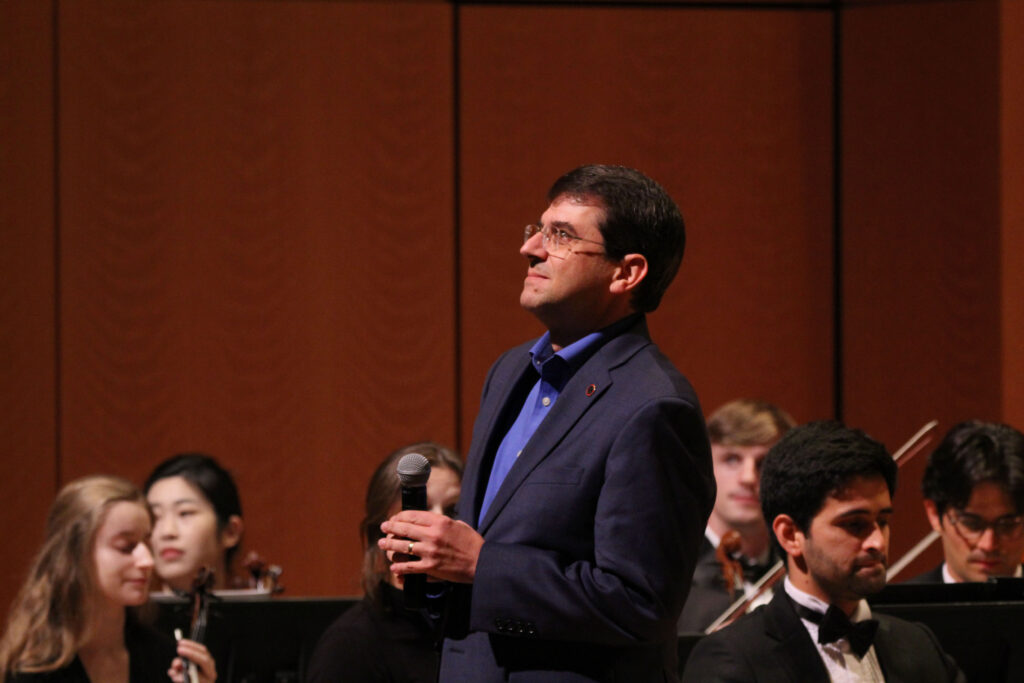 Peter Jutras, director of the School of Music, takes the stage during the University of Georgia Symphony Orchestra’s collaboration with Athens musician Kishi Bashi. (Photo by Francisco Cardoso of Easel Photography)

“If you look at the Atlanta Symphony season or any major orchestra,” Jutras said, “they’re doing a lot of concerts like this with pop artists from a variety of styles. Not necessarily indie pop, but it could be R&B or it could be rock.”

Or hip-hop. In 2014, the Seattle Symphony performed “Baby Got Back” with Sir Mix-a-Lot. Two weeks after the Kishi Bashi concert, the Athens Hip-Hop Harmonic, a project connecting student and faculty musicians with local hip-hop artists, made its Hodgson Concert Hall debut.

“I think we want to continue to present concerts of the highest quality, whatever the genre of music,” Jutras said. “We’re still going to play classical repertoire and do a lot of that and do it really well, but at the same time, I think we want to broaden and diversify the kinds of things we’re both presenting to our audiences and having our students learn and prepare for.”

Projects like the Kishi Bashi concert and the Hip-Hop Harmonic also connect the music school and the Performing Arts Center with the huge local music community.

“Athens has always been known for its great music scene, and people have not always included the Hugh Hodgson School of Music in that scene, or in their thoughts about music that’s going on in Athens,” Jutras said. “And to be fair, we haven’t included Athens musicians in what we do here historically, and we’re both doing such great things in the field of music. Why shouldn’t we work together? This is a unique opportunity that students here at UGA have that doesn’t exist in other places.”

“I can say that it’s different than what we’re used to doing as students here,” Cosman said of the Kishi Bashi concert. “I mean, we focus usually on a lot of academic work, right? And getting the opportunity to play something that’s more accessible to a wider variety of people? I think it’s helpful for those who truly wish to do more work with a broader audience. The variety is nice.

“And it doesn’t hurt that it was packed.”