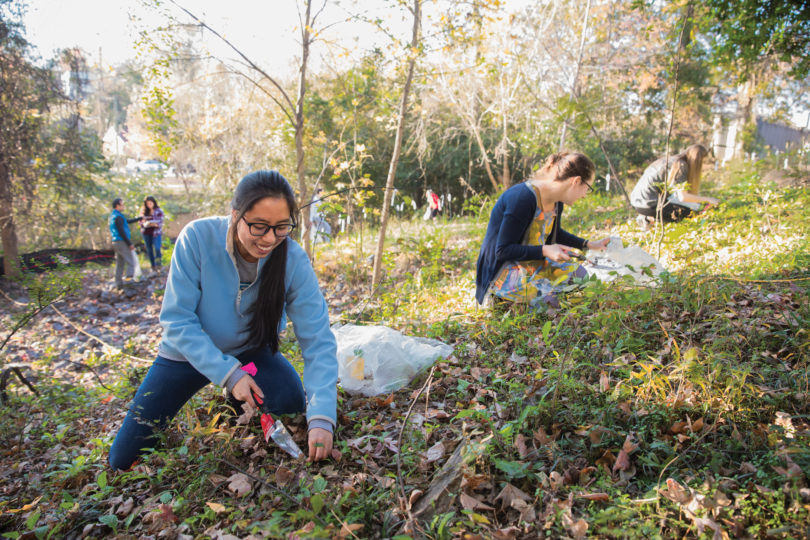 Students are taking a lead role in building a sustainable campus

When promoting a sustainable, eco-friendly campus, creating a streamlined recycling system is considered low-hanging fruit. Making it just as easy for someone to recycle a plastic bottle as it is to pitch it in the trash means it’s much more likely that person will recycle it. But with a campus so large (762 acres and over 400 buildings) and complex (17 schools and colleges, and over 7,000 staff), even the easy pickings take careful planning and execution.

For UGA’s campus, one student stood up to the challenge. During his internship in the university’s Office of Sustainability, Mason Towe AB ’16 devised and executed a plan for improving trash and recycling collection on the Athens campus, placing about 1,500 bins in nearly 200 buildings.

UGA is committed to minimizing its environmental footprint. And while the university leverages faculty and staff expertise in those efforts, students like Towe have consistently been a driving force.

About 10 years ago, a student coalition called the Go Green Alliance launched a campaign that led to the creation of the Office of Sustainability by then-President Michael F. Adams. UGA students overwhelmingly passed a referendum to establish a new mandatory green fee, which the Board of Regents later approved, to support the office’s coordination and promotion of campus-wide efforts. 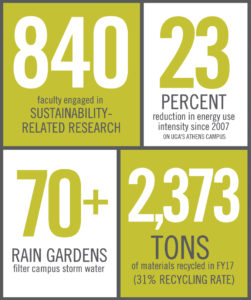 Now the Office of Sustainability coordinates a range of green campus initiatives—from low-emissions transportation projects to water quality and conservation, from campus composting to green roof gardens. Through the processes of research to implementation, UGA students play a vital role in all of it through their passion and innovation.

Thanks to a sustainability grants program, students have fueled new ideas such as the Tanyard Creek Chew Crew, a team of goats that gnaws through invasive plants on campus, to the Bulldog Bikes program, which offers free bicycle transportation on campus. The sustainability office also employs 24 interns from a variety of majors. 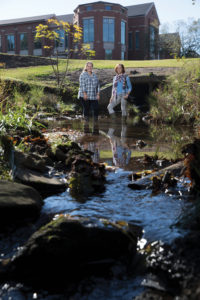 Students Madison Crosby (left) and Gabi Rosenthal are working together to raise awareness about watersheds on UGA’s campus.

Two of them—Madison Crosby, a student in the Odum School of Ecology, and Gabi Rosenthal, a photography major in the Lamar Dodd School of Art—are working together to raise awareness about watersheds on UGA’s Athens campus. The campus is home to multiple waterways, including a stream that runs under Sanford Stadium. To keep trash and other contaminants out of the water, Crosby and Rosenthal are leading campaigns to teach their peers about the watersheds.

Rosenthal, an aspiring commercial photographer, runs the Watershed UGA social media accounts. She says her internship gives her a lot of freedom to learn and to apply some of the skills she’s developed in the classroom.

“It pushes me creatively and makes me feel like I am doing something valuable,” she says.

Early in his college career, Towe, an economics and sociology double-major, was feeling adrift. He was looking for some inspiration when he met for coffee with Kevin Kirsche BLA ’98, MLA ’08, director of sustainability. Following their conversation, Towe took a waste-reduction internship in the Office of Sustainability. The decision shaped the rest of his college experience and helped lead to a budding career in recycling and waste reduction.

For his final project, Towe’s challenge was this: organize trash and recycling bins in all campus buildings, making sure they were side-by-side and convenient. Kirsche says the project was more complicated than it sounds. Each building has a unique floor plan as well as a building supervisor who needed input on the plans. It took visiting every building on the main campus, looking at blueprints, and working with campus staff to find the best paths to secure, deliver, and install the bins. 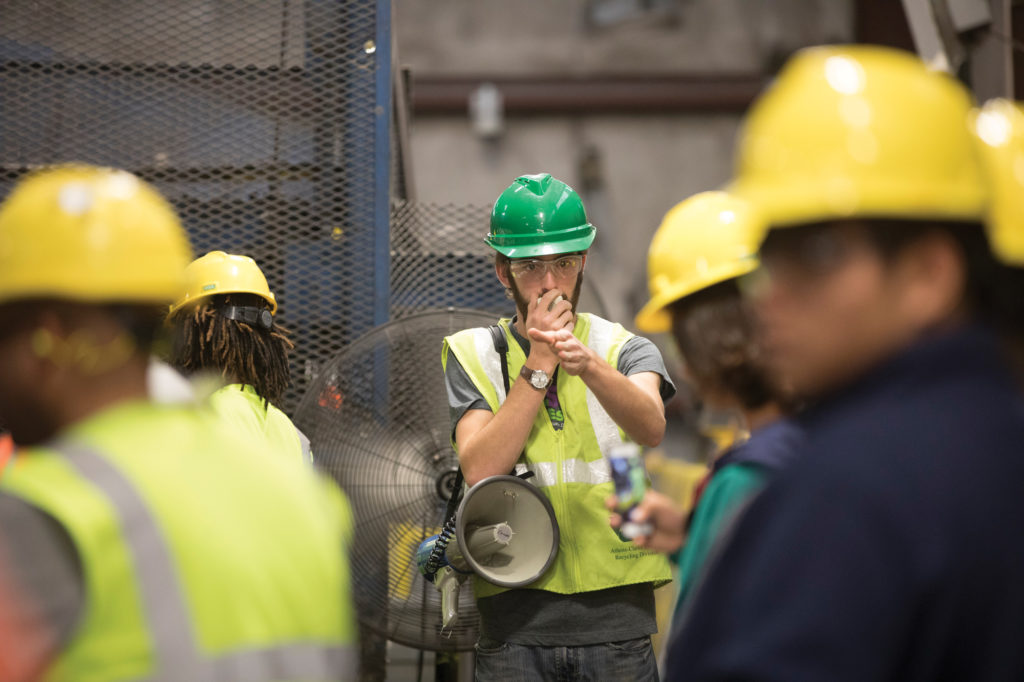 Mason Towe completed an internship with the Office of Sustainability in 2017. Now, he’s a program specialist at the Athens-Clarke County recycling division.

“We didn’t tell him how hard that is,” Kirsche says. “We gave him this goal and set him loose.”

“I met pretty much every building supervisor on campus,” says Towe, who got a rare behind-the-scenes look at how campus facilities are run.

Towe’s work as a student inspired his career. Now, he is a program education specialist for the Athens-Clarke County’s recycling division, where he informs Athens-area residents how to effectively recycle.

His career goals focus on a commitment to reducing waste and finding new ways to reuse the materials that are usually discarded.

And it all started with the passion and skills he honed as a student.